Beamdog [Official Site] have officially announced their next revamp of a classic with Neverwinter Nights Enhanced Edition. I have it confirmed it will be on Linux too.

See Also: My interview with Beamdog earlier this year.

Their official press details sent out to me clearly listed Linux as a release platform, as expected, since their previous revamps are also on Linux. Really great to see another classic get a refresh, but not only that, to see it get proper official Linux support.

For those that don't remember, Neverwinter Nights did actually have a Linux version, although it wasn't well supported, so it's fantastic that we get it properly this time.

With that out of the way, here's the trailer: 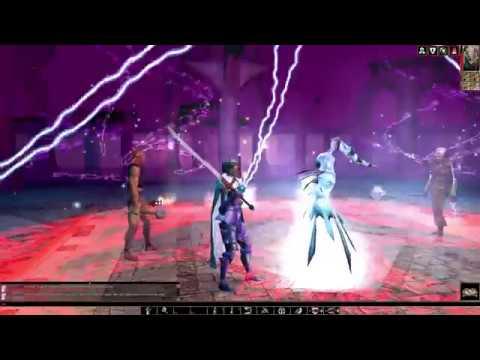 From the press email I woke up to today:

We are incredibly proud of the work the team has done so far on Neverwinter Nights: Enhanced Edition, and with the community’s feedback, we will continue fixing bugs and adding features for launch. We’ve added an improved display that looks great on modern 4k monitors, UI elements now adjust in size based on chosen resolution, and post-processing effects make for crisper, cleaner visuals. Save games, modules, and mods from the original Neverwinter Nights work in the Enhanced Edition.

Here's what it will include:

They will be doing a livestream later today at 8PM UTC on their official Twitch channel, where they will give out more info. The official site will be up here, likely once the livestream is over.

Beamdog said that pre-orders will go live today and the game will cost $19.99, it should also get a Steam page later today too. On top of that, Beamdog will be selecting players from the pre-order pool for their "Head Start program" to "play, import modules, and update persistent world servers early".

They will also be doing a Digital Deluxe bundle, which will include Pirates of the Sword Coast, Infinite Dungeons, and Wyvern Crown of Cormyr), two soundtracks collecting all of the original music, and a new portrait pack. Each DLC will also be sold separately for those that don't want it all.

I am the owner of GamingOnLinux. After discovering Linux back in the days of Mandrake in 2003, I constantly came back to check on the progress of Linux until Ubuntu appeared on the scene and it helped me to really love it. You can reach me easily by emailing GamingOnLinux directly.
See more from me
Some you may have missed, popular articles from the last month:
The comments on this article are closed.
74 comments
Page: 1/8»

EDIT: What about the expansions? They were the most fun - Shadows of Undrentide and Hordes of the Underdark

View PC info
Will they also redo the NWN editor (if so, on Linux too? the original was specific to Windows) or is it only the game itself?
0 Likes

Quoting: abelthorneWill they also redo the NWN editor (if so, on Linux too? the original was specific to Windows) or is it only the game itself?

I'm afraid the editor was not mentioned in the press details.
1 Likes, Who?

View PC info
Sweet! =D Neverwinter Nights was always my favorite of the classics. Glad to see it get a revamp. :)
0 Likes

If there's no editor (even if the editor is Windows/Mac-only), then I wouldn't consider buying this.
0 Likes

Janne 21 Nov, 2017
View PC info
Penultima by Stefan Gagne was by far the best campaign; better than any of the official campaigns in the series. I'd consider getting NWN again just to play that one again.
0 Likes

View PC info
OMG, OMG, OMG! This sounds almost too good to be true. I really liked the original and played the expansions as well (Hordes of the Underdark was great) not to mention the sequel from Obsidian. Yet I never dared to hope I'd see a new updated version, I was sure Beamdog would never move beyond the isometric "infinity-engine" games.

I'll pre-order this for certain.
0 Likes

View PC info
I was hoping for IWD2 EE but this isn't bad either! :D

They can't find the original sources for IWD2, though, so there's currently no plans for IWD2:EE: http://blog.beamdog.com/2017/07/real-talk-icewind-dale-ii-enhanced.html
0 Likes
1/8»
While you're here, please consider supporting GamingOnLinux on: