For those in need of a good RPG to play on Linux you're in luck, as Neverwinter Nights: Enhanced Edition [Steam] is now officially available with day-1 Linux support. 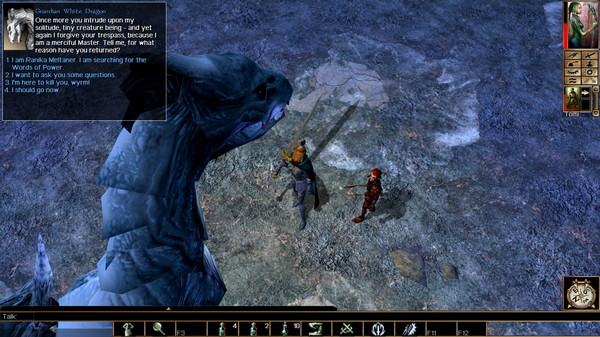 Note: My copy was provided by Beamdog.

They're also including all the content from Neverwinter Nights Diamond Edition, so you get the Shadows of Undrentide and Hordes of the Underdark expansions as well. As it's on Steam, it comes with Steam Workshop support.

On top of this, Beamdog have said that development will be ongoing. The released version is just the start, they do plan a graphical overhaul and they will have a Steam beta up for people to test what they're working on.

Honestly, there's not a huge point in doing a traditional review, since the story hasn't changed and it's been around since 2002. I can say, since the earlier versions I tested, some Linux-specific issues like cursors vanishing behind the UI and some sound issues have been solved so the Linux version is working rather nicely.

In regards to the editor being Windows-only, it is on the Roadmap to make a version that's cross-platform, but it's in the "Icebox" section, which is items they want to do, but aren't the highest priority.

Find Neverwinter Nights: Enhanced Edition on Steam now. As for a GOG release, they told me directly they don't have any dates lined up yet, but it sounds like it's not off the table.

View PC info
I wonder what delayed their GOG release. They didn't have problems with their other games in the past.
3 Likes, Who?

View PC info
Curios when that editor comes out.
Never did play with it in the initial game which was Win only.
Truth be told , NWN was the first D&D experience I had and by far sucked at the most.
0 Likes

For those that never played... Deekin is a NPC... a kobold Bard. He has the best lines in the game if you let him join your party.
4 Likes, Who?

View PC info
Bought, together with "Wywern Crown" & "Pirates" DLC. However, I think I´ll wait a bit with playing since my cursor got a little displaced after I enlarged the gui and changed a few graphical settings.

I´m also currently having a surprisingly good time with "Vendetta-Curse of Raven Cry". Bought it very cheaply on sale with minimal expectations, but to my surprise the missing 1.10 patch had been added to linux and the game has been rather fun as well as bug & crash free for 5-6 hours now.
1 Likes, Who?

View PC info
I will just leave this here from Beamdog CEO:


QuoteHappy to support a great OS

Here's what they said about GOG.
0 Likes

View PC info
Bought it. For full price, which I normally don't do. In return, I -really- hope to see the Toolset on Linux on day!
0 Likes
etonbears 27 Mar, 2018

Quoting: razing32Curios when that editor comes out.
Never did play with it in the initial game which was Win only.
Truth be told , NWN was the first D&D experience I had and by far sucked at the most.

Using the editor was quite a nice experience; relatively easy to learn, and did what it needed to.

The biggest problem was that NWN1 mods were based on assembling playing areas from pre-existing rectangular tile sets, for both interior and exterior scenes, which could be quite limiting even 15 years ago. It produces OK interiors, as one is generally accustomed to rectilinear architecture, but creating good exterior areas is challenging.

You would definitely want to trawl through the community content to find additional tile sets, since exterior features like buildings, city walls, cliffs and so on have to be part of a tile - you can't just drop a wall or building onto a flat piece of ground as you might expect.

Other limitations I recall were a fairly small area size limit ( 32x32 tiles I think ), and no proper Z axis ( you can have height variation, but there is a single "walk-mesh" surface that can only have one Z value for any given X and Y ( so if you have a tile containing a bridge, it will either be one you can walk over or one you can walk under, but not both). The "walk-mesh" is created as part of a tile, so it is not something a toolset user needs to worry about.

Creating new tile-sets and other model content is NOT part of the toolset as far as I recall, and is obviously more complex.
2 Likes, Who?

View PC info
Tried to buy the game directly from their Beamdog client, but you end up buying from their site. Any idea if they track Linux sales this way?
0 Likes

Quoting: etonbearsThe biggest problem was that NWN1 mods were based on assembling playing areas from pre-existing rectangular tile sets, for both interior and exterior scenes, which could be quite limiting even 15 years ago. It produces OK interiors, as one is generally accustomed to rectilinear architecture, but creating good exterior areas is challenging.

The simplicity allowed single creators to rapidly make a large numbers of areas though, which I believe had no small part in drawing in so many creators. NWN2's area editor was more powerful, but also much more tedious to use. I don't believe it's a coincidence that NWN2 had dramatically fewer games made with it than NWN. And both editors don't remotely compare to full-blown game engines, where you can't even build a garden shed in any reasonable amount of time.

Personally, I think the trade-off was very acceptable and a smart move by NWN devs.
0 Likes
1/3»
While you're here, please consider supporting GamingOnLinux on: