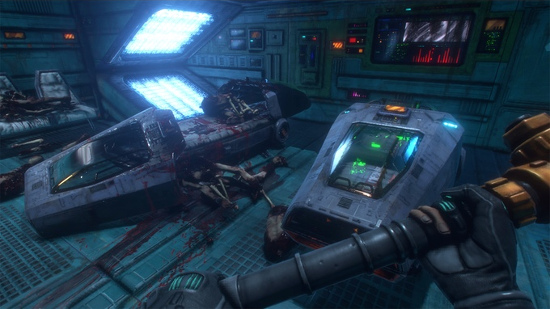 Nightdive Studios are confusing me a little, but they are now at least making a Linux demo which will have a closed beta period.

You can see their Steam forum post here. They stated later they are now doing it as they have heard us. Mac apparently is a lower priority as Linux has been in higher demand.

Initially they stated they don't know when the new System Shock will have a Linux release, then it was pointed out in a comment that no one at Nightdive Studios uses Linux, and now they claim one person does have a Linux machine.

I'm a little dizzy from that, different answers from different people in a small studio.

In the end, I just hope it has a proper Linux version and it works well as I do want to play it.

You can find their Kickstarter for the new System Shock here. They are well on their way towards hitting the 1.1million dollar stretch goal for the Linux version. Article taken from GamingOnLinux.com.
Tags: Demo, Steam, Upcoming
0 Likes
Share

I am the owner of GamingOnLinux. After discovering Linux back in the days of Mandrake in 2003, I constantly came back to check on the progress of Linux until Ubuntu appeared on the scene and it helped me to really love it. You can reach me easily by emailing GamingOnLinux directly.
See more from me
Some you may have missed, popular articles from the last month:
The comments on this article are closed.
18 comments
Page: 1/2»
WienerWuerstel 2 Jul, 2016
View PC info
Nice to see that they'll release a demo for Linux. I sent them a message about that on Kickstarter and it seems that enough people asked for a Linux demo. Let's just hope that the demo arrives before the Kickstarter campaign is over.
2 Likes, Who?

View PC info
I wonder if the positive experience/feedback the LED devs received had any influence on this decision?
0 Likes
WienerWuerstel 2 Jul, 2016
View PC info

Quoting: zimplex1I wonder if the positive experience/feedback the LED devs received had any influence on this decision?

Highly doubt that. It's just that enough Linux users asked for a demo.
0 Likes

Quoting: liamdaweYou can see their Steam forum post here. They stated later they are now doing it as they have heard us. Mac apparently is a lower priority as Linux has been in higher demand.

That's interesting, and that's got to be a first for me at least.
Hopefully the demo can be solid.

I just get the feeling at first, they didn't have a linux machine, after gathering feedback, they find a spare pc in the basement somewhere cause they hade to look for something that could run linux.
And now "they have" a dev that's using linux.

Im joking, this is a good thing, and Im surprised that Linux is a higher priority then Mac.
And Im cool with them suddenly change there answers on Linux, there is probably reason they couldn't speak to mutch about it in the past, but now when the demand is bigger they can commit more to a linux port, instead of just making a linux port cause they just want to support linux or cause it was a kickstarter goal.
2 Likes, Who?
BOYSSSSS 2 Jul, 2016

View PC info
I hope the remake of System Shock is successful so they have incentive to remake System Shock 2 too :P Really loved that game back in the day, but now the graphics are too outdated for me.
0 Likes

Quoting: liamdaweMac apparently is a lower priority as Linux has been in higher demand.

That's interesting, and that's got to be a first for me at least.


It may simply be that Linux users are more active in finding what's out there and Mac users are more passive and simply buy what's available. If that is the case, Linux may be a more interesting target for crowd funding.
3 Likes, Who?
JudasIscariot 2 Jul, 2016
View PC info
Good to hear as the Windows version uses DX11 :)
1 Likes, Who?

Quoting: Zelox. . . they didn't have a Linux machine, after gathering feedback, they find a spare pc in the basement somewhere cause they hade to look for something that could run linux . . . now "they have" a dev that's using linux . . .

The reality behind this statement belies every game dev who has ever tried to pass-off a shoddy Linux port with the excuse, "We can't do QA on our Linux port because we don't have a Linux machine." Sheesh.

Anyway, I too was tickled to hear Linux given higher priority than Mac. And I'm thinking that, as time wears on, this will become more and more commonplace. Linuxians seem on the whole louder and more persistent than our be-fruited comrades with Macs. (And also there's the whole Valve / SteamOS thing. That prolly helps add mass to our momentum) :)

View PC info
I too sent Nightdive Studios an email on the Linux demo:

How do you expect Linux users to back this, without
guarantee?

How about making the demo available for us to test? So
that we can work towards your stretch goal at the very least.

Of course, Linux and OSX shouldn't even be stretch goals IMO. It makes us
feel like second class citizens, again. Just saying that you'll make a
Linux port doesn't suffice.

We'd love to back you up, but we need something tangible for it first. I
hope you understand.

QuoteWe're working on demo versions for addition platforms including Linux,
please keep checking back on Kickstarter for updates :)

Thanks for your support!

View PC info
A bit confusing true, but hey I'll deal with a bit of confusion if that means a Linux port comes out the other end.
0 Likes
1/2»
While you're here, please consider supporting GamingOnLinux on: