Paradox Interactive have purchased the rights to Prison Architect from Introversion

This is a very curious one, Paradox Interactive have just announced that they've acquired Prison Architect from Introversion Software. 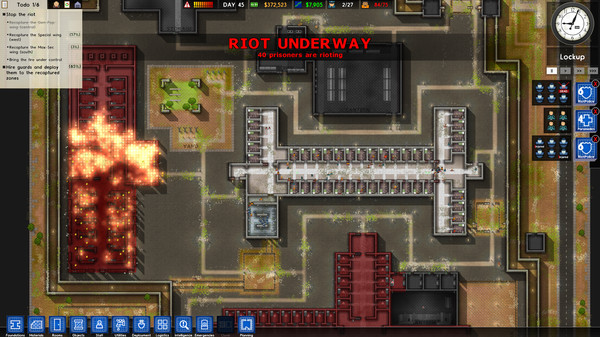 This isn't the usual thing here that we've seen before as Paradox aren't taking over Introversion Software, it's very specific to the Prison Architect game. As they said in their press release:

Paradox will take ownership of Prison Architect on all current and any future platforms, including Windows, MacOS, and Linux PCs, and Switch, Xbox and PlayStation consoles, in addition to their ongoing publishing of Prison Architect: Mobile on iOS and Android tablets. This acquisition also allows Paradox to continue development of Prison Architect going forward, and to explore opportunities with the wider “Architect” IP in the future.

From that same release, Introversion's co-founder Mark Morris said he felt they had taken it as far as they could and that they're "eager to see where a team like Paradox can take it next". This also gives Introversion room to breathe life into their next project (and no doubt plenty of money to help too…).

I'm a big fan of the game myself, I've sunk many great hours into it and having it in the hands of Paradox who've supported Linux very well over the years is a good fit I think. Paradox support their titles for many years after release, far longer than a lot of others do and that makes me happy about the future of Prison Architect.

You can find Prison Architect on Humble Store, GOG and Steam.

It will likely show up on Paradox's own store sometime soon, perhaps this is another step towards a larger push for their own store? They do already have their own launcher, which supports Linux. It wouldn't surprise me if we saw them acquire more across this year.

View PC info
Didn't see that coming! PA is a damn good game though, and Paradox must see further potential to make this something worth doing. I'm excited to see where they take it.
3 Likes, Who?

View PC info
Strange indeed. They must be seeing potential way past the game the devs declared finished last year (but still kept making updates for). I am not complaining, though. PA is a great game and it couldn't have gone to better hands than Paradox. If I think about the most Linux-friendly publisher put there, their name tops the list every single time. I am looking forward to what they can do with it. Better graphics, maybe? More items to build with?
3 Likes, Who?

The only thing which sounds a bit bad is

QuoteIt will likely show up on Paradox's own store sometime soon, perhaps this is another step towards a larger push for their own store? They do already have their own launcher, which supports Linux. It wouldn't surprise me if we saw them acquire more across this year.

I mean as long as all upcoming Paradox games will be on Steam i dont mind. But another exclusive store? Please no...just stop it.
1 Likes, Who?

View PC info
Weird, but why not.

I never really got into this game, even if i love it on paper.

Very curious to see the secret deep "why" Paradox did that.
1 Likes, Who?

View PC info
Surely they must have in mind a sequel?
2 Likes, Who?

thelimeydragon 8 Jan, 2019
View PC info
Prison Architect RTS edition.. play as one of many prisoners building a network of relationships.

8 Jan, 2019
View PC info
This makes absolutely no sense! Unless... wait! PA will be released as a medieval dungeon DLC for CK2 or maybe even EU4. Once you uncover a plot against your sovereign and arrest the plotters, you'll have the option of sticking them into a cell at which point a minigame will become available where you try to escape jail.

Quoting: pbSo much for free updates, welcome a swarm of dlc.

That wouldn't be a bad thing. If you're happy with the value you got from the game's purchase, fine, just ignore the DLC. If you loved the game and would welcome more features and expansion, this is great news.

They could add a campaign and make the game interesting.