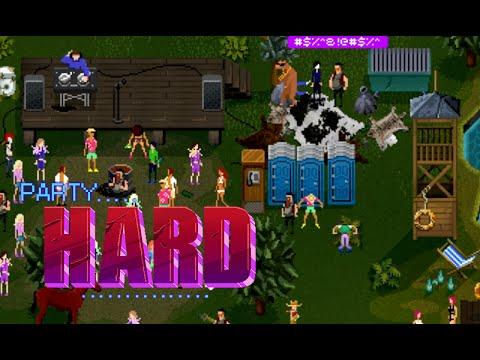 A pretty brutal setting, but remember kids it's a game and "don't try this at home".

About the game
In Party Hard, you play as someone who is really tired of the neighbors having loud parties. Instead of calling the police, you decide it’s a better idea to kill everyone – using your faithful knife and the environment. The tactical strategy follows a series of killings at parties through-ought the USA.

The developers used to work mostly on casual, family-friendly games - until they participated in a game jam, creating the first prototype for Party Hard. TinyBuild backed up the original developers – Pinokl Games – to create a full version that’s coming to Steam on August 25th.

Party Hard has semi-procedural environments and focus on unique ways of killing people. In the greatest traditions of sneaking games, your main goal is not to get caught, while silently picking off unsuspecting victims one by one. Dancing and blending in during a suspicious situation is key.

You can find Party Hard on Steam. Article taken from GamingOnLinux.com.
Tags: Stealth, Steam, Strategy
0 Likes
We do often include affiliate links to earn us some pennies. We are currently affiliated with GOG, Humble Store and Paradox Interactive. See more here.
About the author - Liam Dawe

View PC info
It's pretty addictive! At first I thought it lacks variation but having finished 6 levels at so far there was plenty.. =)
0 Likes

View PC info
Want to buy more levels since I have already finish the game in less than 2 days from release day... :'(