Now that Phoenix Point [Official Site] from Snapshot Games has a Linux version out, I've managed to put some time into it and as a long time XCOM fan I'm very impressed. Obviously a full review can't be done right now, since it's nowhere near finished so that will be reserved for the final release. However, I do have a few thoughts to share on the general experience.

For those who've played XCOM or any similar strategy game, you will feel instantly at home. While it does have its own unique features, it still shares so much of what makes XCOM good. Honestly, it's strikingly similar to XCOM in a lot of ways, like a weird twin-brother it never knew. It's not surprising of course, since Snapshot Games includes Julian Gollop who's known for creating UFO: Enemy Unknown which Firaxis Games later reinvented with XCOM: Enemy Unknown.

The cover system is much the same, the movement feels similar and so on. It does have a few key differences though, like being able to zoom in while targeting an enemy which gives you the ability to pick a specific body part to fire some rounds into. 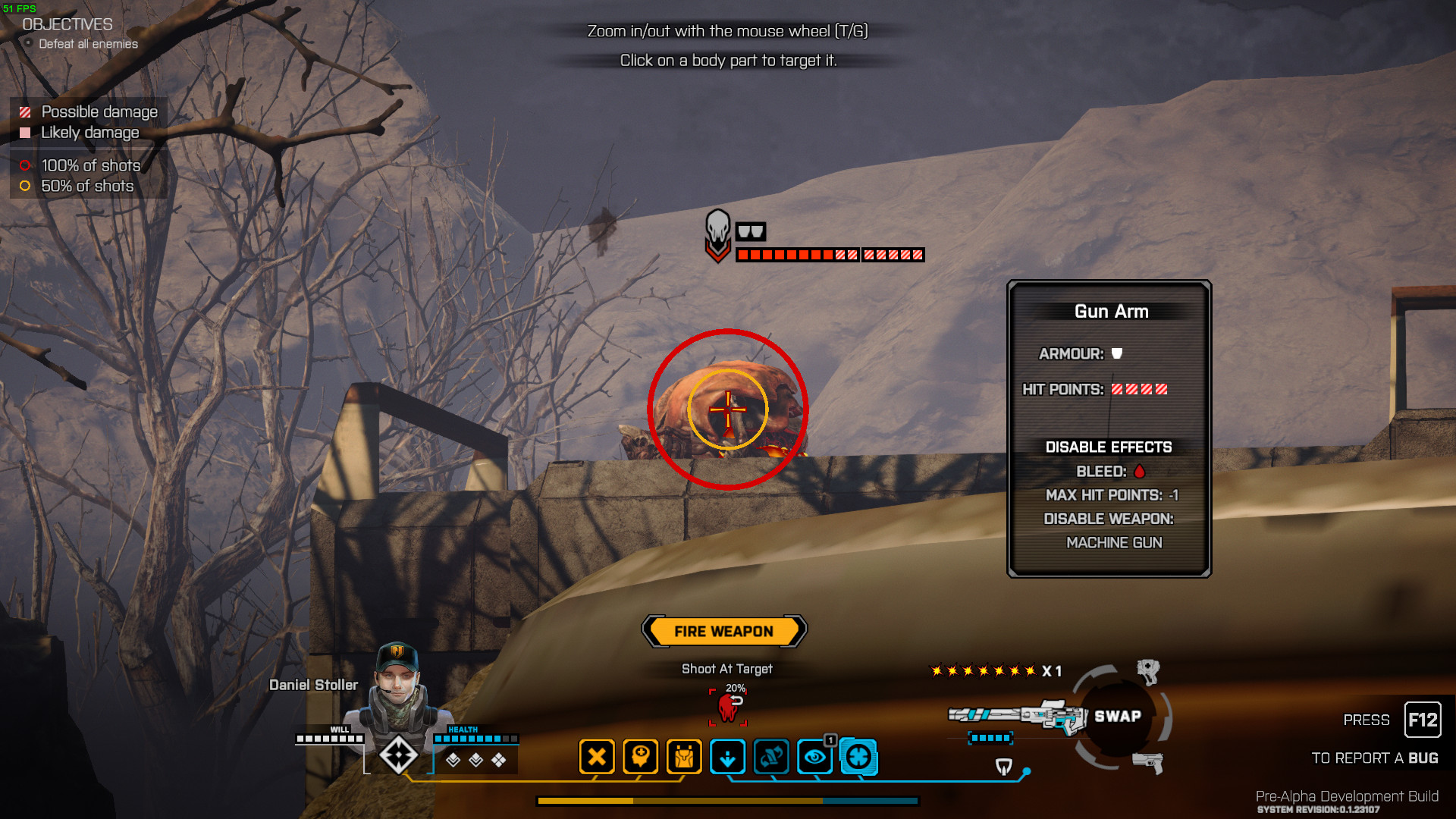 The actual combat is a little on the different side too. Your bullets aren't just for show (unlike other games), as each of them will follow their own path and inflict damage on anything it hits. As I found out when I had a soldier positioned between another of mine and an enemy, I totally missed and hit my own guy—woops. The picture above show that half my bullets will hit inside the orange circle, while the rest could be anywhere within the red circle, so you can see a bunch of my bullets would likely hit the wall. There's also a difference between actual damage, possible damage and the ability to disable body parts and carried equipment. I've had a soldier have their weapon destroyed and their arms disabled, while enemies were chasing them down.

That alone makes it feel quite fresh, but it's certainly not the only difference. While moving your mouse around, you will also see either white or red lines pointing towards a box of items or enemies you will be able to target—very useful. 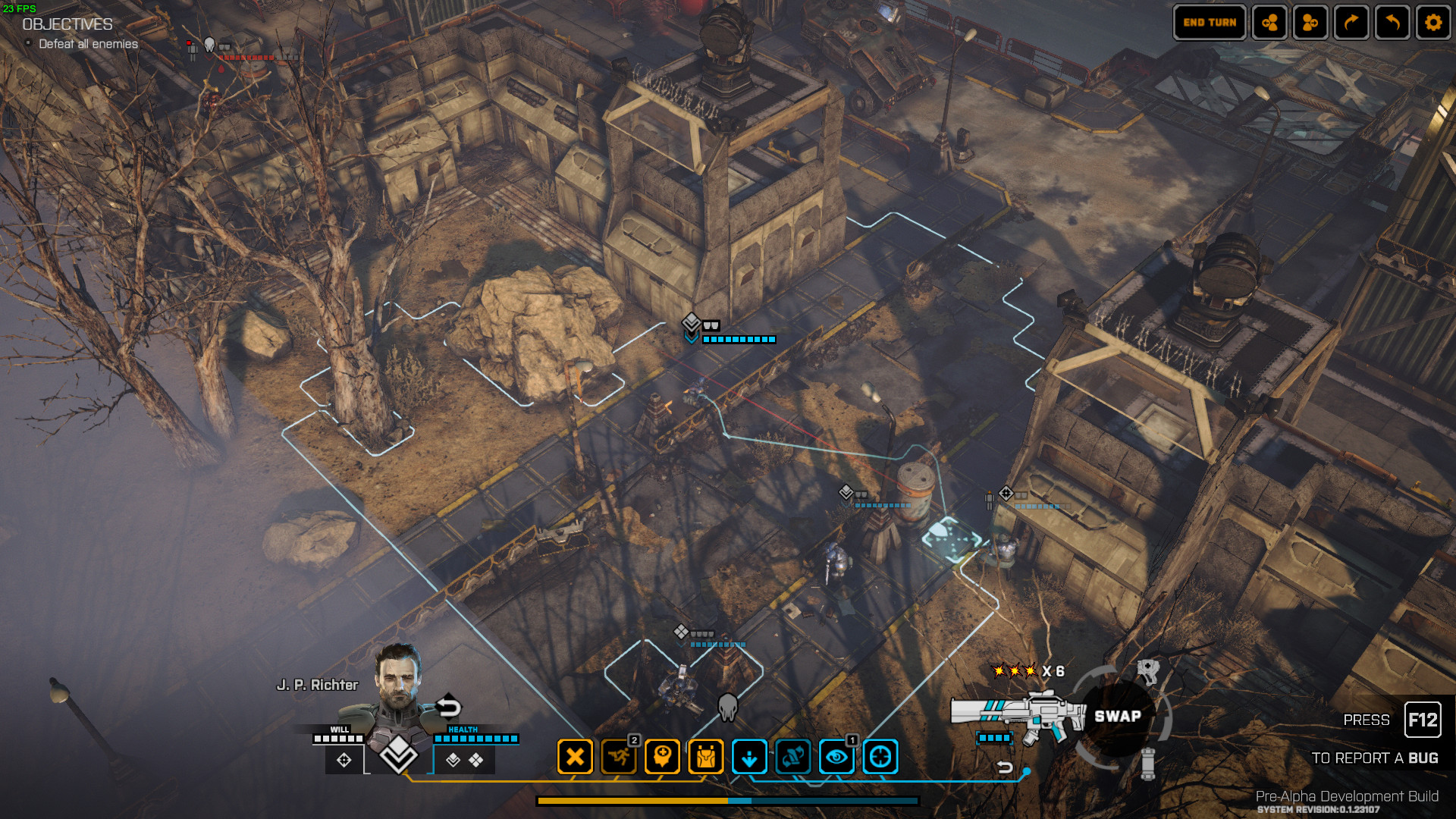 You can just about make out the red line pointing to the enemy here.

It's all about the small changes. The developers already clearly know what worked before, so it's not exactly a huge evolutionary leap in terms of mechanics and the interface, but more about how they can tweak it in various ways to make all of it feel better.

The action point system is also quite different, you can generally do whatever you want as long as you have the points available on each character, which is defined by the bar at the bottom of the screen. There are still some limits, like movement within a blue or yellow zone where staying inside the blue zone would allow you to use your selected item at least once. It's an interesting system, certainly makes it have a different feel.

There's also the Will Points system, which allows you to perform special actions like Jet Jump. You can choose to rest a character for a turn to recover some, with other ways to earn them per-character like opening a resource crate.

Honestly, it's difficult too. I haven't been able to win, not even once. Thanks either running out of ammo or to the Crab Queen who can literally smash through buildings to get at you. 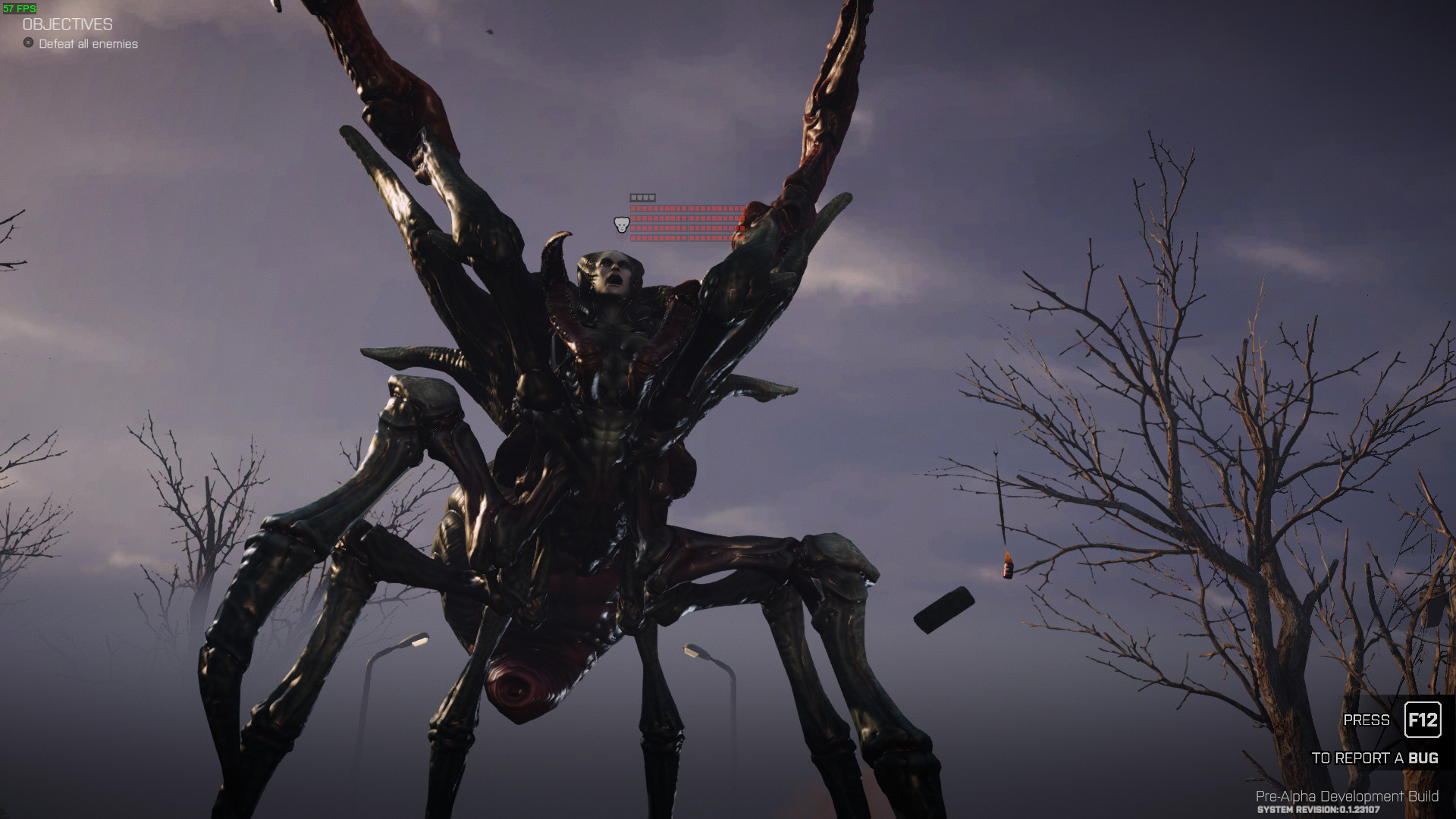 While there isn't a lot of content right now, what's there is quite easy to play through many times. They have a single main mission along with random maps, which I've already put numerous hours into and it's a delight. While it's early days yet, their new release schedule of a build every two months (the next build likely late in July, should be a nice birthday present for me) should bring us some interesting content each time.

In terms of performance, it's not great. Currently, you only get a choice between Potato quality and Fantastic, with no room in between. Fantastic quality gives me between 20-30FPS, while Potato does give me a near-constant 60FPS.

I'm not going to say it's going to dethrone XCOM 2 for me (which is fantastic), but it could with enough polish as it feels pretty good already. I will need to see a lot more of the game before I can make a decent judgement on it. However, I can say one thing for certain, I do love the instant access to the combat modes that it offers right now, so I do hope they keep them in at release.

If you wish to pick up a copy and get access to the development builds, you can do so here.

Article taken from GamingOnLinux.com.
Tags: Beta, Indie Game, Strategy, Unity
10 Likes, Who?
We do often include affiliate links to earn us some pennies. We are currently affiliated with GOG, Humble Store and Paradox Interactive. See more here.
About the author - Liam Dawe

View PC info
Gollop is a great designer so i am going to get whatever he releases. I even enjoyed his Tom Clancy Shadow Wars game on the 3DS. But seeing those screenshots and while haven't played the game yet, i think he borrowed too much from the Firaxis reboot. I hope i am wrong on this and Phoenix Dark is not that much dumbed down.

Contrary to mainstream opinion i don't believe the Firaxis Xcoms were any good. I did get them obviously for lack of too many options but i vastly prefered the earlier Xcoms, with Apocalypse being my absolute favourite and a damn masterpiece of a game.

It saddens me that 2 decades after young teenager me was immersed in Apocalypse, tactics games haven't expanded on its genius ideas. The strategic part of Apocalypse was vastly improved compared to enemy unknown, with several factions/companies operating symbiotically to each other, and losing any of those to the aliens or otherwise making them enemies would endanger xcom in various ways. The map also served a higher purpose than just "our base is situated here", with pathways being able to be destruct, assault on bases, etc. Apocalypse was so far ahead of its time. I sure hope mr Gollop implements a spiritual successor of Apocalypse some time in the future, because frankly this doesn't seem like it.
1 Likes, Who?

View PC info
Do keep in mind this is only the first in-development release. It's going to change a lot before release. We haven't seen anything outside of the combat yet either.
1 Likes, Who?

I'm not a fan of heavy use of 3D graphics for certain genres (where usually it will NOT contribute for gameplay in any aspect), but it's surely being used right on this one (pretty much like XCOM 2)...
0 Likes

View PC info
Having followed Julian Gollop's career since the days of Chaos* and Rebelstar, I have to say it sounds a lot more “Gollop-ey” than XCOM. It's funny how, although his influence is still very apparent in XCOM, you don't really notice the extent to which it isn't his game any more until he shows us how he would have done it.

Having just bought XCOM (again; I already had it on the Xbox 360) when XCOM2 came out, I still don't have the sequel. I might just give it a miss entirely and buy this instead.

*Mind you, it took me about 20 years to properly appreciate Chaos. In its final issue, the great Your Sinclair magazine named it the best Spectrum game of all time, and I couldn't understand what they were on about. It wasn't until about ten years after then that I finally “got” it. (And yes, that's the Chaos that was recently remade as Chaos Reborn.)
1 Likes, Who?

View PC info
Glad they're releasing this on GOG, I might even buy it as one of the official site's pre-order packs. I occasionally play Chaos Reborn (despite sucking horribly at it).
0 Likes

DuncHaving followed Julian Gollop's career since the days of Chaos* and Rebelstar, I have to say it sounds a lot more “Gollop-ey”

I think the proper term is Gollopesque ;)
0 Likes

View PC info
Had a look at the ingame movie...looks solid to me.
Is the price going up after launch?
0 Likes

View PC info
This alpha got me hooked already. I'm a fan of the original UFO, and though I really enjoyed Firaxis' remake, this game seems to go much closer to the roots. For those who might have only seen screenshots, under the hood the mechanics still rely on action points (much like the old TUs), it's just they are more streamlined. The orange/blue zones/bars are just visual hints, but you can do any combination of actions as long as you have points for it, in any order.

There's obviously a lot missing since it's just a taste of the 'battlescape', but it shows a lot of promise.
0 Likes

View PC info
Normally I would just avoid Pre-Orders in general but this time I made an exception, game looks awesome, can't wait to see how much it improves, wen't with the $ 50.00 tier pack...

View PC info
Thanks for trying it out and writing about it. I'm pretty interested in getting it when it's done.

TemplarGRContrary to mainstream opinion i don't believe the Firaxis Xcoms were any good. I did get them obviously for lack of too many options but i vastly prefered the earlier Xcoms, with Apocalypse being my absolute favourite and a damn masterpiece of a game.

I looked up Apocalypse on GOG due to your strong words, and I just can't play a game with graphics like that anymore.
1 Likes, Who?
1/2»