The post goes over what they've been able to achieve and it is quite impressive. Before Planetary Annihilation Inc appeared, it did seem like the game was left on life support so they've given it a big boost. A fair amount of Planetary Annihilation: TITANS was getting old, so their first point of action was to upgrade the underlying tech to be more modern. Along with that they also upgraded the AI, put a fair amount of effort into their servers to improve performance, gave it more multi-threading and so on. 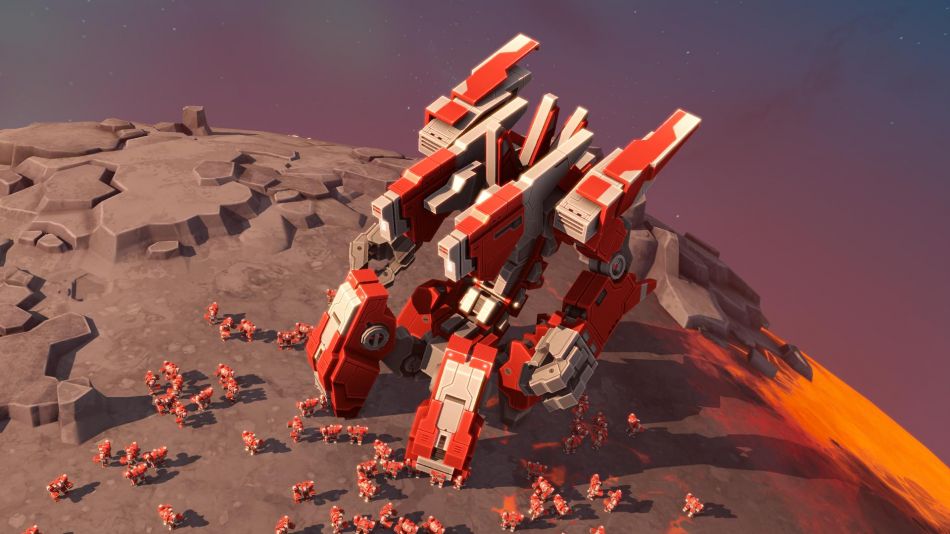 One lingering issue on Linux, is that it doesn't work right on AMD GPUs with Mesa and hasn't done for a long time. They're fully aware and it seems it hasn't been forgotten about, as they said "We are aware of the Linux Mesa issues so please hang tight, we’re working on it!".

They also just recently put out another small update which updates Naval units speed, since naval battles could end up far too slow along with even more AI improvements. They also noted that "It has been a great year and we look forward to an even better one to follow.", so it sounds like they have more fun stuff to come.

Additionally, they have a really interesting development timeline up that's worth a little look, giving a little history behind it all.

Really glad to see such effort being put into TITANS, as it remains a seriously fun grand-scale RTS. I've got a lot of hours in it personally and I come back to it often. There's just something incredible about hundreds of units flowing towards each other, explosions everywhere and just when you think you've won, another player crashes an entire moon into you—ouch.

Article taken from GamingOnLinux.com.
Tags: RTS, Steam, Strategy, Update
8 Likes, Who?
We do often include affiliate links to earn us some pennies. We are currently affiliated with GOG, Humble Store and Paradox Interactive. See more here.
About the author - Liam Dawe

It's really weird because when the main interface goes black you can't even click on the elements that are invisible, like it's not even trying to draw them...
0 Likes

View PC info
I like that they're going to focus a bit on naval, I think it is underexploited. I mean, you have flying, land and space units. Most buildings can only be built on land. So why use naval units?

They were already quite powerful, and long range. Now they are quick as well... But usually, you only get one spot of water, and if your enemy controls it, you just avoid it.

They could make it of a more strategic importance, like if energy generators were to produce more when placed in water bodies (that's an interesting idea, which makes sense, I'm probably going to ask them).

I'm quite excited to hear about the mesa fixes, they weren't so nice to play with. Here's what I wrote about the workarounds i found. Unfortunately, they do not work for everyone, and the game still crashes sometimes, while displaying some bits of graphical corruption.

I upgraded my PC to 16GB mainly for this game, I recommend you do the same if you intend to play it.
I was not able to resume multiplayer games with my friends after a crash (nor they were -- yeah, crashes happened on windows as well), which was really annoying. I hope it's more stable now, and that multiplayer games can be resumed.

As an aside, the replay feature in P.A is top notch. I wish more games allowed to play as anyone from any point in a recorded game.

View PC info
Naval have some of the strongest units (outside titans)
It's something special being able to lay siege to a opponent who then can't get close to you.

It's risky commiting to naval tech though as on a map with mostly land it's pointless, especially with orbital support. Very handy if you have excess Econ or at a stalemate

Last edited by Naib on 19 August 2019 at 3:48 pm UTC
0 Likes
Purple Library Guy 19 August 2019 at 5:31 pm UTC
There are two main reasons naval is important in the real world. First, there's a lot of water surface, much more than land. Second, you can transport more stuff more cheaply and more flexibly by ship than any other way, and doing so is important (trade and whatnot). So you can use navies to strangle economies.
If Planetary Annihilation doesn't have movement of strategic goods by ship, navies are going to be less important.
0 Likes