'Policy Infinity' FPS renamed to 'Vengeance' with a big update 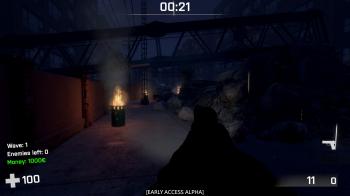 'Vengeance' [Steam] as it's now called, is an indie FPS built with Unity and it just got a huge a update. Featuring a new user interface, new weapons, new maps and more.

The last time I tried it performance was awful even on my 980ti, but it seems to work a lot nicer now.

The interface is better than it was before for sure, but it still feels overly simple and without any real style to it.

Sadly the game is currently pretty dead online, so it's probably worth waiting a while on this one. It does have two single-player modes of survival and zombies, both modes being wave based against the AI, but not currently interesting enough to warrant a purchase in my opinion.

It still feels like a rather hollow shell of a game right now, but now it performs well enough I am more interested in keeping an eye on development. Article taken from GamingOnLinux.com.
Tags: Early Access, Action, FPS, Unity | Apps: Vengeance
0 Likes
We do often include affiliate links to earn us some pennies. We are currently affiliated with GOG and Humble Store. See more here.
About the author - Liam Dawe

View PC info
Most generic name EVER.
1 Likes, Who?

View PC info
Not as bad as Section 8 Prejudice or Storm United
0 Likes
While you're here, please consider supporting GamingOnLinux on: