Postal Redux Coming From RunningWithScissors, And It's Confirmed For Linux With UE4 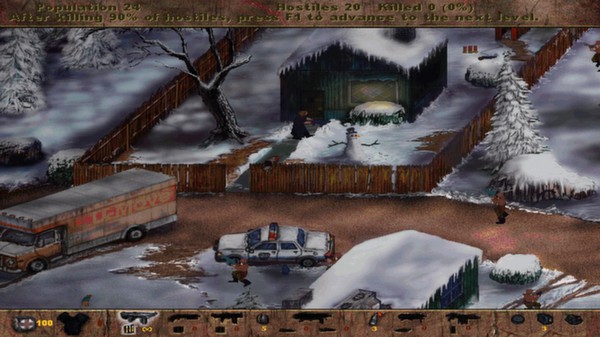 RunningWithScissors is planning to re-do Postal 1 into "Postal Redux", and they confirmed it will be on Linux.

The new Postal Redux will use Unreal Engine 4, so it's not surprising Linux is a platform. They have been very supportive of Linux in the past too, so it's great to see them continue this.

The only word on release is "2015" right now. We will keep you posted if we hear anything else on it.


POSTAL: REDUX is confirmed! Faithful to the original with redrawn HD art & redone character models. Many new features such as co-op.

I am a big fan of Postal 1 due to playing it a lot when I was younger, and it was one of the craziest games around. It will be great to see it revamped completely with nicer controls, as the controls have not aged well.

It's great news and all, but Linux is still waiting on all the updates Postal 2 has gained, but RWS did state to us they are working on that themselves now rather than relying on external porter Ryan "Icculus" Gordon.

I imagine our editor Hamish will be pretty happy to hear this, and many of you too! Article taken from GamingOnLinux.com.
Tags: Action, Unreal Engine, Upcoming
0 Likes
Share

I am the owner of GamingOnLinux. After discovering Linux back in the days of Mandrake in 2003, I constantly came back to check on the progress of Linux until Ubuntu appeared on the scene and it helped me to really love it. You can reach me easily by emailing GamingOnLinux directly.
See more from me
Some you may have missed, popular articles from the last month:
The comments on this article are closed.
8 comments
Running_With_Scissors 16 Nov, 2014
The original POSTAL 1 is currently being ported to Android too.

edo 16 Nov, 2014
View PC info
Postal 1 never worked in my case, I killed everyone and then I couldn't access to any map :( Thats was annoying, because I tried several times on linux and windows.
I hope this UE4 port will finally work properly.
0 Likes

Quoting: edoPostal 1 never worked in my case, I killed everyone and then I couldn't access to any map :( Thats was annoying, because I tried several times on linux and windows.

Yet another person bit by the infamous “F1” key design problem:
http://www.gamingonlinux.com/articles/gamingonlinux-reviews-postal-classic-and-uncut.1114

And when it comes to using UE4 for the game, considering the fact that all of the developers at RWS are now familiar with using UnrealScript and have extensive experience with the Unreal tools, not to mention the need for proper cross-platform support, I can see why UE4 would be very attractive for them.
2 Likes, Who?

Quoting: edoPostal 1 never worked in my case, I killed everyone and then I couldn't access to any map :( Thats was annoying, because I tried several times on linux and windows.


Yet another person bit by the infamous “F1” key design problem:
http://www.gamingonlinux.com/articles/gamingonlinux-reviews-postal-classic-and-uncut.1114

Great info, thanks. btw this doesnt have any sense. I guess I will have to play it again.
0 Likes
Running_With_Scissors 17 Nov, 2014
Yeah, using UE4 is more about ease of portability to as many platforms as possible, Linux especially.
2 Likes, Who?
While you're here, please consider supporting GamingOnLinux on: