ProtonDB released another data dump, here's a quick look over some February 2019 info

ProtonDB, the rather nice ratings website where you can go and give your thoughts on games played through Steam Play put out another data dump, here's a look inside. This is following on from our first peek into it last month.

The latest data dump is available here, which shows a total of 32,716 reports although that does include around 30 reports from March too. A very active system, good to see!

Like last time, here's how many reports have been going in overall: 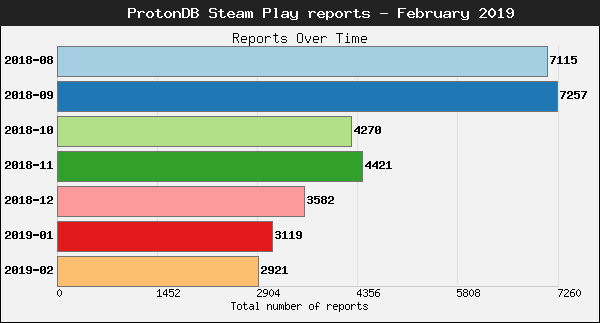 What's especially interesting to see, is that even with a new Proton beta 3.16-7 which was released mid-February we're still seeing less reports coming in overall. However, the drop is nowhere near as drastic as between December and January.

As seen there, February had 2,921 total reports and here's a breakdown of what ratings we saw coming in:

Onto the games that people have been reporting recently, here's what ended up with the most submitted ratings: 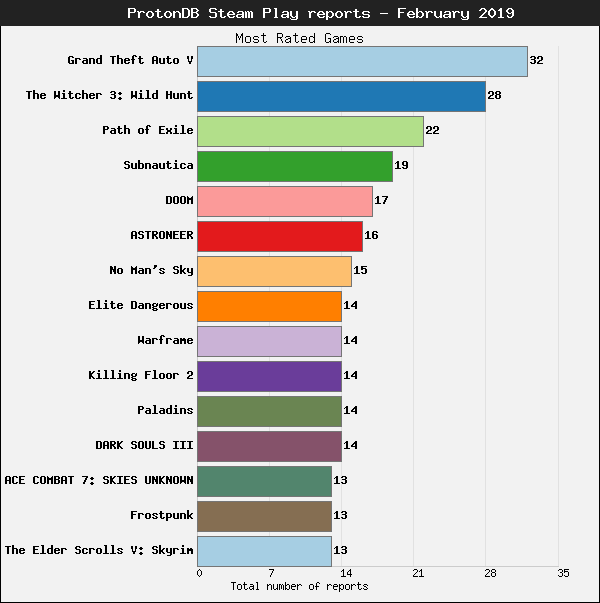 For the second month running both Grand Theft Auto V and The Witcher 3 take the top two spots for the most reports which isn't surprising considering how popular they are amongst gamers overall.

Sticking with actual games for a moment, here's something we didn't look at last month. A peek into what games were getting the most Platinum reports. As in, titles that should be "click and play" without needing anything done: 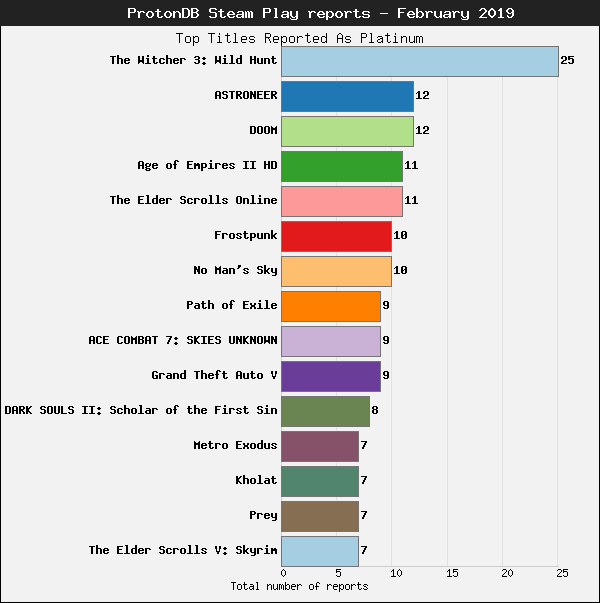 The interesting one there is of course Metro Exodus, practically all of the reports on it give it a Platinum rating. Crazy really, another massive AAA game working from day-1 on Linux thanks to Steam Play. When we see things like this, it really does help to show that Linux gaming really can be awesome.

Onto operating systems, here's a look at the different Linux distributions being used: 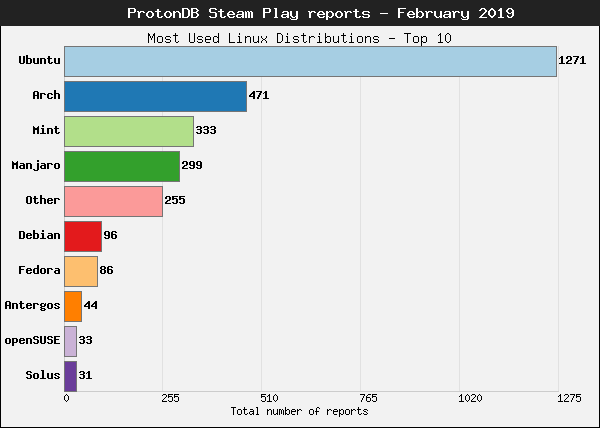 A note about "Other": lots of the reports don't include a specific distribution name. Where we're unable to properly identify them, we bundle them together. This can be caused by multiple things, so hopefully in future ProtonDB can make this clearer in their data dumps.

As for what GPU vendor is most popular, no guessing needed here as it continues to be ridiculously clear:

And again the same with the CPU vendor:

Through these reports, it seems most people have been sticking to Proton 3.16-6 with it having 1,086 submissions and the newer Proton 3.16-7 beta close behind at 958 reports.

It's interesting to see that a lot of it lines up reasonably well with our own user-given statistics, which you can find here. Looking at our own stats, from 550 people only 35 have said they won't be using Steam Play.

Hopefully some of you find this little peek interesting.

I am the owner of GamingOnLinux. After discovering Linux back in the days of Mandrake in 2003, I constantly came back to check on the progress of Linux until Ubuntu appeared on the scene and it helped me to really love it. You can reach me easily by emailing GamingOnLinux directly.
See more from me
Some you may have missed, popular articles from the last month:
The comments on this article are closed.
26 comments
Page: 1/3»
Zlopez 4 Mar, 2019

I'm using flatpak version of Steam and I think it's listing distribution as Unknown. So my reports will be probably in Other category.
0 Likes

View PC info
I' ve reported the games i tried, but now i don't have any more game i want to try on Proton, so i don't report anything. I mainly have native Linux games, and overtime, my library went from "Windows only" to "Some Linux" when i was dual booting, to "99% Linux only" since a stopped dual booting about 5 years ago.

Maybe it's the same for many others ? That's a part of why the reports are going down over time.
3 Likes, Who?

View PC info
I've been bad at reporting, should step up. I play lots of games using proton!
5 Likes, Who?
Thormack 4 Mar, 2019

They really need to fix Elite Dangerous installation on the standard Proton version.


A shame that a game with such a high demand still depends on a third party Proton version to be playable.
0 Likes
Mal 4 Mar, 2019

Quoting: TcheyI' ve reported the games i tried, but now i don't have any more game i want to try on Proton, so i don't report anything. I mainly have native Linux games, and overtime, my library went from "Windows only" to "Some Linux" when i was dual booting, to "99% Linux only" since a stopped dual booting about 5 years ago.

Maybe it's the same for many others ? That's a part of why the reports are going down over time.

Like you, all my windows games are older than Steam for linux.
0 Likes

View PC info
That's interesting that Age of Empires II is getting so many platinum ratings. When I tried it, I needed to rename a launcher file (which would make it gold, since it runs fine after that tweak). And I only learned about that from a number of gold ratings mentioning having to do the same thing.

I guess if it's really working out-of-the-box like that for so many people that's a good thing!
0 Likes
Zlopez 4 Mar, 2019

Quoting: TcheyI' ve reported the games i tried, but now i don't have any more game i want to try on Proton, so i don't report anything. I mainly have native Linux games, and overtime, my library went from "Windows only" to "Some Linux" when i was dual booting, to "99% Linux only" since a stopped dual booting about 5 years ago.

Maybe it's the same for many others ? That's a part of why the reports are going down over time.

I create report for every game I'm testing each time a new Proton version come out. So this adds a few new reports each time a new version of Proton is released.
6 Likes, Who?

View PC info
I've added reports to existing reports. I've also purchased a few (very cheap, and on sale) Windows games specifically to make reports because they didn't yet have any. Something I would encourage others to consider doing, too.

I think one of the secrets to Protondb's success is the ease of creating a report. No registration, no membership, just report. Though I do think I'll register so that I can do as Zlopez said, and regularly update my entries with each new iteration of Steam Play.

Try saying that on the Arch forums. :D
5 Likes, Who?
1/3»
While you're here, please consider supporting GamingOnLinux on: