Regular Human Basketball [Official Site] is a multiplayer game about shooting hoops, only you're inside a great big machine and it looks hilarious. 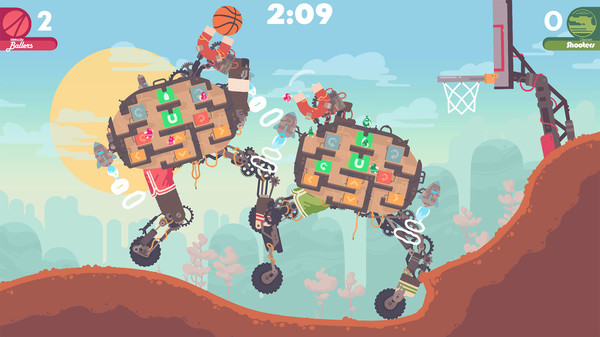 It's a revamped version of a game originally released for free back in 2015, although the original game was only made in a few weeks so it didn't have a lot of polish and it didn't feature online play. You can still try it out on itch.io, but this newer iteration should be much improved in all areas.

You will be able to play 1on1 or in teams, locally and online in this new version. What sounds amusing, is that you can get out of your mech and run into a mech on the opposing team to screw with them.

Their description gives a good laugh too:

Physics in video games are always perfect, and this is no exception. Yelling, confusion and flipping upside-down will be things of the past, as you guide your human to the perfect dunk with pinpoint precision. No flailing, flopping and falling out only to be accidentally squished by your well-meaning buddy here!

Michael Jordan once called basketball "The Sport of Kings". That was shortly before someone accidentally turned off his magnet mid-dunk and he crashed to the floor upside down with legs flailing and boosters rotating the wrong way. Poor Michael, he sustained serious chassis damage.

It releases on August 1st with same-day Linux support on Steam.

Thanks for the tip NuSuey/TuxDB.

View PC info
Looks like Love in a Dangerous Spacetime, only more frustrating... I'm sure it'll be a blast with a few mates, but as a single-player experience, probably rage-inducing!
0 Likes

View PC info
Another fine gaming that I play often getting coverage! Dope!
0 Likes
While you're here, please consider supporting GamingOnLinux on: