Remember the SMACH Z handheld? It's apparently going to be at E3 this year

SMACH Z [Official Site], the gaming handheld that will give you the option of running either Linux or Windows (Windows costs extra) is heading to E3 this year. Hopefully they will have a few fully-working and complete units to show.

Details right now are quite light, as they haven't sent any special press info out that I am aware of. Their own newsroom on their website hasn't been updated since September last year and their Twitter is also rather quiet. However, they did slip out this video below today: 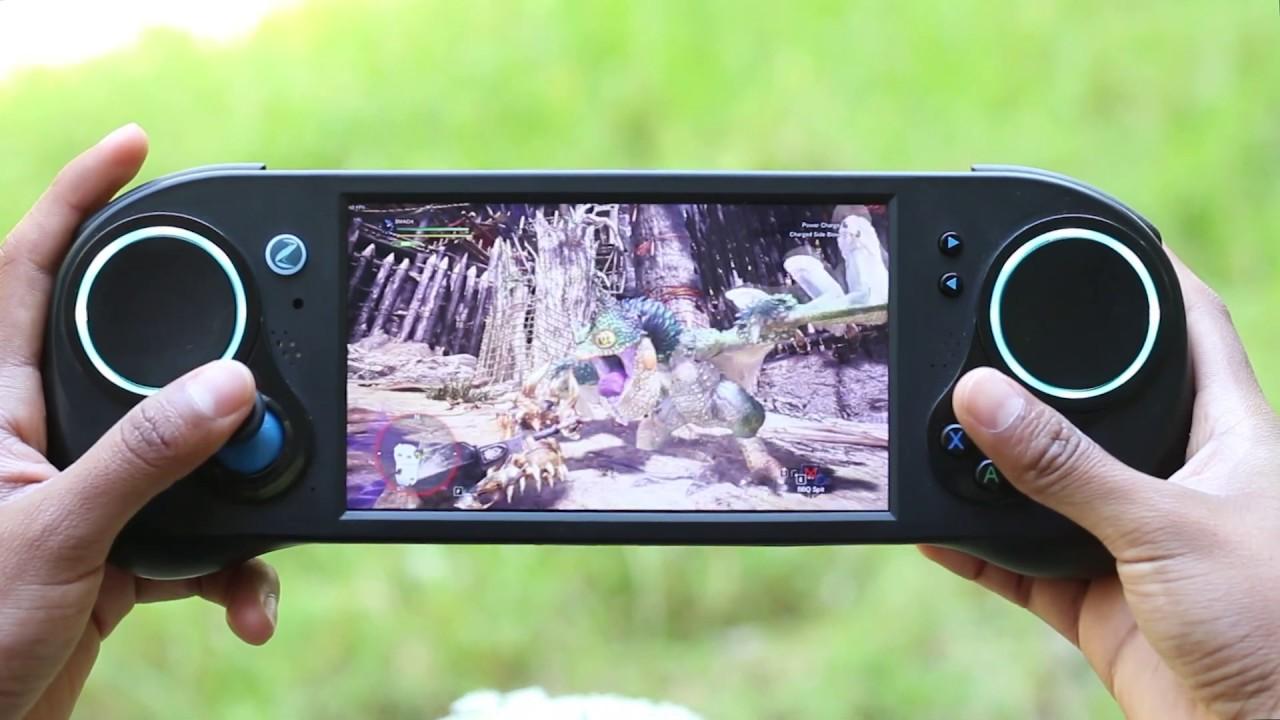 I genuinely hope this is a properly real device that's actually going to work out, as it could help push a few more to make comparable devices. Imagine a small revolution of gaming handhelds that let you just boot up whatever you have on Steam—that idea is why I want SMACH Z to actually succeed.

Quite expensive though, the top-end model costs more (without the current pre-order discount) than the full Valve Index kit and I know which one I would prefer…

Article taken from GamingOnLinux.com.
Tags: Hardware
16 Likes, Who?
We do often include affiliate links to earn us some pennies. We are currently affiliated with GOG, Humble Store and Paradox Interactive. See more here.
About the author - Liam Dawe

I am the owner of GamingOnLinux. After discovering Linux back in the days of Mandrake in 2003, I constantly came back to check on the progress of Linux until Ubuntu appeared on the scene and it helped me to really love it. You can reach me easily by emailing GamingOnLinux directly.
See more from me
Some you may have missed, popular articles from the last month:
The comments on this article are closed.
43 comments
Page: «3/5»

Quoting: EikeYeah, I understand, not in the bus, but still... IMHO, it's way too much money to play what you can play elsewhere as well. While many people say Zelda alone is worth the price of the Switch.

I don't think Smach Z will be the hit some people are hoping for. It's too expensive and as many of you hint at, the selling point is hard to get.

Personally, when smartphones became a thing, I was hoping for mini-computers. Instead what we got was severely limited, by comparison. Smach Z (and others) are a step in the right direction, IMHO
1 Likes, Who?
Klaus 5 Jun, 2019
View PC info

yeah that's kinda what I was thinking, I mean you could get a switch for cheaper, aren't Nintendo allowing steam streaming on the switch soon via app?

Remember when Apple rejected the SteamLink app at first? Nintendo is presumably cross-financing the hardware with software sales, so they have even more reason to reject streaming support, unless it requires a pricey subscription.

I'd love it though. I'm currently holding out o buying new games, that are available on Switch, because I plan to buy one eventually and prefer playing in bed. A streaming feature would make it "instant buy" as it would allow me to bridge to playing games from my backlog and PC-only games (assuming controller support), or games where modding is important part of the experience.

Now, if only Nintendo truely arrived in the 21st century, by making cloud-saves a default feature for all games... I'd easily rebuy some games that sit unfinished on my PC to play them in bed or in the garden, but not if the save-games are tied to the hardware with no way to back them up.

Better yet, allow importing PC save-games to the Switch version of games, where technically possible. Sadly, it seems that Nintendo is concerned about such a feature being an attack vector for jailbreaks and playing illicit copies of games.
0 Likes
Klaus 5 Jun, 2019
View PC info

Quoting: UltraAltesBrotWhy purchase an expensive new device when you already have a smartphone or tablet?

Say this to Nintendo.

The switch is pretty cheap actually at 300-330€, and comes with access to traditionally developed "full" games, rather than an ecosystem dominated by F2P games. While there are plenty of good F2P games, they are usually designed to be played in short sessions over a long time, as opposed to traditional single-player games, where "one hour" is a short session, and a sense of "finishing" the game is usually part of the design. As a consequence, the Switch targets a market orthogonal to typical mobile gaming.

Additionally it is backed by an established company, and games will be optimized for it – notabily including UI adjustments to support the small internal screen, presumably. Lacking this support, games that will run well on a Switch will likely fall behind quickly on the much more expensive SMACH. Never mind the implications of the Startup-character of the company in terms of trust (repairs, replacement, future models, ...).

It also will have to fight with the battery-life and performance implications of running a full desktop OS with traditional pre-mobile multitasking.

…which are overpriced as hell, especially indie games, and you have to re-buy them even if you've got them on Steam or elsewhere.


Quoting: KlausLacking this support, games that will run well on a Switch will likely fall behind quickly on the much more expensive SMACH.

Or they will not. Anyway, Smach is a computer, so you'll be able to tweak games to get better performance.
But do games run well on Switch? I've seen on Youtube how games look and perform there, and it's horrible. Ugly graphics, low resolution and bad framerate for your 60€. MK11 looks worse than the mobile version of MK.


Quoting: KlausIt also will have to fight with the battery-life and performance implications of running a full desktop OS with traditional pre-mobile multitasking.

But if that OS is Linux…

…which are overpriced as hell, especially indie games, and you have to re-buy them even if you've got them on Steam or elsewhere.

Matter of priorities really. For me "playing it comfortably" easily trumps "has a 75% steam discount", especially since I hardly even have the time to play through games quickly enough for the price difference to have a relevant effect on my budget. All those discounts have given me... is a large backlog.

Though I'll gladly admit, that I'd prefer locally streaming my already-owned games over rebuying, if it exceeds the 20€ mark.

Quoting: KlausLacking this support, games that will run well on a Switch will likely fall behind quickly on the much more expensive SMACH.

Or they will not. Anyway, Smach is a computer, so you'll be able to tweak games to get better performance.

I'd rather pay more than have to spend time tweaking performance... Matter of subjective priorities again.

Quoting: KlausIt also will have to fight with the battery-life and performance implications of running a full desktop OS with traditional pre-mobile multitasking.

But if that OS is Linux…

It's not really a Windows-specific issue though, but rather in the difference between dedicated mobile and desktop operating systems, and how it affects how their third-party software is written.
0 Likes

View PC info
The idea is great, the price is too high and the timing is almost perfect.

Idea: For a long time PC users have wanted to play like console users. On the go, too. Without having to worry about internet connection quality in many cases, like for streaming.

Price: Autracious. If they really want to gain some traction with the device at least a reduction of £200 must happen. It is true that technologically is supposed to be better than Switch, which partly is also being fund with software sales. Arguably, Smach Z has the same value of a laptop with similar characteristics plus the benefits of the handheld mode but I don't see many potential customers with that comparison in mind.

Timing: There are several technologies, companies and services out there to have PC games played on the go. From normal laptops to Stadia, with phone ports and streaming in the middle of it. However, all of them are at the base different from what Smach Z offers. Normal laptops are too big and require a controller, phone streaming require a very good connection -aside of lag I also experienced problems with control recognition and issues with GOG games on SteamLink- and Stadia is new, with many questions still to be solved; Price and ownership being the biggest doubts. So, as gaming handheld PC, and with ALL your library already available once purchased, is the only device out there. Perhaps the GPD could be consider its competitor though the latter is still more focused as handheld laptop rather than a gaming PC. On the other hand, the development has been troublesome, with many accusations of fraud and there were several delays too, which probably made the idea lose momentum.

With those points above, I still think the price is the most important here. Ideas and timing are important but the wrong price tag can bring the former down forever, losing the opportunity.

Personally, I hope the device turns to be exceptional and successful enough to bring price down a bit or, at least, create interest in other companies to see more competition. I'd like the thought of owning one, to be honest.
0 Likes

The market for small dedicated handheld gaming devices. That market died right after the PSP.

20 million of Nintendo Switch owners don't agree with that statement.
2 Likes, Who?

20 million of Nintendo Switch owners don't agree with that statement.

Well, there are some people not using Switch outside their homes...
0 Likes

View PC info
Interesting device, for my taste way too pricey. For a while I was thinking about GDWin (or how it was called), but IIRC it didn't have official Linux support, so I stopped following it. I am saving for Index currently and since I don't go out much, Index will have much better value for me.

Quoting: Arehandoro...Switch, which partly is also being fund with software sales

I don't believe this is true:

QuoteNintendo CEO says company won't make loss by selling it; but also listening to what consumers expect from us when setting price.

I am also pretty sure they said that even with some planned discount (Christmas?) they still won't be losing money on the device.
0 Likes
« 1«3/5»
While you're here, please consider supporting GamingOnLinux on: