RUINER is reconfirmed for Linux once again

After the stupidly confusing mixed messages about the Linux version of RUINER [Steam, Official Site], the developer has now reconfirmed that its coming to Linux. 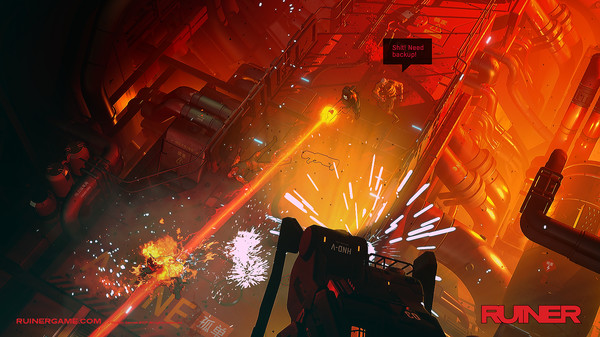 Your involvement in RUINER community is awesome and heart warming.
The reason why Linux was removed from the store page is that it will be coming a little bit later.

We originally planned to launch RUINER for PC, Mac and Linux at same time, but we faced some technical challenges in the later stage of the development and porting the game to consoles.

As soon as we launch the PC, PS4 and X1 versions, we’ll focus on the remaining platforms. You can expect an update in a couple of weeks.

We’re sorry if we caused confusion with the mixed messages.

To sweeten the waiting time a little, we can reveal that there will be a small surprise coming together with the RUINER Linux version.

It’s really good to get confirmation again, but it does go to show their communication has been a bit pants. It was delayed, then their Twitter team said they had no plans for it, then they asked for posts in support of a Linux version and now it's confirmed again.

I'm excited to try it, but I'm not really amused by the situation here. We've been spun in circles, but hopefully they won't let us down now.

View PC info
The trust is gone. But i suppose i'll be getting it after the launch since they didn't actually abandon us altogether...
1 Likes, Who?

View PC info
Okay, good. My gaming money for the immediate future has already been spent on SteamWorld Dig 2, but I'll take a look at this whenever it comes out.
0 Likes

View PC info
Good news. I however will only buy once it is actually available for linux ... no "preorder" to provide cash upfront. A delay for linux is something that can be accepted. I wonder if it was internal miscommunication or it is a convenient statement to cover an actual change (release, not release, release...) either way I look forward to playing this.

I am intrigued by the small surprise for linux & this sort of thing would be great if it was standard for linux. Not some cheesy penguin (like TF2), not something game-changing (annoying preorders bonuses that give people actual in-game advantages) but some visual that gives people a reason to prefer linux over windows: Vulkan could help, additional visual etc...
5 Likes, Who?

View PC info
Yeah, poor communication, really frustrating. That said, if they stick a steamOS logo on this, I'm definitely buying it! :)
0 Likes

View PC info
As long as they don't pull a "Stainless" out of their bottoms.

What ever happened to Carmageddon?
1 Likes, Who?

View PC info
Sounds like the same shit Devolver did with Shadow Warrior 2. "Linux version is totally coming guys, please pre-order!" and then nothing.
2 Likes, Who?

QuoteTo sweeten the waiting time a little, we can reveal that there will be a small surprise coming together with the RUINER Linux version.

putting steamOS icon on steam page of the game ?
still communicating is better than totaly abandoning us. But you have to earn trust...

now i like to say could you do me a favor if you will be publish ruiner for linux faster than observer game could you put +1 ;
lets tell me who will win my wallet next "ruiner" or "observer" ?
0 Likes

View PC info
I'm glad they are now committed, but the whole poll situation was really confusing.
0 Likes
backplate101 29 Sep, 2017
well screw that then. I dont see the bloody point of waiting. Dare I ask, anyone tried to if this game runs in wine?
0 Likes
theripper 8 Oct, 2017
tested it works with wine
0 Likes
1/2»
While you're here, please consider supporting GamingOnLinux on: