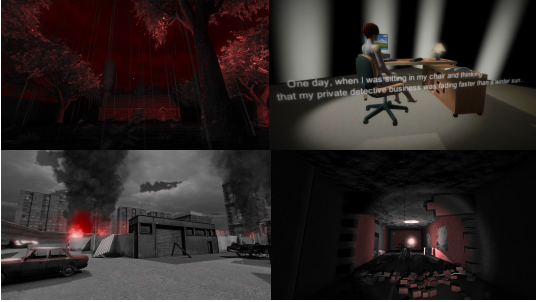 Sacred Line is a free short dark adventure/surreal thriller with story-driven explorative physics-based gameplay, black-white-red silent movie/BD style and multistructural abstract non-cliche plot. It takes its place in a fully developed universe where your main enemy is a union of third-world countries which is trying to set totalitarian regime over the whole planet polluting and destroying everything around them. In this game you will face their leader which was summoned by the ancient sect, dealing with unknown sources of power and paranormal activity.

You are playing Ellen, a private detective, who is trying to survive in Eastern Europe. Lately detective business, which she inherited from her missing sister Sarah, almost ceased its existence and one day before she was going to close her office she got an anonymous call. The unknown asked her to find some hidden forest outpost and told her about its position. That was just the beginning.

The game supports only 16:9 monitors and minimal resolution 1280x720.
Almost every object in game is physically interactive. You can drag'n'drop things using Left Mouse Button, glass and walls are breakable.

Some you may have missed, popular articles from the last month:
The comments on this article are closed.
9 comments
Sabun 28 Feb, 2013
I tried playing this in Ubuntu 12.10 64Bit, but both the 32bit and 64bit versions of the game don't run.

It says it fails to load Mono. I checked in the USC, and it says I have Mono runtime installed. What should I do to get up and running with this game? I downloaded it from the Mega link on the website.
0 Likes

View PC info
Same problem here. It complains about not being able to find the Mono library on the something-something-Data/Mono directory, even though there's a mono.dll file there.
0 Likes
sashadarko 1 Mar, 2013
Thanks for feedback about this problem, posted a question about this on Unity forums. If there's any solution I'll post it here and on IndieDB page.
0 Likes
sashadarko 12 Mar, 2013
Just got news from Linux user that 32Bit version works and completable.
A little tip from engine developer (another game but similar problem): "Setting the player's permissions to allow execution (either from a graphical file manager, or by chmod 755 myPlayer at the command line) should fix this."
0 Likes

Sabun 13 Mar, 2013
View PC info
I tried it once more, even redownloaded it just to make sure. It still returns the same mono error.
Could it be that when you Built it for the Linux build, that the build got corrupted? It has happened to me before when I used Unity for a mini-project.

I tried both the 32bit and 64Bit executables, and made sure chmod 775 was done (in GUI it's just ticking "Allow executing file as program". This is on Ubuntu 12.10 64Bit with an Nvidia GTX 680 using the 304 drivers, so it's not a hardware issue just to be sure. Would you mind rebuilding the game once more and reuploading it to Mega?
0 Likes

Sabun 13 Mar, 2013
View PC info
I discovered what the problem is sashadarko. Your data folder is missing the x86 folder inside Mono directory.

I downloaded Slenderman's Shadow demo, and searched their Data folder to see what was different. After copying their x86 folder into Sacred Line's Mono folder, the game starts up no problem. This is definitely because the linux build process screwed up (or your Unity installation is semi-corrupted, meaning you need to reinstall Unity).

Inside the x86 folder is just one file, libmono.so

I uploaded the x86 folder in Mediafire if you want to test it yourself or paste it into your data folder:
http://www.mediafire.com/?uct82mqixqzq6dm
0 Likes
sashadarko 13 Mar, 2013
Thank you very much and actually you right about corrupted build. Yesterday I tried to make a test build and engine exported very corrupted one which crashes with known error (and the only known fix about it is to reinstall unity, yes).Though it doesn't explain why another user who reported about sucessful launch didn't encountered this.
0 Likes
sashadarko 13 Mar, 2013
deleted
0 Likes
sashadarko 14 Mar, 2013
The same version but not with just x86, it also has 64bit library (taken from One Late Night):Direct download
0 Likes
While you're here, please consider supporting GamingOnLinux on: