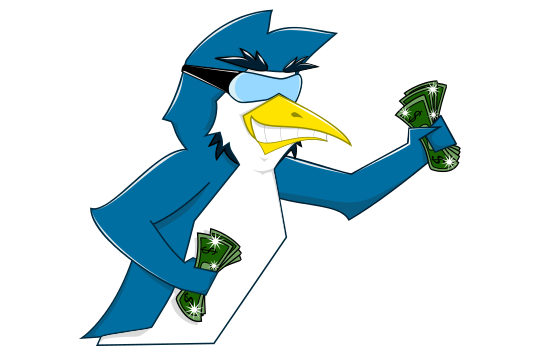 Here we are again! I know how much people enjoy statistics (snore!), but when it comes to Linux and how well games perform on it we all need to see.

You can see parts 1 and parts 2 on those links.

First of all thank you to all developers who replied to me on it, as developers lead very busy lives taking time out to email us takes time away from developing, paperwork and their personal lives.

So, without more rambling from me here we go!

FLASHOUT 2
16.1% of Steam sales are Linux since release, and a comment their CEO:

Michal Stepien, CEO Jujubee Games StudioWe are big fans of Linux here at Jujubee especially due to the freedom that Linux users can enjoy. From the very beginning we wanted to support this platform and we are very pleased that so many Linux users made the decision to give FLASHOUT 2 a go. I can reveal that we have plans to release even more games for Linux and our next project, the story-driven turn-based RPG title Spellcrafter, that greenlit just a few days ago, is a great example because it will be running on Linux as well. Thank you all for your support and we hope you'll like the game as much as we enjoy creating it!

The Fall
Linux sales represent 4.5% of their gross revenue on Steam, and 4.2% of all activations, which includes Humble Steam key sales and activations from Kickstarter.

The developer had this to say about Linux support:

John WarnerIt's incredibly difficult to discern weather or not it's worthwhile to support Linux, but I'm certainly glad that I did, for lots of reasons, not the least of which was just to get an idea for what my numbers would be. Along the way, I've found that the Linux community is filled with great people and have made at least one great friend in the process. I also think that it's a growing platform, and being aware of it now and getting a sense for Linux development is a very good thing I think... so, long story short - I'm glad I did it. However, there are other issues as well. There have been a number of Linux users who have had some very unusual bugs. I am working to support these folks and fix their issues (I'm incredibly thankful for them for buying the game), but at the same time, there's a part of me that would rather trade the 4.5% I generated to simply not have any of the issues. There's something silly about spending time to fix issues that a small percentage of people are experiencing when I could be spending my time focusing on larger platforms with more standardization (read: consoles)... but like I said above, I'd also be trading my new friendships and useful data along the way, so I'm glad I'm in this situation.

Rust
The awesome guys at FacePunch made me a fancy graph for this one and then tweeted it out after my request, so by the time this is published it's probably older news if other sites pick it up. 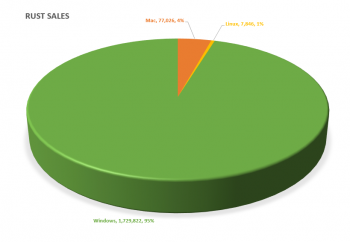 So, since we covered Rust in our last two articles it was 0.4% January, 0.55% February and now 1% July, so it is steadily going up, but sadly still nothing even close to Mac. We will contact the Rust guys again around the end of the year to see if it has gone up any further.
When we asked them what they thought about the numbers they said this:

@gamingonlinux Kind of exactly what we expect. Supporting osx/linux isn't for the money, it's just the right thing to do.

Can't argue with that, and anyone who does it like that deserves our respect for helping our platform grow.

Spy Chameleon
8.7% of the Spy Chameleon sales have been from Linux. The developers also had this to say:

QuoteWe wanted to release the game in Linux because for us is important that Spy Chameleon - RGB Agent is available for every computer and Steam user. We chose Unity as our engine because, among other reasons, it makes easier to make builds for every platform.

The developers mentioned this about how they feel about Linux:

QuoteThere is a lot of potential in Linux for home users. High internet security and a lot of open source software.
We think the game industry will start to porting on Linux more games in the future.

@gamingonlinux Looks pretty close to my own stats from Quest of Dungeons. But Linux was released 2 months after pic.twitter.com/UvO2MAU1OA

Added this one after this article went live

Far Sky
0.89% Linux. I was actually surprised at how low that is for such a good looking and well reviewed game!

The developer noted this about how they feel:

QuoteIt is of course way lower than Windows and Mac, but it is an important platform since the Linux community is really present over the Internet. I used Linux everyday for almost two years for work, it just felt right for me to port the game on it. One of the reasons why I made the game in Java is for the platform portability. Making a Linux build is pretty easy.

Again, thank you to all developers involved.

So, hopefully this gives a reasonable idea of how good/bad the Linux gaming scene is right now for developers. It's always interesting to see what developers think about supporting Linux given that we don't yet have that big a marketshare.

Article taken from GamingOnLinux.com.
Tags: Editorial
1 Likes, Who?
We do often include affiliate links to earn us some pennies. We are currently affiliated with GOG, Humble Store and Paradox Interactive. See more here.
About the author - Liam Dawe

.. what a funny game (and the first racing game I could buy .. or sort of racing)! Reminds me on old gaming machines

. I enjoy it a lot and if there was any use for it, I'd buy it 3 more times!
I also like Spy Chameleon pretty well.

Didn't buy the others. Maybe there is a pattern to what linux gamers buy ;).

Rust seems very interesting, had my finger above the buy button a few times. Though, I never liked survival games and have a huge backlog on games...

Anyway, I'll have to get a controller soon, I wanted to wait for the Steam one, but I'll probably get one for the time to it.
0 Likes

View PC info
I'm really surprised that The Fall is so low. It's absolutely superb and wasn't it recommended by Cheese in one of the articles here? Loved that game and bought/played it due to that recommendation.

I'm a bit surprised by Far Sky too, but something about the underwater environment puts me off. It gets good reviews, but I'm just not a fan of the underwater idea.
0 Likes

Also reminded me I really need Rust, Far Sky and Flashout 2. I had lots of fun on wipeout, so will be a good trip down memory lane.
0 Likes

Segata Sanshiro 28 July 2014 at 6:57 pm UTC
View PC info
Been putting off getting Rust for a while, but will get it now after reading this.
0 Likes

View PC info
I've been boycotting Rust... for some reason. Can't remember exactly, so probably not a great boycott really. Was it one of the devs being arrogant?


Ah right - I've just googled it and it was comments that Facepunch's Garry Newman (of Garry's Mod fame) made about Linux. Lots of comments, mostly whine-noise about low sales of Garry's Mod on Linux... as if it hadn't been out for 7 years before being released on that platform. 7 years. Does Newman think Linux users just spring into existence? Or perhaps we migrate from other platforms and thanks to steamplay, already have hundreds of previous purchases from there. Unbelievable.

I would love to support Facepunch, as at least someone in that company appears to "get it", given that comment above, but honestly, I can't bring myself to give this guy my money. Thanks to his ill mannered comments, I actually now regret owning his game from when I was Windows.

And the worst part of that is, I only bought it for one, single LAN-party when there was a bit of peer pressure to buy it for this one mod everyone was wanting to play. Can't even remember its name.
0 Likes

But I have so many games to play... I am going to wit a bit.
Rust... I was interested in this one, but this is yet another survival game. Moreover... There's a plane in one of the trailers I saw, and guns. I don't know why. What always interested me in, let's say Minecraft, was the ability to create a private server to play with our friends, or on your LAN. I think this is not possible with rust.

scaineAnd the worst part of that is, I only bought it for one, single LAN-party when there was a bit of peer pressure to buy it for this one mod everyone was wanting to play. Can't even remember its name.

About Garry's Mod mods :
I have recently played several games of propHunt, which is very fun if you can communicate with your partners (Mumble, LAN...)
But I wouldn't imagine playing Gmod without Wiremod... I guess that's just the engineer in me that has a lot of fun with it

Then, there is Spacebuild. I never really played this one because I find the maps way too small (limitation of the source engine), but the concept is interesting.
0 Likes

tmtvlYeah, that's my only problem with Linux: there's pretty much no good games available. But there's always Wine, which works well enough.

If you really think that so you must open your mind and start to see beyond the Call of Duties and Battlefields.
1 Likes, Who?

tmtvlYeah, that's my only problem with Linux: there's pretty much no good games available. But there's always Wine, which works well enough.

Really? Not even one?