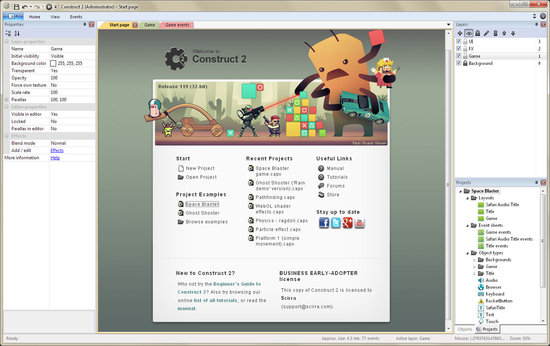 I love the idea of game creation tools that require no programming knowledge, as they enable hobbyists to have fun, quick prototyping and much more. Construct 2 is one of the finest around, and the developers have laid out plans for Construct 3.

I think this is pretty huge news, as lots of games are made with this tool (and others like it from Clickteam called Fusion/Multimedia Fusion), and having the editor on Linux would make me even give it a proper go. I’m too stupid to learn another language (PHP is enough, and I’m bad enough at that!).

Being able to drag and drop events to make things work, have graphics on the screen for me to move around, and other simple things really do make it a powerful tool for simpler people like me to have fun, and maybe even make a great game out of it.

You can see a cheesy video of a very simplistic game being made in this video:
https://www.youtube.com/watch?v=5RlSmkSbleI
It’s obviously a very simple quick look at the tool, but the tool itself is actually quite powerful and easy to use. I cannot understate how useful tools like this are, and apart from GDevelop (which in my personal opinion is nothing close to being as good) we don’t have anything like it.

QuoteConstruct Classic was released in October 2007. Construct 2 followed in February 2011. Now we're coming up to four years and 200 releases later, we feel it is now time to consider the next step for Construct.

We frequently get requests for significant features which are very difficult to achieve with our current editor. These include:

Support for Mac and Linux
Translation to languages other than English
Third-party extensibility of the editor (an editor plugin SDK)
Project modularity features (such as designing new kinds of plugins purely in events, or ways to usefully share functions or groups of events)
Other editor-focused features (e.g. array contents editor, refactoring tools)

We feel Construct 2 is mature software and successfully achieves its goal of being an easy-to-use game editor. However we need to address the above requests eventually, and to do this it is necessary to build a whole new editor. This will be Construct 3.

That’s a small section of their blog post, and there’s more to it. It won’t exactly be here tomorrow, but we have something really awesome to look forward to, and I really hope it works out well for them.

I've actually followed them for a long time, and was probably the first person to ever ask them for a Linux port of the editor, but back then it wasn't even remotely on their radar, we are talking years.

Getting tools like this, to me, really means Linux is getting somewhere good.

They really will have a customer in me when they do it. Article taken from GamingOnLinux.com.
Tags: Editorial, Toolkit
0 Likes
Share

View PC info
Stencyl already runs on Linux and lets you visually script your game. There has been a lot of talk in the Godot IRC about visual scripting as well, so I am confident we will see that in the future, though it's not officially on the roadmap yet. Personally, I understand the desire for this kind of thing, but it's really not for me.
0 Likes

View PC info
This is great news, I used Construct 2 while on windows - It'll be nice to revisit it as I'm now Linux dependent.
0 Likes

View PC info
It's awesome seeing more and more engines getting native Linux editors. I'm not very familiar with Construct 2, but I know it's what Chosmochoria and the crowd-funded The Slaughter uses.
0 Likes
While you're here, please consider supporting GamingOnLinux on: