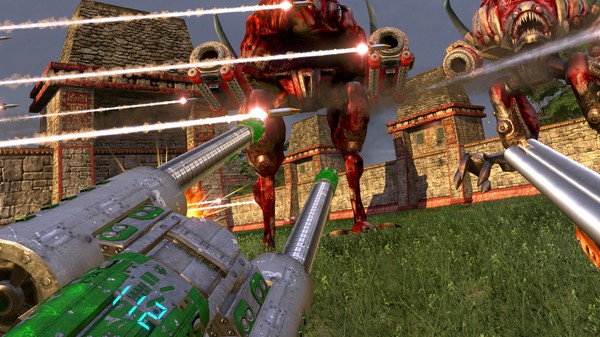 They both require a VR headset, but you're able to play with keyboard and mouse if the motion controllers aren't your thing.

I won't be giving either game any thoughts, as the HTC Vive is far out reach for me financially and neither Valve or HTC are able to provide GOL with a unit to test with. Valve specifically said they were unable to and HTC haven't replied to any requests about it. I will, one day, grab a VR headset when they come down in price. Article taken from GamingOnLinux.com.
Tags: Action, FPS, Steam, Virtual Reality
2 Likes
Share

View PC info
So I'm curious about something. Debian Stretch is now in Hard Freeze. SteamVR I think still requires the beta nvidia drivers.. anyone here in the know if we could potentially get newer nVidia drivers in Debian Stretch that support SteamVR, or will we end up getting backports, or needing to steal packages from SteamOS?

Either way, I've played a bit of the first encounter on Linux, and the level I'm on (the Dunes?) is hard as hell!! I think we should get some of us together and play it multiplayer?
0 Likes

View PC info
Yeah, there is also a version of Second Encounter without VR now available. Hangs for me with Vulkan but works nicely with OpenGL.
0 Likes

bubexel 4 Apr, 2017
View PC info
Any idea in VR how to change the audio from internal to VR Headeset sound? it ignores me when i click on it on pavucontrol.. so fustrating play it without sound :(
0 Likes

Quoting: GuestFlat The Second Encounter is out too. With DLC.

Thank goodness for that. My heart broke when I realized that the title was VR only. I'll have to give it another look-see and wishlist it.
0 Likes

View PC info
It would be great if one of you Vive-owners could give us a little report on the status on Linux as of now, both in regards to these games and the VR experience in general.
Is it matured enough for the rest of us to follow?
0 Likes

View PC info
VR headsets are very pricy by themselves... but on top of they also don't fare very well on their trans-atlantic trip to my home country... Here in Romania they are almost twice as expensive. TWICE! And on top of that we have one of the weakest economies in the EU so close to no one can get them in this country.

If they were just as expensive as they are listed on the producer site, then I'd buy one. But like this... it's just a huge waste of money. I'm perfectly happy spending carts of money to build a gaming PC, and would do it all over again rather than buying just one small accessory that costs like two thirds of it.

I get that they are expensive. It's a new, futuristic thing. But still... Selling it at a reasonable price somewhere and twice that price elsewhere, is unacceptable.
0 Likes

View PC info
Anyone know where the benchmark feature is in Serial Sam 2017/Fusion these days? I can't seem to find it in any of the menus now.
0 Likes

Quoting: BeamboomIt would be great if one of you Vive-owners could give us a little report on the status on Linux as of now, both in regards to these games and the VR experience in general.
Is it matured enough for the rest of us to follow?

I would love to make that little report, but my english is very bad.

Is it matured enough? NO. A big no :D

First you need beta vulkan drivers of nvidia 375.27.15 that dont compile on kernel 4.10. I had to find in forums for a patch.
In first release of steamVR was totally broken. I was unable to pass the room configuration. After some updates i managed to configure everything and make it run. There was a huge latency that keep till today, not huge, but still some. When you move your head or your pads you feel it. It make some sick motion. Tutorial was totally broken also, today it's the first time i managed to run all the tutorial. We have just few games now, mainly serious sam, serious sam 2, dota and destinations. Destinations crash my computer after some seconds of running. Serious sam run with some glitches and crash after some minutes. I didn't test serious sam 2 and dota yet.

About perfomance, with my gtx 970 on serious sam i didnt had 90 fps, with my 1080 now runs smoothly. It means, you need to much power to run soomth anything you can run easy on windows.

Quoting: bubexelI would love to make that little report, but my english is very bad.

Your language is not "very bad" at all! Thanks alot for the status report. I really do appreciate these updates, to stay updated on the progress before I get my own set.
0 Likes
1/2»
While you're here, please consider supporting GamingOnLinux on: