Shadow of Mordor benchmarks old vs new on Linux

By Liam Dawe - 27 January 2017 at 11:26 am UTC | Views: 16,496
Since Feral Interactive noted performance fixes in the recent Shadow of Mordor [Steam, Feral Store] patch I went ahead and test some benchmarks on my testing box for you.

These are in comparison to my original results, run on the same hardware but with a newer NVIDIA driver and the latest Shadow of Mordor patch. I would have compared it directly with the original NVIDIA driver I used, but back then I didn't list it. The old version also isn't available to opt in, so I have to go by the original results (the machine setup is exactly the same, minus driver). This is essentially a dual test of newer drivers + latest patch optimizations.

Of course, these were run multiple times to ensure of their accuracy. The game was also restarted after each setting change to allow things to get properly refreshed. 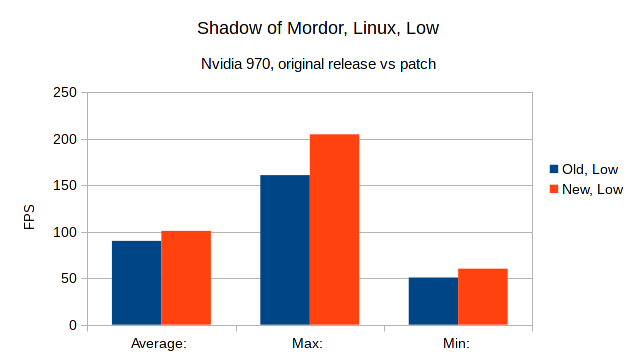 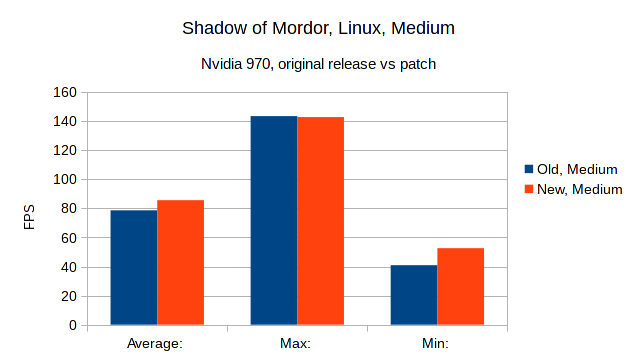 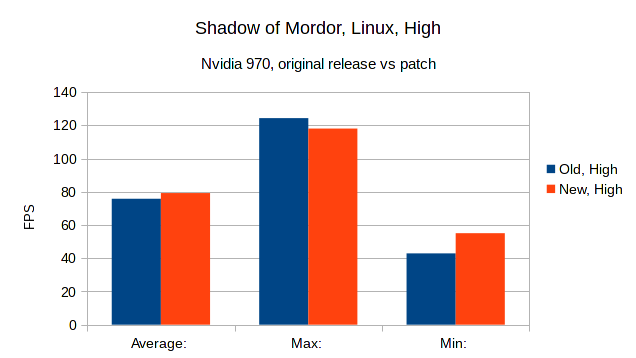 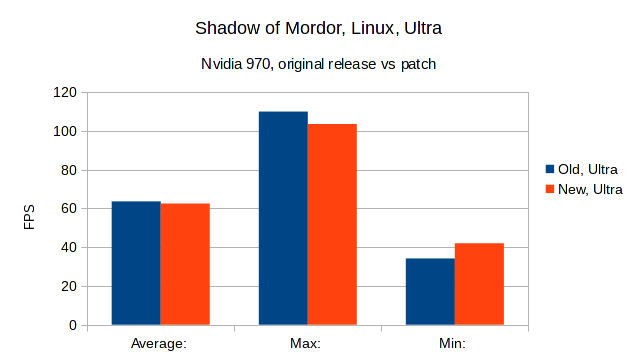 As you can see, it has improved a fair bit. The most important items to me, are the Minimum and Average FPS, which show improvements no matter the setting. The Ultra setting is the odd one out, since my 970 card isn't good enough, as Ultra recommends a 6GB VRAM card which my 970 is not. Minimum FPS not dropping so hard will result in a much smoother game overall.

The reason the improvement isn't as great on the higher settings is due to the optimizations that were done. Previously it would have been CPU-bound which showed especially well at the lower levels, so now a better GPU and CPU will be even more useful than before. Along with driver updates from NVIDIA, Shadow of Mordor on Linux should be a much smoother experience. Article taken from GamingOnLinux.com.
Tags: Benchmark | Apps: Middle-earth: Shadow of Mordor
15 Likes
Share

View PC info
Thanks. Seems like my experience should be a bit smoother should I ever decide to slog through the rest of the game. The minimum and average numbers are indeed the ones that matter.
0 Likes

View PC info
Great to see this game still getting improvements (not just the texture fix) so long after launch. Keep up the good work, Feral.
0 Likes

This is great news. Very nice to see that they still give love to Shadow of Mordor. Feel that it is time to give this title an honest chance now. :D
0 Likes

Pity I didn't wait with playing SoM a few weeks more. I finished it in early January :(
0 Likes

View PC info
How much RAM did you have ? 8Gb or 16Gb ?
0 Likes
Guest 27 Jan, 2017
@Liam i was under the impression the improvements would come in a more CPU limited scenario ? As such a i5-4670K might not see the same gains say as a low end AMD CPU / APU. I need to test this now as i have a crappy CPU that might benefit.
0 Likes

View PC info
Here are my numbers, using this PC:

Did the test setting the graphics quality to "Medium", except for "Texture Quality" set to "Low" because my gfx card has only 1Gb RAM, "Mesh quality" set to "High", "Antialiasing" set to "FXAA + camera", tesselation and dept of field was checked.

Was it playable? YES. Was it enjoyable? NO.

The numbers speaks for themselves: I'll never run this game again under Linux. Anyway, thanks a lot Feral for your dedication, is much appreciated!
1 Likes, Who?

It could be caused by the recent change in the way the Steam client handles the runtime and local libs. I have no idea what they did, but setting STEAM_RUNTIME_PREFER_HOST_LIBRARIES=0 reverts to the old behaviour.
0 Likes
1/2»
While you're here, please consider supporting GamingOnLinux on: