Shadow Of Mordor Could Release For Linux Soon 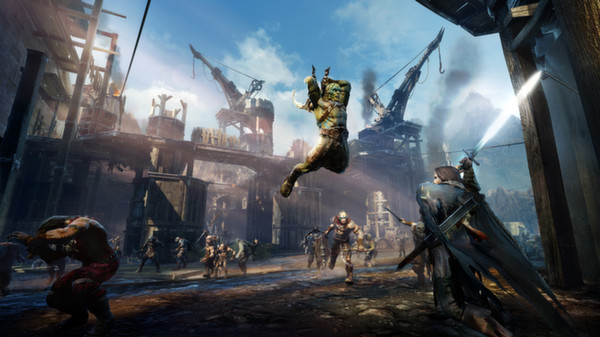 With the news of a Game of the Year edition to come for Shadow of Mordor, it looks like the time is ripe for a Linux release. We already know it’s coming, and it’s started appearing in people’s Steam library too in the last day.

It currently won’t work if you download it, but I have thought ever since the GOTY edition announcement that it would be a perfect Linux release time. Imagine a big splash banner on Steam’s homepage of “New GOTY edition, with SteamOS support!”.

The GOTY edition seems to come with all additional content, so I look forward to playing through the entire game on Linux.

We will find out on May 5th if it happens, otherwise we will keep riding that hype train until we can slay some Uruk. We are incredibly excited for the game here, and we know Feral Interactive won’t let us down on performance.

Originally the press releases stated a “Spring” release, so even if they don’t release the Linux version next week, they still have a while to go before missing the target. My contacts at feral are being silent too, and I take that as a good sign of something coming soon. Article taken from GamingOnLinux.com.
Tags: Action, Steam, Upcoming
0 Likes
We do often include affiliate links to earn us some pennies. We are currently affiliated with GOG, Humble Store and Paradox Interactive. See more here.
About the author - Liam Dawe

Segata Sanshiro 1 May, 2015
View PC info
Yeah, that's a pretty good assumption and it appearing in the library has usually been a sign of it being right round the corner (at least in the next couple of weeks).

View PC info
I'm looking forward to this one. I wasn't so sure on it when it was released but a ton of gamers can't be wrong about it being good right? I had planned to pick it up when a GOTY edition came out, so hopefully the Linux version comes at the same time so I don't have to wait longer.
0 Likes

Quoting: Segata SanshiroYeah, that's a pretty good assumption and it appearing in the library has usually been a sign of it being right round the corner (at least in the next couple of weeks).

... with the prominent exception of Bioshock, lingering around in my Linux library for months.
1 Likes, Who?

View PC info
Everyone I've talked to says that the story DLCs are mediocre at best and not really worth it (I've only played a little bit of the base game on my friend's PS4). That said, I'll still likely pick up the GotY Edition.
0 Likes

View PC info
From what I've seen the DLC isn't amazing, but adds little bits here and there. The main game is great either way.
0 Likes

Quoting: micmonI will pick this up up well. I stopped playing AC after part 3 but this one looks awesome.

AC as in Assassin's Creed? What relevance does that have to Shadow of Mordor?
0 Likes

View PC info
SoM seem's quite focused on straight up fighting from what I've seen/read, which is the least interesting part of these games, but here's hoping there's more to it. I'm all about the exploration and the story, and the side quests and stuff like that. The new Batman is bound to be more up my alley.

Quoting: adolsonAC as in Assassin's Creed? What relevance does that have to Shadow of Mordor?

Well Assassin's Creed is one of the best known (although not the best IMHO) game series in the third-person open world action genre. Or whatever you'd call 'em. The similarities are definitely there, noted by several reviewers.
0 Likes