Shotgun Farmers, the FPS where you grow your weapons has a decent update with bots 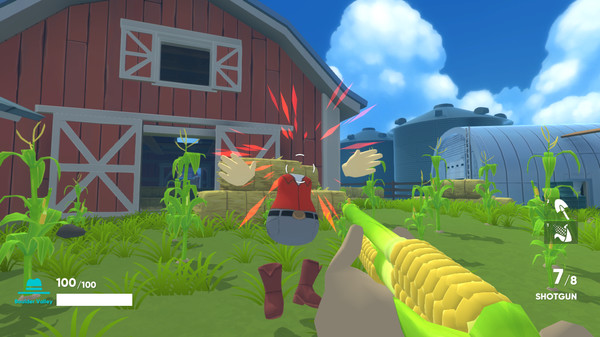 Shotgun Farmers [Steam], an FPS game where missed shots that hit the ground end up growing more weapons has another update with bots in online matches.

One of the biggest issues most online indie FPS games face, is a small player base. Thankfully Shotgun Farmers now includes bots in online games! Bots were already in the practice mode, so bringing them over to the online mode was kinda obvious to do. The bots are smarter now too, since they can now climb ladders and jump off buildings.

The spawning mechanic was adjusted too, so you hopefully won't spawn near enemies now to make it a little more balanced.

The practice mode was also expanded, allowing you to pick the game mode. On top of that, the game now has more ambient sounds for all levels.

I tested it out for a bit earlier and the online experience is much improved thanks to the bots. The capture the chicken game mode is pretty hilarious, a good take on the capture the flag experience. Instead, you just have to hold onto a chicken to let your team accrue points. You're unable to shoot when holding the chicken, so you have to stay alive as long as possible.