Yacht Club Games have announced that Shovel Knight: Treasure Trove [Official Site] has officially sold 2 million copies, with Linux accounting for 1.1% of Steam sales. It's great to see another success story for an indie developer, as that's a pretty healthy amount of sales, especially considering the amount of competition when it comes to this type of game.

In their announcement, they actually left out Linux statistics completely (likely due to how small it is). So I reached out to the developer to ask about Steam sales with Linux being included and they allowed me to share this with you: 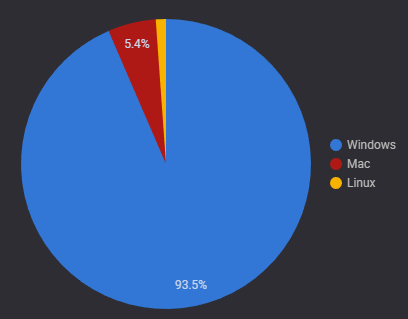 It is worth noting, that the Linux version was released several months after the Windows version, so it's possible a few sales would have been lost there. We know a timely release does affect Linux sales, with people running games in Wine or loading up a Windows install for some games (something I read about people doing quite often).

Also, when comparing PC (Windows/Mac/Linux) to other platforms, Windows itself only sold 24.4% of the copies with 3DS coming in hot at 23.9%.

Don't own it yet and want to boost their Linux sales a little or just fancy giving it a go? You can grab Shovel Knight on Humble Store, GOG and Steam. Note: Humble and GOG links are affiliate links.

Liamloading up a Windows install for some games (something I read about people doing quite often).

For every game that looks like it's Windows-only, I first try to see if there is/will be a Linux version soon (say, 3-4 months max). If there is, I happily wait. If not, I boot into Windows 7 that I keep specifically for this reason.

While I appreciate the efforts of Feral et al. even their announcements (let alone the actual port) tend to come many months, if not years after the Windows release (just look at the latest Tomb Raider).

If I were to wait forever just for the chance of an announcement I would have never experienced, say, Witcher 3 and I'm just not willing to do that.
1 Likes, Who?

View PC info
What I want to know, does Samsai's former copy still count as a Linux sale?

View PC info
I'm surprised that macOS is still above Linux sales. With Apple planning to kill 32-bit support in the future, I suspect at least a portion of macOS gamers will migrate to Linux (otherwise they'll lose their 32-bit games for good).

View PC info
his math is right, the number should be correct.

View PC info
Decided to remove my other replies to keep it clean, totally tired and staring at code didn't help my math obviously

ShmerlI'm surprised that macOS is still above Linux sales. With Apple planning to kill 32-bit support in the future, I suspect at least a portion of macOS gamers will migrate to Linux (otherwise they'll lose their 32-bit games for good).

I wouldn't take it for granted. If support for older games or software was a concern for macOS users, the switch to OS X or Intel CPUs would have driven much more users away. Instead, when something can't run any longer, Mac users tend to upgrade their hardware, or software, or both.

For example, when OS X 10.2 was released, Apple ended OS 9 support. At the time, the standard in desktop publishing was QarkXpress running on Macintosh computers. When Quark failed to deliver an OS X version, Adobe just stepped in with InDesign. People just switched to OS X + InDesign, which in most cases meant new hardware + an InDesign licence, as OS X was much more demanding than OS 9.

Another example, as a result of the abandon of Mac OS Classic emulation because of the switch to Intel, people couldn't run OS 9 games any longer. Yet, they happily bought Intel-based Mac rigs. So how did they run their favourite games? They started to run the Windows versions... On Wine. I'd bet they'll keep doing this with 32bits-only games.

Because Apple saw this strategy of endlessly breaking compatibility in order to make people upgrade more often works, they just keep doing it. It allowed them to survive as a company, as many companies never bought hardware, because their Mac just kept working great, years after years. But on the other hand it drove away a tiny bit of their user base, which includes, well, me. But that's not the case for the large majority of their user base, and when people started to buy iPhones, it even expanded some more.