The indie singleplayer FPS 'Ravenfield' [Steam] has a new release out, which adds in custom weapon support, with an overhaul to the loadout UI. 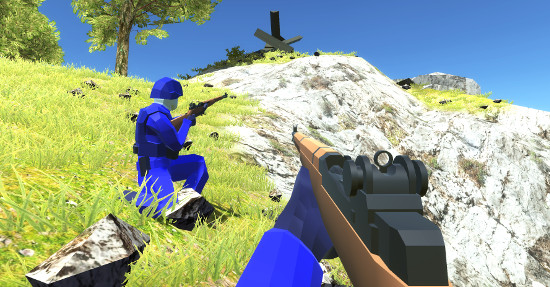 There's already tons of weapons available on the Steam Workshop, so this is a pretty awesome update. On top of that, they've add in a new official weapon, the M1 Garret (inspired by the classic Garand) rifle. This new rifle even has that satisfying ping sound when you empty the clip.

Naturally, I went looking to see what people have made and to my surprise the M41A Pulse Rifle from the Aliens film is in the workshop. Love it, even sounds just like it.

I do love where they're going with it, making it more and more customizable as each update comes in. Same complaint as always though—I want online play. There's only so much fun you can have with bots and it really would be hilarious to play online.

Article taken from GamingOnLinux.com.
Tags: Action, FPS, Indie Game, Steam
3 Likes, Who?
We do often include affiliate links to earn us some pennies. We are currently affiliated with GOG and Humble Store. See more here.
About the author - Liam Dawe

View PC info
I played itch.io 's version, and I really enjoyed even with bots, but I will just buy it when the multiplayer arrives.
0 Likes

View PC info
Are the character models and such place holders? seems very low poly with no textures doesn't fit the environments.
0 Likes

Quoting: MarechalLimaI played itch.io 's version, and I really enjoyed even with bots, but I will just buy it when the multiplayer arrives.

They have no plans for multiplayer.


Quoting: TheRiddickAre the character models and such place holders? seems very low poly with no textures doesn't fit the environments.

Think that's the style they're going for.
1 Likes, Who?

QuoteI will just buy it when the multiplayer arrives.

I bought this game BECAUSE there is no multiplayer! Its also one of the few games I actually paid full price for on Steam. Tried the alpha from their site, loved it, bought it on Steam. The fact that it runs on my Atom based Chromebook with Manjaro installed is even better!
0 Likes
While you're here, please consider supporting GamingOnLinux on: