Along with trying my son out with Putt-Putt, another one I tried to great success is Slime Rancher and it's awesome. 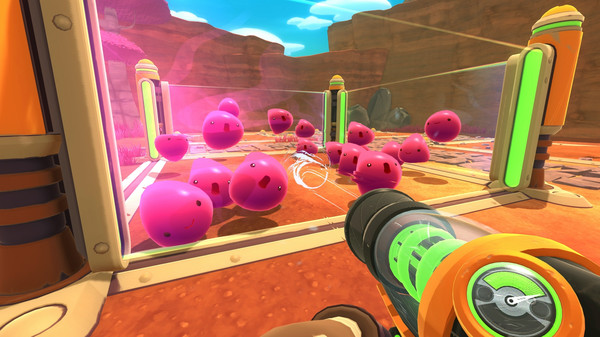 Disclosure: Key provided by developer for Steam, GOG also provided me with a key to their version.

Note: Slime Rancher is currently in Early Access, but it's very playable.

I was already a fan of Slime Rancher for being incredible cute, engrossing and unique all at the same time.

What I love about the game is that it has gamepad support, so playing it on the couch with a Steam Controller is beautifully easy. I find this quite essential to have a good experience with my son, sitting at the computer just doesn't seem as fun when there's two of you.

There's lots to love about Slime Rancher even this early on in its development. With lots of different types of slimes to capture and mess with.

It has exploration as it has a few different areas, farming with different crops, slimes to capture (some of which can be menacing) and so much more to it. Feeding slimes and have them essentially poop out different coloured diamonds to exchange for currency is something to giggle about that's for sure. Different colours give you a different amount of money, so to get megabucks you will need to hunt for the different coloured slimes.

It even has a day and night cycle, with the ability to have a torch so you can still explore the games simple beauty at night. If your child is brave enough that is, mine wasn't. Luckily you can go into your house and sleep until morning, which kept my little one happy as a pig in muck.

The idea of farming funny little bouncing slimes not only puts a smile on my face, but it totally captured someones interest:

Slime Rancher, another good couch #SteamOS and #SteamController game for kids "its getting away daddy!" @monomipark pic.twitter.com/eH4ZVM3zgZ

My son loved it so much he was extremely upset when it was time to put it down, so it must be something special.

It isn't a kids game, but it is non-violent and fun for all ages. Simple to understand, yet it has a certain depth to it too.

The game can be found on both Steam and GOG.

I am the owner of GamingOnLinux. After discovering Linux back in the days of Mandrake in 2003, I constantly came back to check on the progress of Linux until Ubuntu appeared on the scene and it helped me to really love it. You can reach me easily by emailing GamingOnLinux directly.
See more from me
Some you may have missed, popular articles from the last month:
The comments on this article are closed.
2 comments
Swiftpaw 21 Aug, 2016

View PC info
Hopefully the devs will bring more depth and content to flesh it out. Could end up being a really great game, it just needs more game!
1 Likes, Who?

View PC info
I wish they would port Lili: Child of Geos, seems like a great family game.
0 Likes