By BTRE - 7 May 2017 at 6:43 pm UTC | Views: 7,650
Following a successful crowdfunding campaign, the first episode of the point and click adventure game, SnarfQuest Tales [Official Site] has gone gold and has been available for some time. 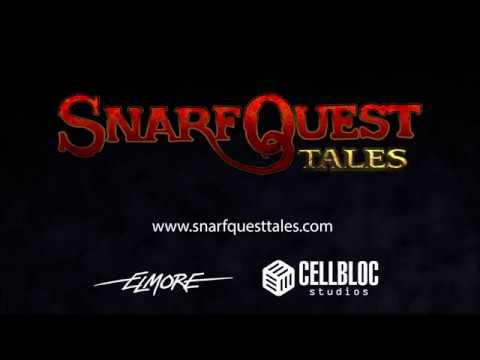 YouTube videos require cookies, you must accept their cookies to view. View cookie preferences.
Accept Cookies & Show   Direct Link
For those of us who grew up poring over tabletop RPG books and relishing the cool artwork, the name Larry Elmore should be familiar. He illustrated many things for the earlier editions of Dungeons and Dragons and the Dragonlance universe. He created a humorous comic in the 1980s playing to all these fantasy tropes called SnarfQuest, which has now been adapted to an episodic adventure. In this game you take control of Snarf, a zeetvah, looking to make a name for himself and acquire enough riches to be made into the next leader of his village.

I had a chance to play through the brief demo. You’re presented with a few simple interactions in your family home before you go out and adventure. There you must solve a few basic puzzles of different types and interact with your family, showing off both core mechanics of the point and click genre. I found some of the dialog to be mildly charming but the puzzle solving a little too basic and uninteresting. It’s not a particularly pretty game either, but the background art and assets looked interesting in places at least. Granted, it’s likely to be the very first area of the game but it doesn’t exactly make a lasting impression.

The rest of the episodes should follow in due course, but it’s not very clear when they’ll be released. All of their development news seems to be found on their Kickstarter page.

View PC info
Honestly , the voice acting is great. The game looks , at least from the trailer, like a cheap asset flip thrown out there.
Will hold off on a sale and more reviews.
1 Likes, Who?

View PC info
I would expect them to up the texture resolution - looks muddy atm. Also the mouse character's voice seemed a bit off in comparison to other voices... but other than that, looks decent.
0 Likes

View PC info
I like that in a world dominated by digital distribution we still use the term "gone gold" when it's highly unlikely then that they produced a "gold" master cd for reproduction ;)

But then we still use a floppy disc for the "save" icon even though most PC users today properly never seen one.
0 Likes
Aryvandaar 8 May, 2017

View PC info
Wow. It says Windows and not PC to mean Windows. :O
6 Likes, Who?

View PC info
Sounds like the guy who does the Honest Trailers. As for the game, I think I'll pass.
1 Likes, Who?
Purple Library Guy 8 May, 2017
Nostalgia is great and all, but to be perfectly blunt I remember Snarfquest, the old comic thingie, being kinda meh. Some fanservice, some muddled antiheroes, some mildly amusing "zany" situations, a bit more fanservice, and that's about it.
0 Likes
While you're here, please consider supporting GamingOnLinux on: