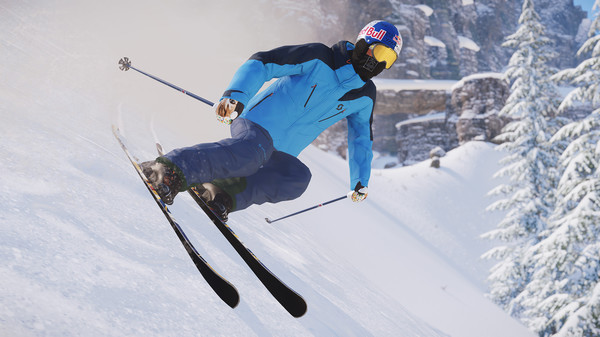 SNOW is incredibly interesting, mainly as it's our first proper winter sports type game to have on Linux & SteamOS, it's a bit buggy though. It's free, so no big loss right now if it's a bit iffy.

Issues
First thing, is it will probably die right as soon as you launch it, but some fine folk found out how to fix that. You need to open up system.cfg in the games install folder, and edit:
s_AudioSystemImplementationName="CryAudioImplFmod"
to
s_AudioSystemImplementationName=""
That will at least allow it to launch, but then you have no sound. The developer is now aware of it, but initially put it down to an "an unsupported version of Linux", thankfully more reports are coming in to debunk that.

I also see no mouse pointer in the main menu, despite moving it around enables me to select things. So, I assume that's a bug too.

The settings menu shows up empty, so I get a tiny window.

It's just as bad on SteamOS right now, no sound (but it does launch), cursor appears during gameplay and moves across the screen whenever you move too.

Not the best launch. Hopefully we will see a patch soon to address the audio issue and the non-starting issue, as I can't wait to give it a proper go.

About the game (Official)
SNOW is the only free-to-play, open world, winter sports game. Explore a massive mountain, customize your character with clothing and equipment from the biggest brands, and compete in events to be the best. Or head online and explore the mountain together with other players! Article taken from GamingOnLinux.com.
Tags: Early Access, CryEngine, Free Game, Sports, Steam
0 Likes
Share

View PC info
This is but one of a multitude of reasons of why I don't play early access games.
0 Likes

Quoting: elbuglioneCRYENGINE ON LINUX....
it's happening

Bring on the Star Citizen!
4 Likes, Who?

Quoting: GuestWith this much in DLC, I expect the free content to be pretty shallow...

Usually, I'd agree and I avoid F2P games, but in this case, it might actually be a good thing. This is the first cryengine game on Linux (I think, correct me if I'm wrong), and no matter how shallow the game itself might be, it's a great test case for CryEngine on Linux. Anyone running Linux can download this game for free and test it without any big expectations. If the first CryEngine game had been a $60 AAA big name game, fewer people would have access, and people would obviously expect more.
I'm not really into sports games, but I certainly plan on downloading this, just to see how it runs on my PC and maybe contribute a bug report.
Hopefully, the developer's experiences and feed-back will lead to improvements in CryEngine, or at least in the documentation for shipping on Linux.
3 Likes, Who?

Quoting: GuestAnyone running Linux can download this game for free and test it without any big expectations.

That's not a good thing. Gamers shouldn't be wasting time testing games for developers. (Especially a game that has DLC for gullible gamers to waste their time & money on. Joy.)

It's come to this has it?

If you read the describtion its "ingame credit", so its free to use but has no max price. Therefor it seems to be bit like TF2 item drop and market system, where you can try to play for an item or just buy it.
0 Likes
1/3»
While you're here, please consider supporting GamingOnLinux on: