I had been complaining about how hard it was in DiRT Rally with a tiny gamepad stick, so I picked up the Logitech Driving Force G29 Steering Wheel and here's some initial thoughts on it.

What a truly brilliant experience it’s been, thankfully so since it’s not cheap as I was worried what I would think of it. For the most part, it’s plug and play which nearly brought a tear to my eye.

As soon as you plug it into the power and then into your PC via USB, it spins around by itself to do some sort of calibration. I will admit, It was a little startling that it just started doing it by itself! 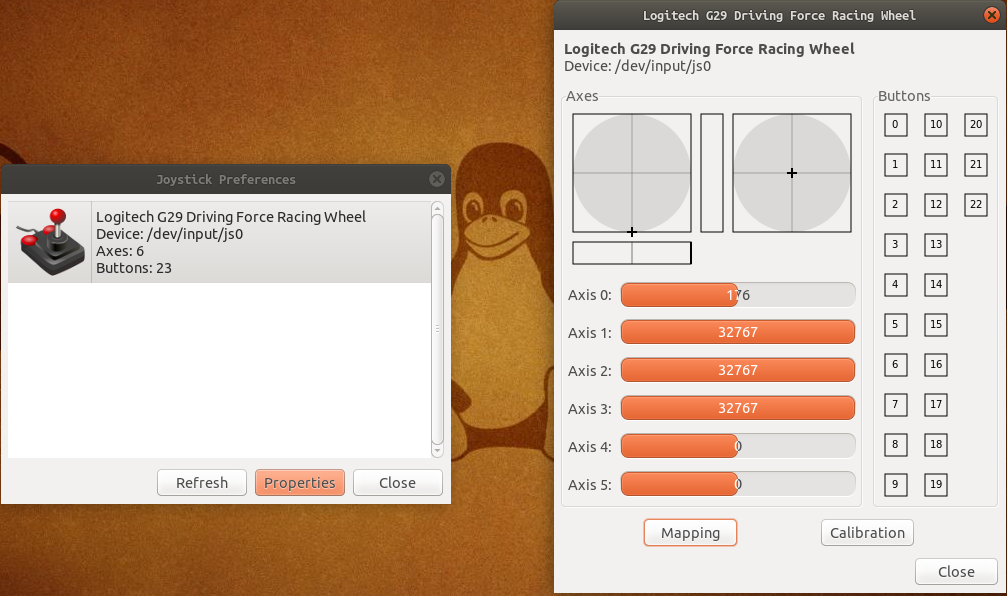 I then loaded up jstest-gtk and it was picked up and calibrated properly out of the box. That quite literally blew my mind, that Linux gaming is at the stage where an expensive wheel and pedals will be picked up instantly without issues. I've also been really impressed with jstest-gtk, although it's nothing new I've rarely had to ever use it.

To give you an idea of the size, here's some shots: 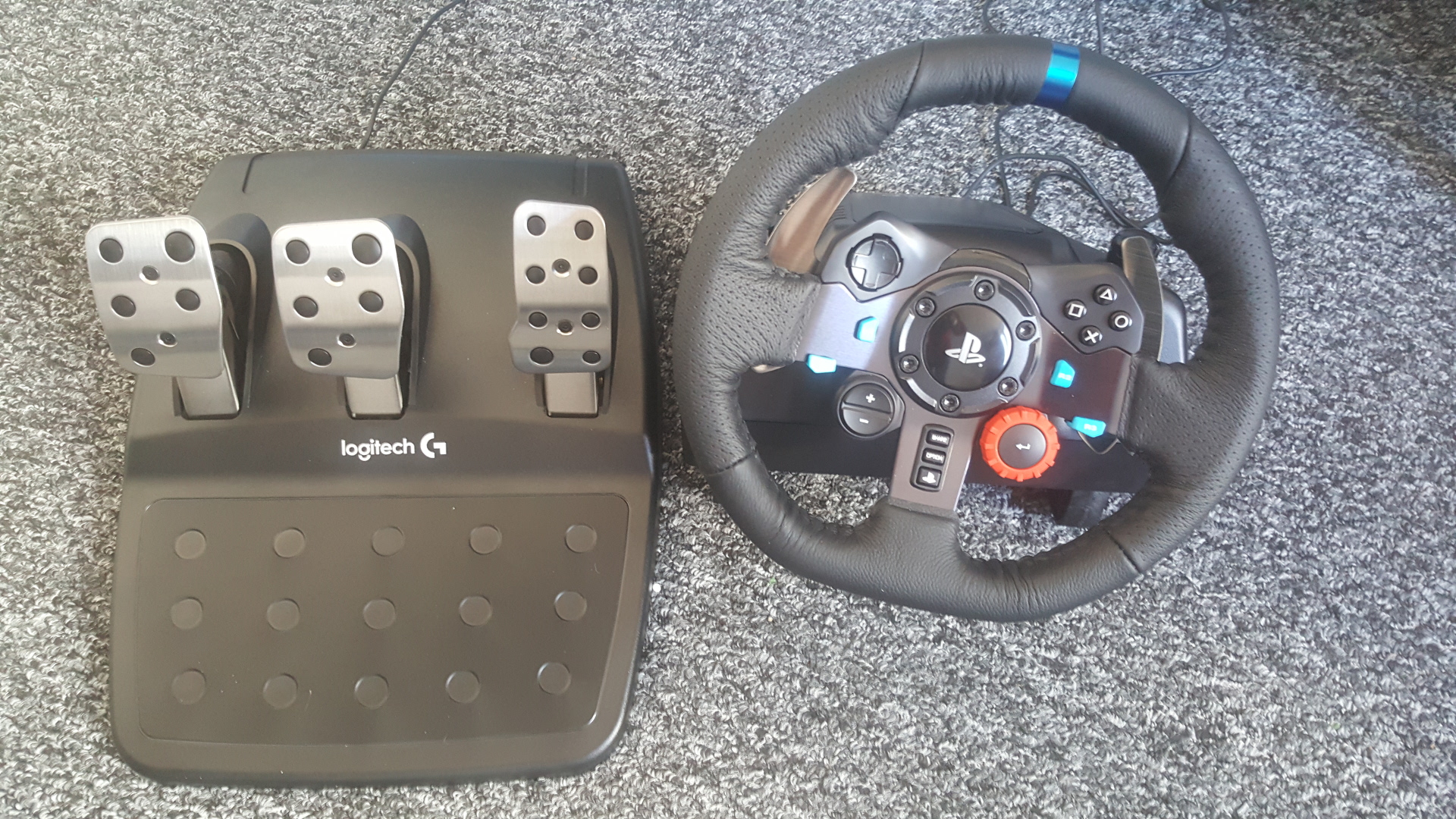 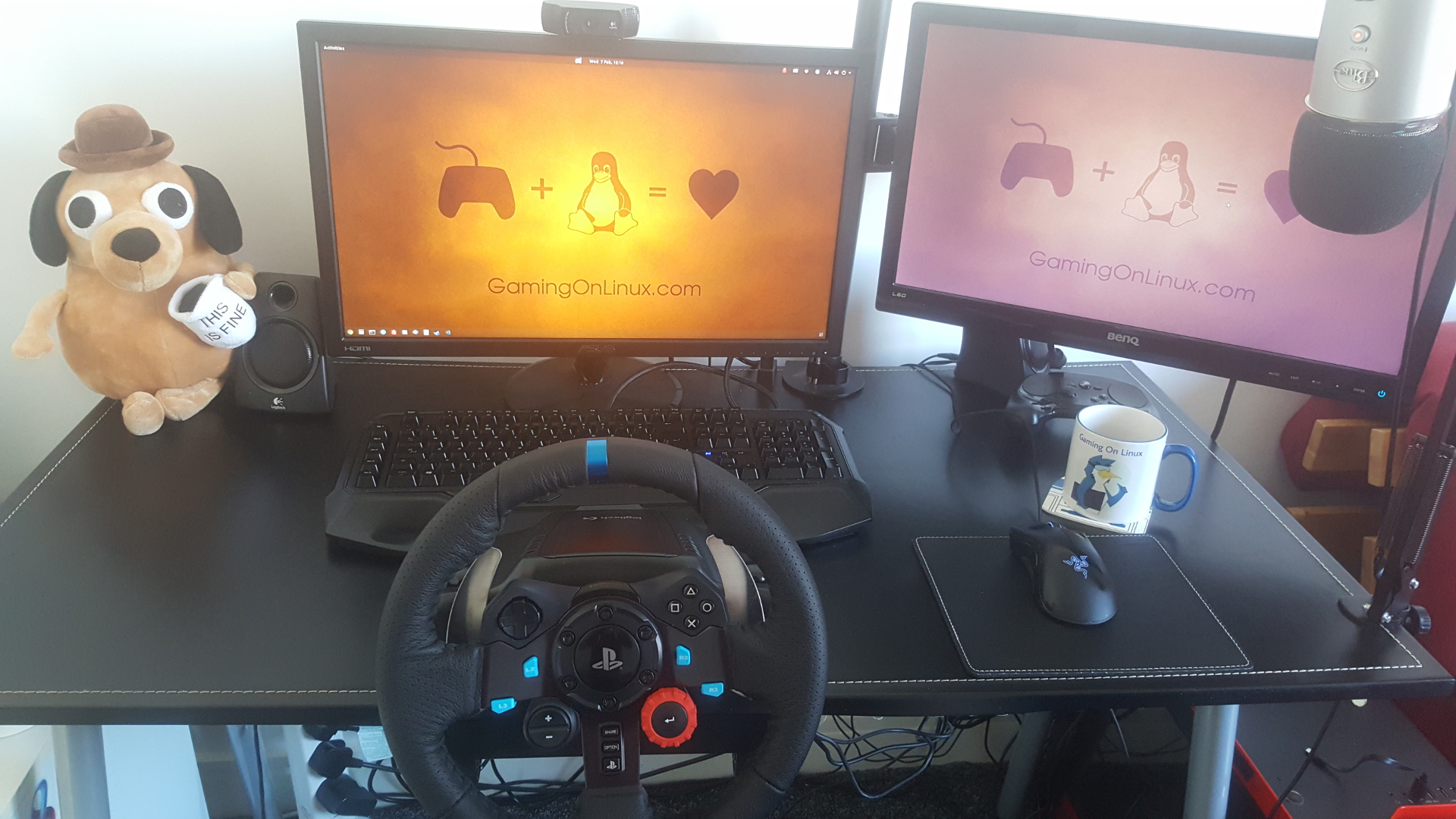 Like all new hardware, it takes time to adjust. I personally found it incredibly difficult at the start, but it’s such an massively different experience compared with a gamepad that it’s made me truly love driving games. I already enjoyed driving games, now I absolutely adore them. While it's true that the G29 is plug and play, it will probably take you quite a long time to properly adjust to it and get everything set up in a way that feels good to you.

One part of the issue, is that by default the Logitech Driving Force G29 has a 900-degree lock-to-lock rotation, which is quite a lot, especially so when you’re in a racing game where you likely want it to reach the maximum rotation sooner. Thanks to multiple people from our Discord for helping with this, I'm going to show you how to adjust it. Firstly, you can try this script on GitHub which seems to work quite nicely. Although it does force it into G27 mode (I will talk about that below as well). Otherwise, you can do these commands manually below.

Once plugged in, you can run this command first in terminal to find the exact ID of the device:

To find out the current rotation range you can do this:

To then adjust the maximum rotation, you can run a command like:

You may need root privileges to do that command, with 540 being the total degrees to maximum. You can tweak that number to your own preference of course. Pretty awesome that this will literally limit how far you can turn, making it quicker to reach the maximum. For a fast-paced racing game, 900 was just far too high.

The G29 also comes with a compatibility mode, where you can essentially turn it into a G27 if certain games don’t work correctly with it. In the case of DiRT Rally, the G29 gives you a reduced set of options so putting it into G27 mode is actually a lot better. To do so, you can run a command like this:

You can simply replace G27 with G29 to change it back.

The downside of those commands, is that it will reset it each time you unplug it. However, if left plugged in it does seem to stick between shutdown and reboots.

I mentioned earlier how I found DiRT Rally quite difficult, well, hilariously the wheel made it even more difficult for me to begin with. Part of that was the force feedback being so unbelievably intense on the G29. This is partly due to the issue mentioned above, where in DiRT Rally the G29 has fewer features you can toggle, so some of it was always at 100% (it really was insane!).

We actually have a few racing games on Linux now and with that I hope more in future, to at least allow me to enjoy it even more. Both F1 2017 and DiRT Rally work really nicely with it and I do plan to test plenty more in good time.

As a bit of a joke, for you to all laugh at me, here’s what happened the first time I tried it in DiRT Rally. This was before I knew about any of the options above, so I didn't really have the wheel set up at all and the pedals where far too sensitive for me. Still, it was amusing: 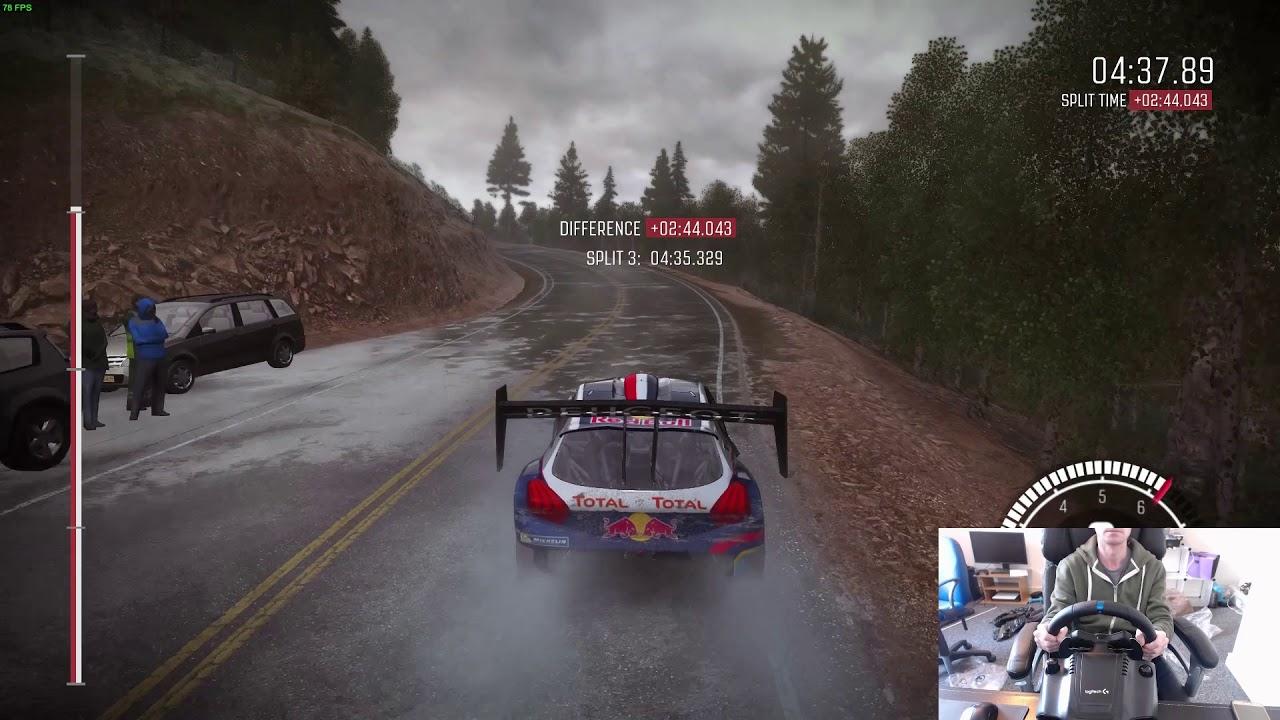 No audio from me, as the force feedback would have been constantly picked up by the microphone (I really need a shock mount).

You can usually find the Logitech Driving Force G29 on Amazon, Ebay and other stores. The price varies, but I’ve seen it for as “low” as £184.97 on Amazon and much lower on Ebay if you’re buying second-hand (which is probably a better idea to do).

When deciding on purchasing a wheel, the main thing to ensure you do is a bit of basic research. Take a look at what wheels Feral Interactive ports work with, if they work with Feral games then they should be safe for some other games too.

As a little extra, here's a portion of the livestream I did with it to talk about it a little. This is after I was able to do all the changes mentioned above, so the force feedback wouldn't be so loud and intense, with the pedals sensitivity set up better for my feet. 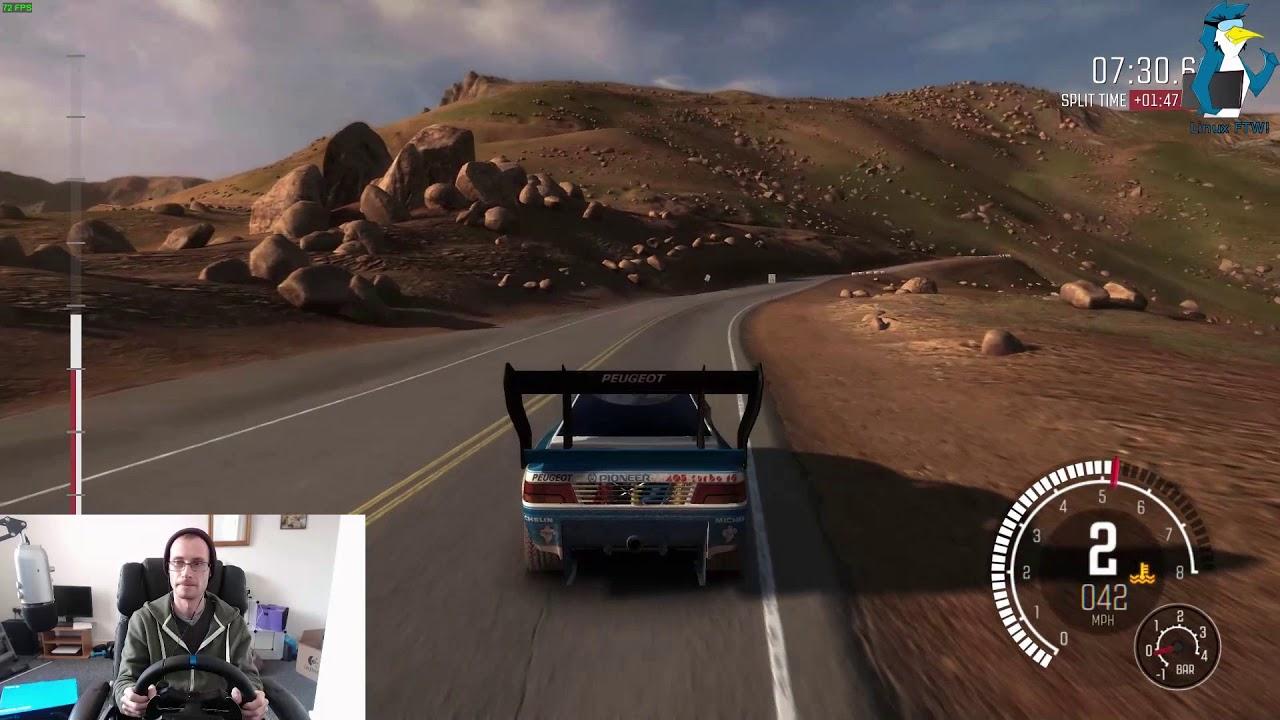 The build quality so far feels pretty good, the wheel certainly has a bit of weight to it and the table mounting clamp system is built-in, rather than a separate piece to attach that I've seen other wheels use. You adjust the large screws on the top of the wheel for the size of your table, slot it on and it secures it quite nicely. It also has screw holes to fit it onto specially designed seating systems.

Is it worth the money? Absolutely. It's become a new nightly routine for me to have a blast with it.

Article taken from GamingOnLinux.com.
Tags: Hardware, Review
16 Likes, Who?
We do often include affiliate links to earn us some pennies. We are currently affiliated with GOG, Humble Store and Paradox Interactive. See more information here.
About the author - Liam Dawe

I am the owner of GamingOnLinux. After discovering Linux back in the days of Mandrake in 2003, I constantly came back to check on the progress of Linux until Ubuntu appeared on the scene and it helped me to really love it. You can reach me easily by emailing GamingOnLinux directly.
See more from me
The comments on this article are closed.
46 comments
Page: 1/5»

View PC info
this program i use to config a logitech gt driving force https://github.com/thk/LTWheelConf
and the instruction here i use https://steamcommunity.com/sharedfiles/filedetails/?l=spanish&id=142372419
1 Likes, Who?

View PC info
Looks really good. But although racing games are by far my favourite genre, I still find it hard to justify shelling out so much cash (almost as much as I paid for my entire PC, not counting the GTX 750 I shoved in it a couple of years back) to make two games - DIRT Rally and GRID Autosport - a bit better. In fact, although I say so myself, I'm pretty good at GAS with an XBox controller, so it's really only DR that would benefit.

I'd love one, but not until I win the lottery.

View PC info
Thing is though, My existing thrusmaster F430 wheel was supported in F1 2015 + others, In F1 2017 it is not. I refuse to buy another wheel as there is no guarantee that this will be supported in upcoming titles !

Side note, You suck with a wheel just as much as with a controller

View PC info
Is there a driving wheel that works great out-of-the-box on Ubuntu / Ubuntu MATE? No need to edit anything using the Terminal.
0 Likes

View PC info
I think it's great that it works out of the box, and for those who play driving based games constantly these are perfect.

However, I can never justify the expense for myself, they take a fair amount of space, and for the full kit (wheel + gearstick + pedals) would set me back £300 and that's a heck of a lot for a game pad controller!

But either way, I'm pleased to see it works on Linux so well! You mentioned the wheel calibrated? Did the pedals do the same? would be cool if you could be watching a replay of your race and the pedals/wheel were moving to match the replay of what you did

It'd give you the self driving car experience!

its pretty hardcore if you do not have a co-driver to say notes whats coming up. I think i haven't driven this track before, so only been able to push when i see the track, some blind corners ofc you have to take more carefully if you don't know whats behind it.

I have Driving Force GT and its been amazing experience so far with the wheel.


Ofc Rally with a co-driver fits me more, so heres some older video of me pushing for GOL League in Finland

View PC info
Why does Logitech use PlayStation logo?
0 Likes

View PC info
Liam... don't use from-the-back camera when you drive. Use either from-inside, or on-hood.
3 Likes, Who?

ShmerlWhy does Logitech use PlayStation logo?

Because the G29 model is mainly marketed as an accessory for the Playstation. The mostly identical G920 sister model sports the XBox One logo and button layout instead, but for some reason is missing the gear change leds and a few buttons.
0 Likes