Some thoughts on Demise of Nations, a 4X strategy game

Demise of Nations [Official Site] is, at its heart, an ambitious game. A turn-based 4x game that touts much which makes others in the genre so compelling. I gave it a look to see if it stacked up with the greats. 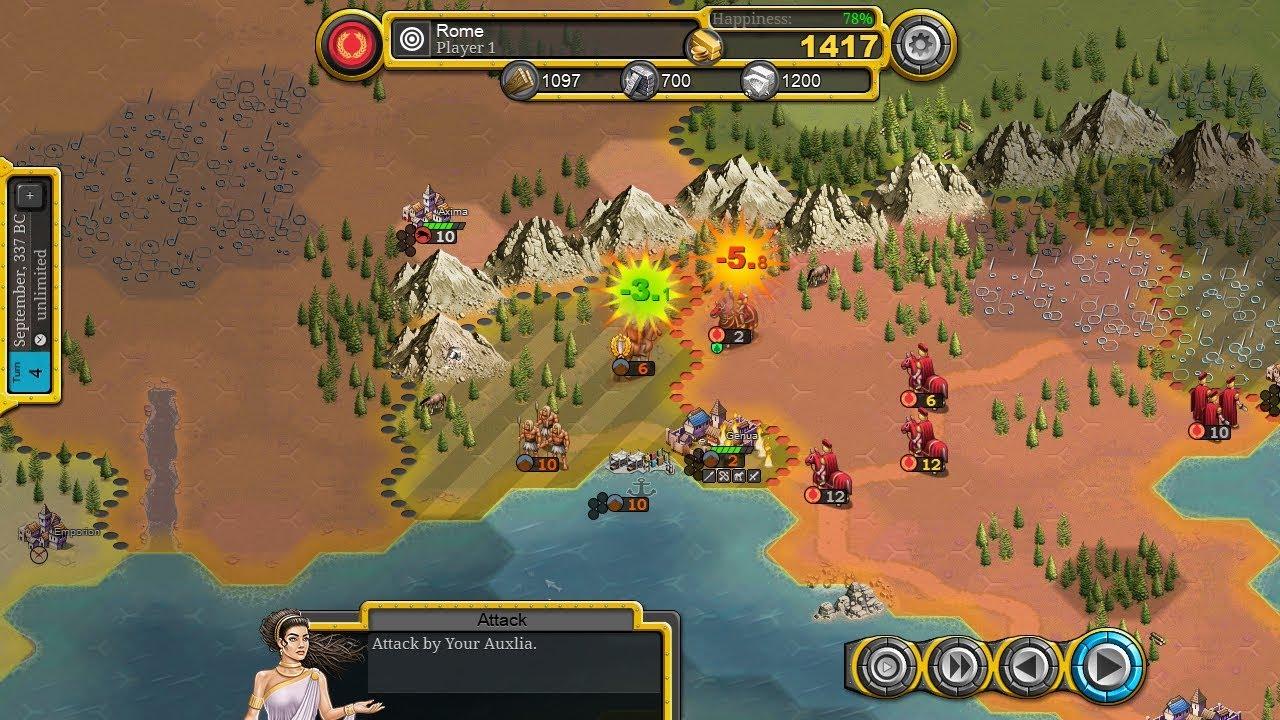 YouTube videos require cookies, you must accept their cookies to view. View cookie preferences.
Accept Cookies & Show   Direct Link
Note: Demise of Nations is nominally free to play. This limits players to a single map and they can purchase more individually or buy a bundle of them. I was given a key by the developer that includes their map bundle.

This is a game that throws you right into the thick of it as soon as you start up a scenario. Every single map is geared towards conquest and domination. Units capture territory as they move and exploiting resources serves almost exclusively to fuel your military machine. Every scenario from the ancient Mediterranean to futuristic war in the Pacific is centered around this design choice. This is both the game’s greatest strength and biggest weakness.

Things are easy to understand. The pair of tutorials are utterly woeful, but I think that anyone that’s spent a few hours with other turn-based games will come to understand how things work in Demise of Nations fairly quickly. Pretty much every resource, every building and technology is just there to help strengthen your military machine. Getting more of the different resources will allow you to build different types of structures in your cities which, in turn, allows you to field a varied and powerful army. Units capture territory on move orders, making it so that games are dynamic and focused around your armies. 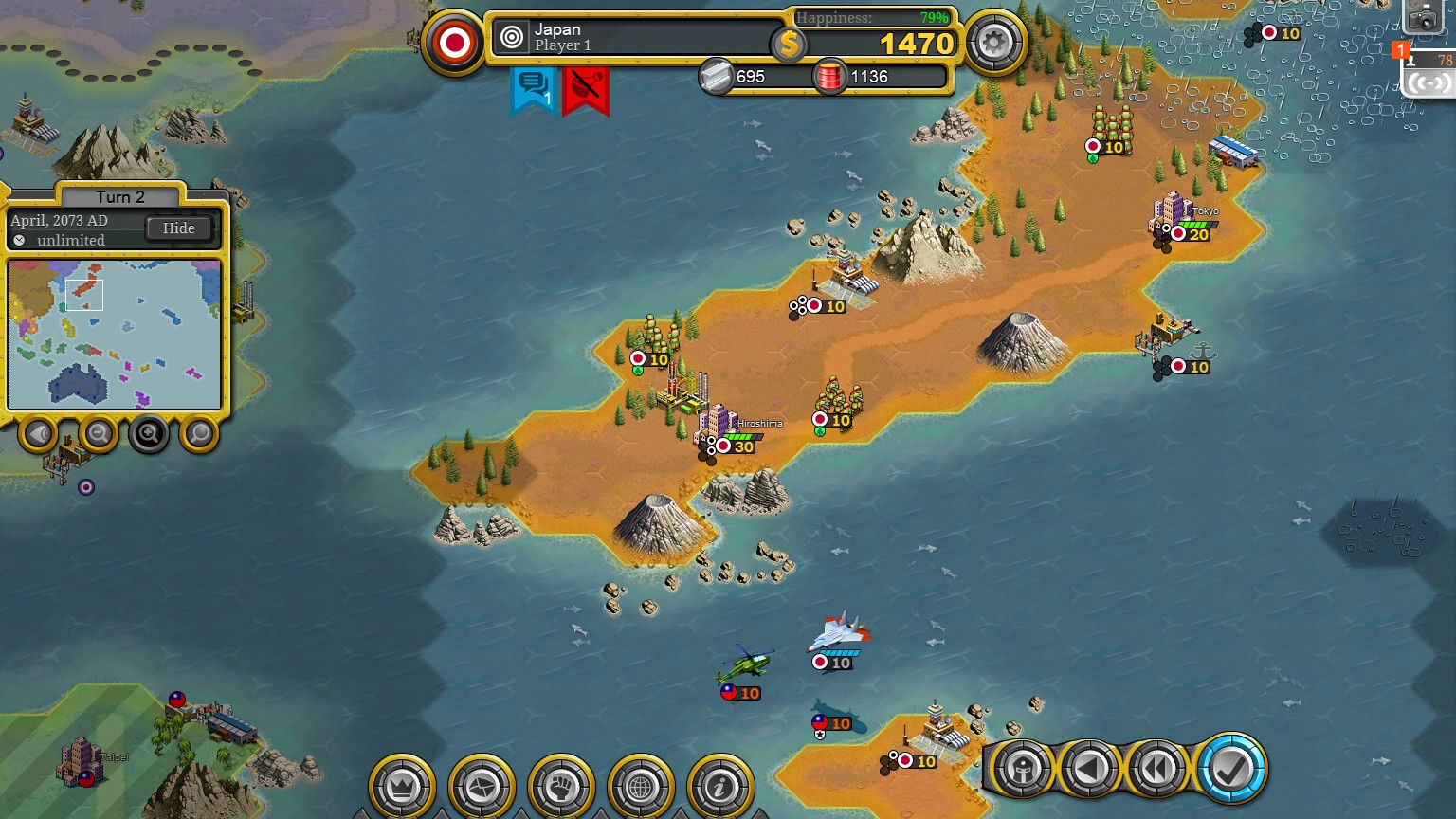 In essence, this is a wargame. Which is why I started to get bored of the gameplay after a while. There are a few different possible win conditions you can set up at the beginning of the game but all are ultimately centered around controlling territory or having a strong military. If you’re looking for peaceful and dynamic strategies like in the Civilization series or Paradox’s grand strategy games, you’re out of luck. Every match eventually becomes a grind of conquering cities and territory until one player wins. Diplomacy, much like every other system, is there as a window dressing—as something to make it so you’re not just clicking units around.

The same goes for just about every other system in the game. And boy are they tedious to manage! Just about everything in the game requires one of five resources: food, stone, wood, iron or gold (the modern-day scenarios use oil and steel instead). You get some each turn for each developed resource in your territory and certain buildings in your cities. Units and buildings often use a combination of these resources for upkeep and construction. Often you’re short on one resource and rich in another—fair enough, strategy balance 101—and are forced to trade to have enough for your plans. The problem is that this requires either direct diplomacy (which can take a turn or two to resolve) or the in-game market that’s in a menu you have to click. You basically spend half of the game buying and selling resources to have a surplus of everything, having to waste time to open this menu. What’s more the resource icons at top don’t have tooltips, meaning you have to dig into the same menu to see your production per turn of each.

Research does occasionally unlock building and unit upgrades but applying them can also be an exercise in frustration. Resources on the world map aren’t always clear and sometimes a mountain that’s quarriable looks about the same as another mountain at a glance and you basically have to click on a tile and press on a sub-button to open a popup that lets you select what the hell you wanted to do. It’s needless busywork and something that really ought to have been streamlined with a “construction mode” or overlay that allowed you to quickly and efficiently construct things. And don’t even get me started on cities! Don’t have enough resources for a building? Well, you have to close the menu again, trade for resources in its own menu, click on the city again, open the submenu, click on another button and build whatever. Utter tedium. 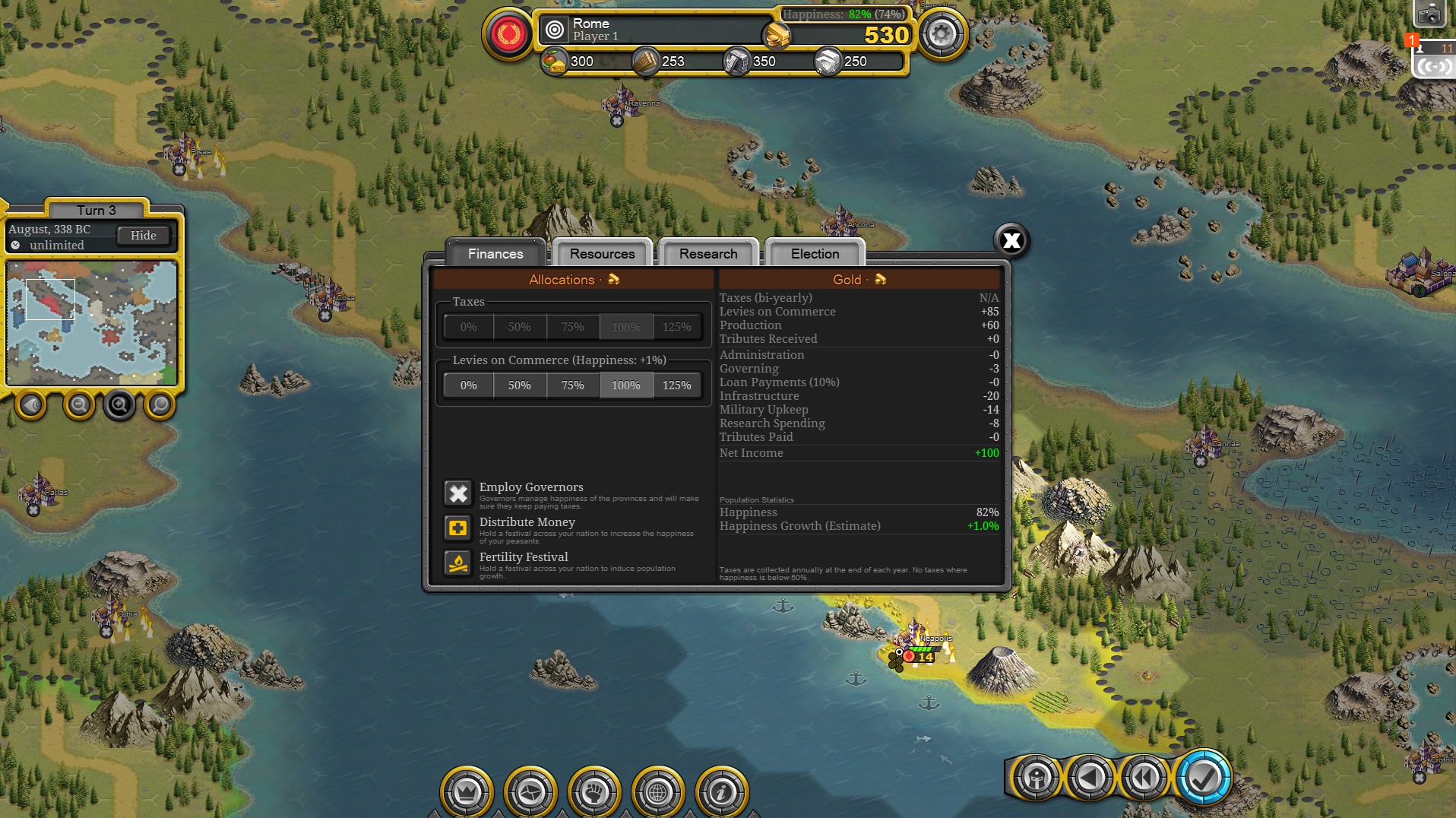 Things like taxation rates and special actions like festivals for your city are supposed to add flexibility to how you manage your empire. In practice, they’re mechanics that you can mostly ignore save if you wish to min-max your resources. At higher difficulties it can also make sense to take a closer eye on these things but, as the core of the game is combat, conquering more generally solves most of the problems you’re having.

Combat itself is simplistic. Units have stats, strengths and weaknesses, that are hidden away in menus. They can be told to take specific stances, replenish and a few other things as well. Still, all of that said, it’s not too punishing to focus on a few types of units and you can get by with sub-optimal deployments most of the time. Concentrating force and knowing which enemy units to take out first is way more important than specialization and force composition. There’s little tooltips that tell you the estimated combat results from any action and it’s easy to plan according to circumstances. This works well and it’s only when you large fronts in large maps that it becomes a boring hassle to command all your troops each turn.

That said, I really wish that the unit types were somewhat more distinct. This is a problem in both the modern era and ancient era maps. Everyone can attack everyone else; tanks can assault aircraft and boats can attack land units. They’re just units with slightly different movement ranges and navigable terrain types, making things feel less special than they do in other similar games. This isn’t a failing that’s exclusive to units—managing cities and techs in both modern day and ancient scenarios feels absolutely the same. The different eras have no substantial impact on gameplay. I would normally wish for other time periods such as the age of sail or medieval times but there’s little point to it if the gameplay is exactly the same. I could be fighting on the moon and it’d all be the same to my sense of engagement and immersion.

This is a game that’s inclined towards multiplayer, as well. The AI isn’t horrid but the fact that turns are resolved simultaneously is a big indication that they intended to foster that unpredictable human element to make the game more interesting. When playing a 10v10 it’s easy to gloss over the very many flaws about production, tech and combat. Gameplay is seamless and scales well to amount of players and doesn’t require much time invested by any party to see a match through. The fact that losing the “leader” unit means that a whole faction is destroyed and absorbed by the player who did so makes the games dynamic and fast.

There’s a caveat for multiplayer, however: as with their previous title, Age of Conquest IV, playing online requires player spend an amount of coins. You gain a few coins by logging in each day or winning matches and can always buy more at the store. It’s to cover server costs, supposedly, but it’s something to watch out for if you’re expecting to play as many matches as you want. 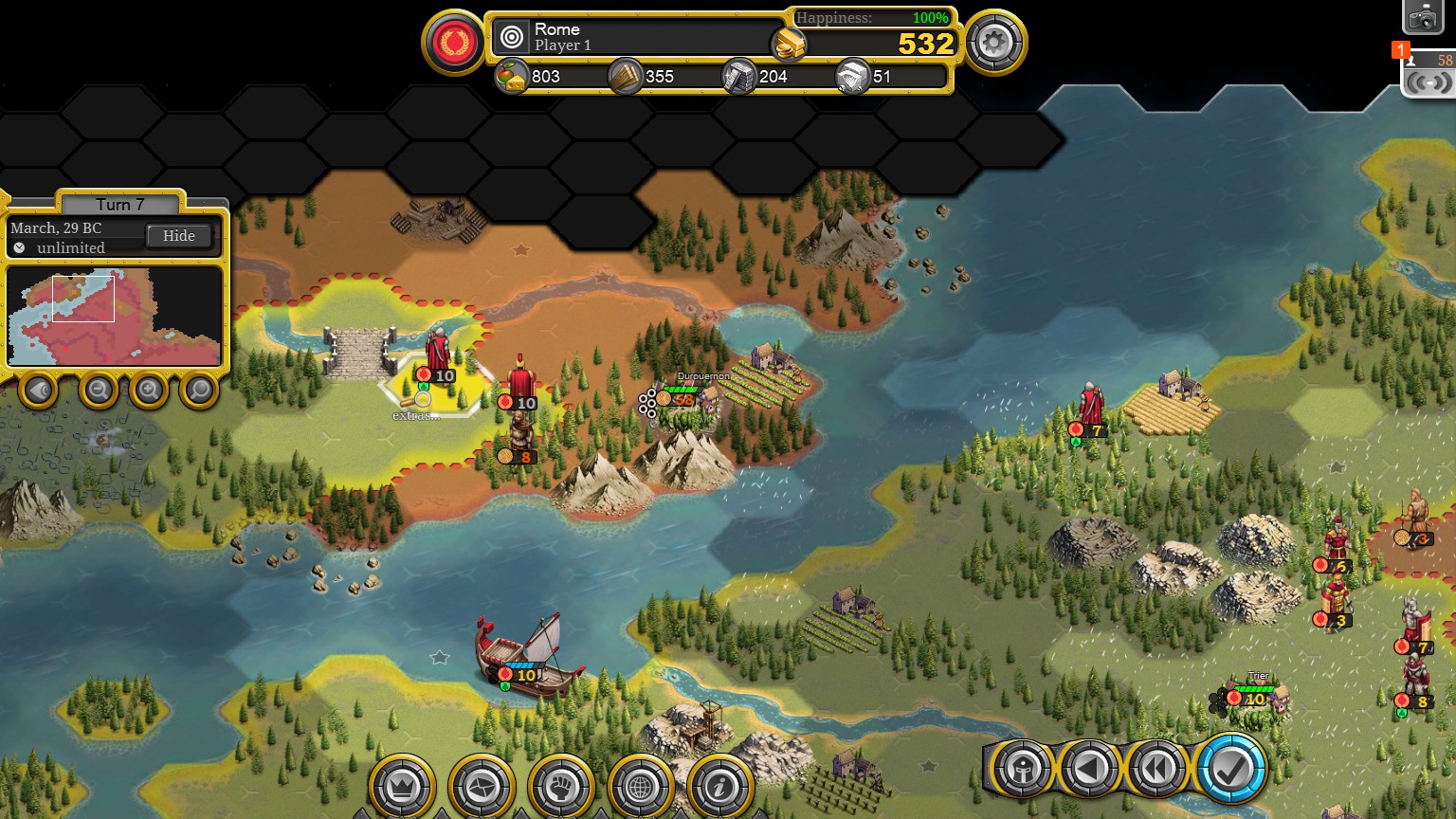 The game’s art and maps can be charming at times, but aforementioned issues with identifying resources and territory can take you away from that easily. A few units are visually unique to certain factions but for the most part you’re staring at the same sort of art, with the same sort of icons for the majority of the game. Like everything else in the game it ultimately feels interchangeable. The game is pretty mod-friendly so perhaps some of these kinks will be sorted out by the greater community with time.

I’ll fully admit that I’m a strategy nerd. I’ve spent thousands and thousands of hours in the genre, playing and enjoying everything from the most hardcore and obscure hex-based number-crunchers to the most casual and simple things. Demise of Nation occupies a strange niche in my opinion. It’s trying to be a casual pick-up-and-play sort of affair yet it forces tedious complexity like resource trading and so many darned stats that are hidden away in submenus and screens. This identity crisis brings the whole experience down and made the few moments of true fun I was having few and far in between. If you’re keen on playing other humans, then sure, I can recommend the game. Even then, I don’t see there being much of a long-term appeal.

You can grab Demise of Nations here and follow links to get it on itch or Steam if you’re so inclined. Article taken from GamingOnLinux.com.
Tags: Review, Strategy
2 Likes, Who?
We do often include affiliate links to earn us some pennies. We are currently affiliated with GOG, Humble Store and Paradox Interactive. See more here.
About the author - BTRE

dmantione 19 Aug, 2017
View PC info
What a luxury that we can compare 4X games with even bigger ones from Firaxis and Paradox. A perfect illustration that we are entering a golden age of Linux gaming.
2 Likes, Who?