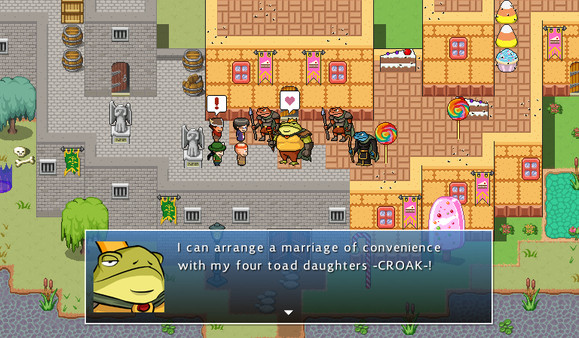 Now that I am feeling better I am going through my backlog. Today I took a look at the comedy RPG Doom & Destiny Advanced to let you know if it's worth your pennies.

The graphics from the screenshots did look quite good, but I have found that playing it myself to be a bit on the simplistic side. Not terrible, but certainly not standing out from the crowd.

The writing seems okay, but right now it does need quite a bit of polishing. There are a few spelling errors I noticed (which ruins the flow every time I spot one), and there's a bit of a crap nod to game developers in the starting dialogue with the characters talking about money.

I have to admit though, the first enemy gave me a really big chuckle. It was essentially an angry poo with arms and legs. It's main attack seems to be farting at you, and it's actually hilarious.

The game makes no sense during most of it, especially when you meet the Hulk Hogan spoof character. He goes on about not doing drugs, and I suddenly felt like I was reading one of the crappy "don't do drugs kids" and "fire is bad" leaflets I saw at school a million years ago.

The combat actually isn't bad at all. It has a really retro Final Fantasy vibe to it, and I actually enjoyed the combat a fair bit. You have a mix of different classes and abilities, you seem to be able to change the class of your characters and their outfits too which is pretty fun.

The humour in the game is pretty crass in all honesty (I saw a snowman with a carrot for a penis), but I didn't find it too terrible. The writing needs work, and the graphics really are simplistic, but it could be a bit of fun for a lazy day. I just hope they do a polishing pass over the writing soon. I imagine it's due to the developers being Italian, so they need a native English speaker to look it over for them. I've seen complaints about the English in the first game, and I've seen people give them tips for this game too, so hopefully they will sort it out before it's finished.

Honestly, I get the feeling that we really need the first game to be ported to have any idea about what is going on, as the game sort of thrusts you into it without any explanation.

I will give it another look to see if it has improved closer to release.