By BTRE - 9 June 2017 at 12:57 pm UTC | Views: 5,048
Solving mysteries, traveling to faraway lands and making a name for yourself is all in a good day’s work in this adventure game that combines strategy elements with plenty of charm. I gave the game and its expansion a look and have a few thoughts on it. 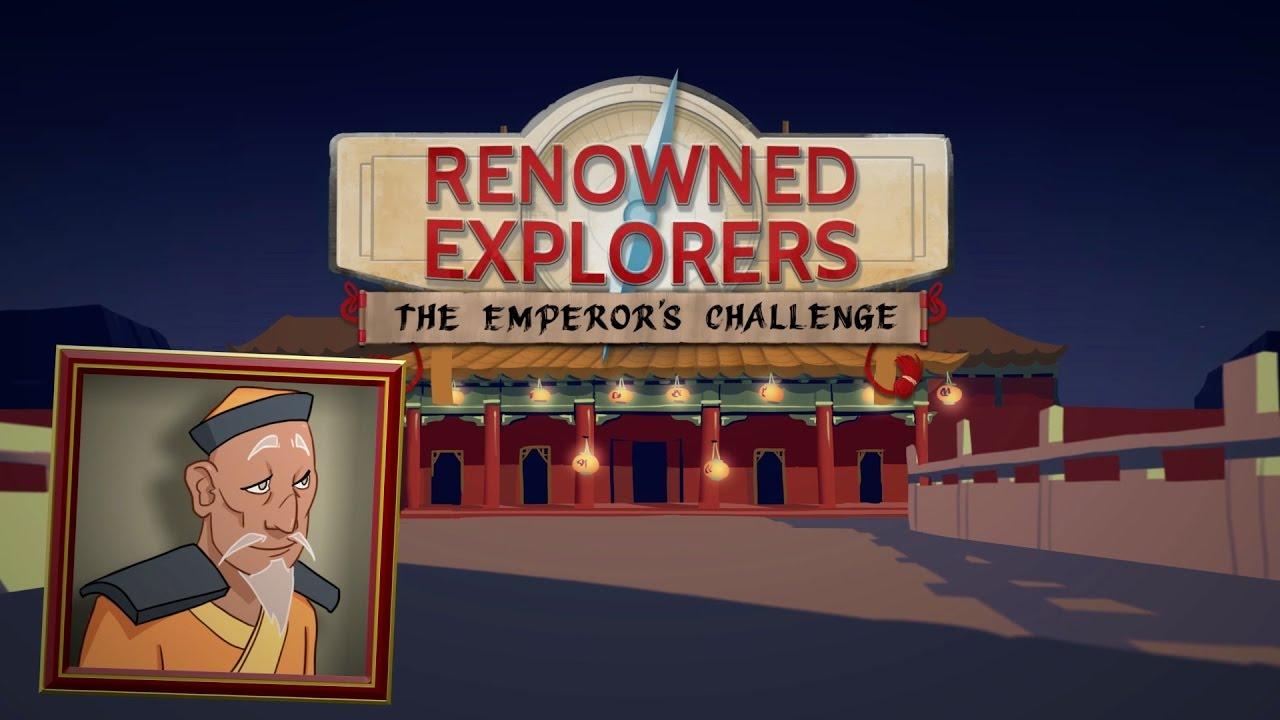 Renowned Explorers [Official Site] is set in a colorful and somewhat romanticized 19th century setting. Traveling to the different corners of the world, players control a group of explorers that are part of an explorer's society. Your scrappy group is dead set on traveling the world in an airship, discovering new and exotic things and making a name for themselves in the process. Add to that a healthy dose of humor and some self-awareness and you’ve got a rather fun premise for a game.

The game is centered around the group of explorers you build. You can select men and women of different classes such as scientists and scouts, each with their own particular skill set and preferred way of resolving conflict. What’s more, some of the more specialized skill unlocks can be invaluable for solving many of the puzzles and situations you encounter. Characters with diplomatic perks can, for example, calm down hostile native and scientists can get more rewards from natural phenomena. So usually you’ll want to have a well-rounded party that complements your play style.

Central to the game experience is the concept of moods. In both battle and events, you can choose actions that vary between being friendly, deceptive or aggressive. Going with one thing often enough builds you a reputation, which in turn colors how future events might turn out. Go to a friendly place in Sub-Saharan Africa with a reputation for friendliness and you just might get rewards without the need for battle or rolls. If you’ve got the wrong kind of reputation, however, things can escalate quickly. 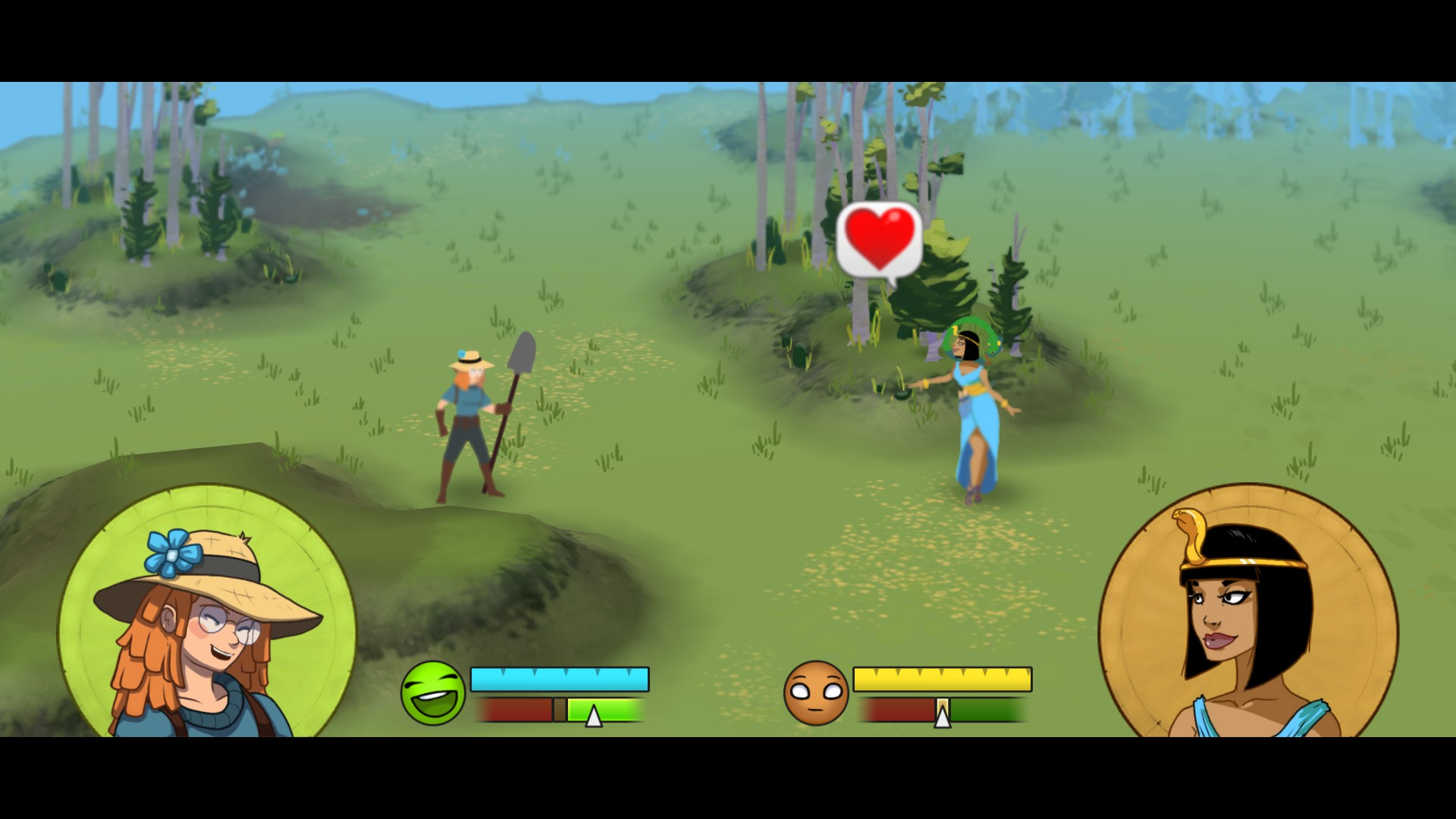 This is tied into the somewhat different battle system. All characters start with the three types of standard actions—friendly, aggressive and deceptive. Using one type over the other can change the mood in battle. For example, if your party is aggressive when the opponent is taunting you, you are considered to have risen to the bait and take a little more damage from attacks. It’s the kind of system that sounds complicated but really isn’t once you’re in-game. There’s tooltips and a helpful bar at top that tells you what mood it is and what it would take for it to change to something else. Depending on your equipment, bonuses you may have unlocked from artifacts of skills and your individual characters’ mood you may deal more damage or get more rewards if you fight with a certain type of emotion.

This rock-paper-scissors kind of system works well enough but does not make up for the glaring fundamental flaws in the combat overall. The battles are turn based and based on hexes, pitting you against an enemy force of varying number. The main problem is, that it’s all too random. The terrain, positioning of your characters and enemies is determined at the beginning of the fight. This often means that the right or wrong kind of terrain and choke points around your initial spawn area can make or break some of the tougher fights in the game. This isn’t good design in my opinion, not being to control the initial formation and when you first trade blows with the enemy is an unforgivable sin if you're going to have tactical battles.

This doesn’t even take into account the very limited secondary and support skills that your characters can learn. Friendly moves usually double as healing but things like area of denial attacks or things that control the movement or attack order are altogether too rare. As your party is limited to three characters that you can never swap out, some encounters become nigh-on impossible to beat with some configurations or, even, if the enemies spawn too close to you. It’s needless frustration to take away player agency like that and this is something that mars what would otherwise be an interesting and different take on combat.

With all of that said, the majority of the game isn’t spent in battle. Instead, most of your interactions will be on the various expeditions. The aim of these is to gain treasure and tokens which can then be exchanged on the world map for different kinds of rewards. It’s an experience somewhat similar to a dungeon crawler; instead of rooms you go from point to point, finding goodies and potentially resolving situations before getting to a final area with an artifact and boss. There’s things to keep an eye on such as your food supplies and your resolve but other than that you’re free to explore as you please.

The game is lighthearted and offers a good amount of humor and cutesy moments when discovering things. It keeps things from being tedious and even when I couldn’t discover everything that I could because of a bad spin of the outcome wheel I was generally amused with the results I got. It’s a game that encourages playing through with different character types and with different play styles so that you can find everything and learn all the mysteries of the land. This is underscored by the unlocking of campfire stories as you play with different characters, which can give you different bonuses once per expedition. It's the same with the various treasures and artifacts you recover: it's fun to see what abilities they can add to your arsenal on top of the score bonuses you get. 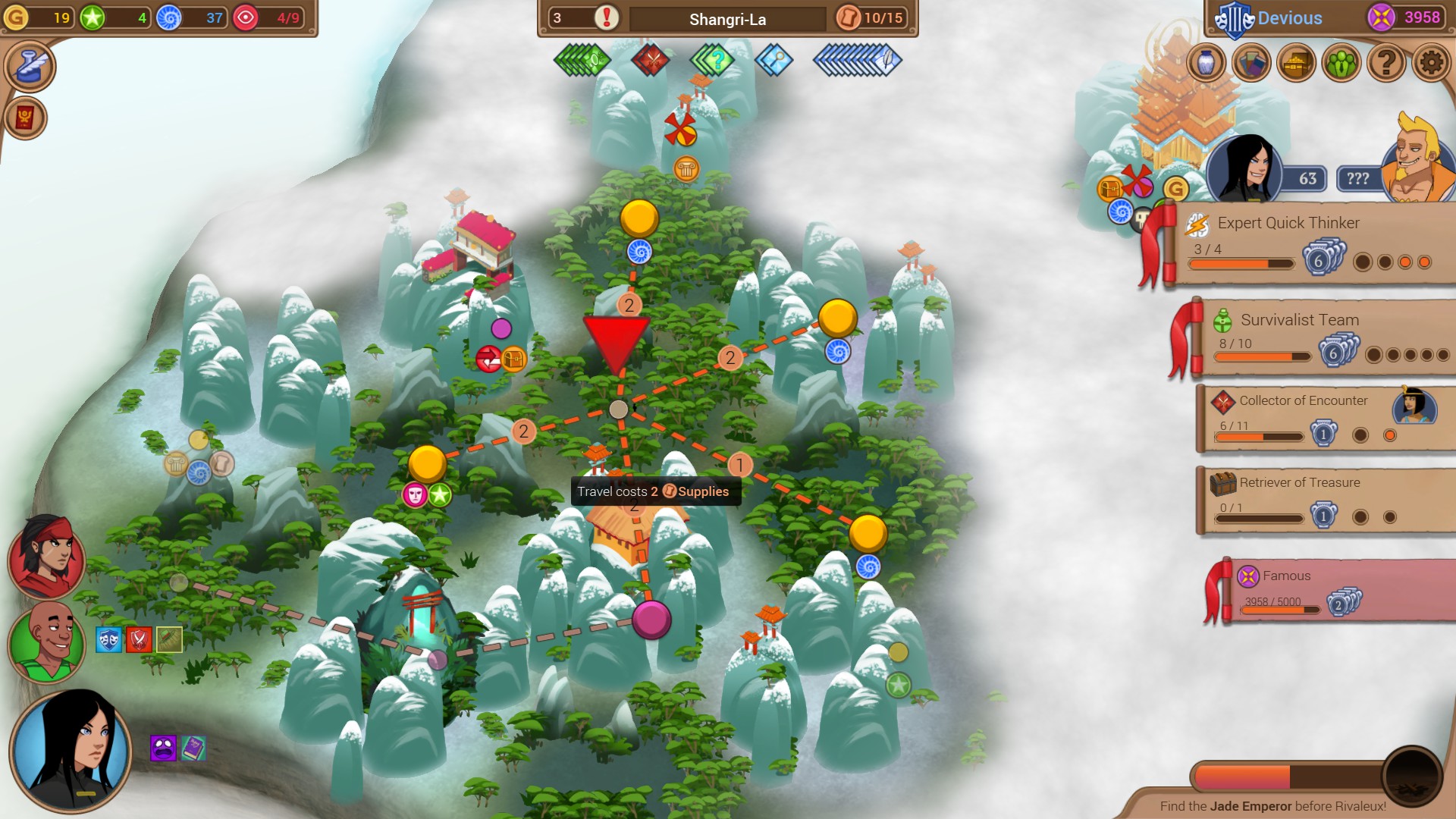 The ultimate objective in the base game is to beat your explorer rival with sufficient score. This score is computed by the number of treasures you get and discoveries you make all summed up at the end of each expedition. In the expansion, The Emperor’s Challenge, things are slightly different, with the goal still being to beat your rival but broken down into more bite-sized chunks. The emperor of China awards porcelain vases for completing specific actions to whichever team fulfills the conditions first. Sometimes you’re given an award for damaging 3 enemies at once and sometimes you get rewards for having a high level of survivalist skills in your characters. These gradual and small awards are much more engaging than the standard game mode. As the expansion adds a new expedition but also allows you to go on all the old ones, perhaps it’s fair to say that it supersedes the vanilla experience.

This is a challenging game regardless of its appearance. But it’s not a difficulty that I feel is rewarding. Unlike games like Darkest Dungeon, the more challenging tactical battles are the bad kind of unfair. I beat the game once in Classic mode but then dialed down the difficulty in most other playthroughs because of just how tedious these encounters were. Without being able to make enough meaningful decisions in the tactical phase, there’s really no point to subjecting yourself to that kind of punishment. Most mistakes are not forgiven and the game does not let you adapt your party to changing circumstances—you’re stuck with your three characters and whatever abilities you picked when leveling up forever. Items you can buy on the world map help, but not enough. When you already have to prioritize between aiming for more money for equipment or research for passive abilities, there’s no real way of coming out on top because you seldom can have enough of both.

On the technical side of things, there’s only a single glaring annoyance: on my dual monitor setup the game would always spawn between my two screens no matter what. Maybe it’s due to my window manager (AwesomeWM) but it’s still something worth pointing out.

I sunk about 20 hours to the game and, when I wasn’t being let down by the combat, I generally enjoyed myself. I think that there’s a lot of good ideas in the game and, certainly, a lot of love put into it. There’s been a fair amount of updates with free content and things for your explorers to discover since launch and the expansion offers a plainly better game mode. There’s still a lot for me to see and I’d love to explore it all, with all the different types of parties and amusing quirks and personalities. If you're the type that likes to see how different situations can play out or how different sort of artifacts can entirely change your experience, then it’s easy to lose the track of time when playing. If nothing else, the weak parts of the game made me appreciate the clever design of the good even more. Article taken from GamingOnLinux.com.
Tags: Adventure, GOG, Review, Rogue-lite, Steam, Strategy | Apps: Renowned Explorers: International Society, Renowned Explorers: The Emperor's Challenge
5 Likes
Share

View PC info
I agree, this was a pretty fun game. I played it through a few times to take different paths. Yes, the combat is a little annoying from time to time, but can be fun too. I sank about 10 hours into the game, but I don't spend much time in most games, so that shouldn't mean much from me. Actually, the fact that it kept me in the game for 10 hours says quite a bit. :)
0 Likes
While you're here, please consider supporting GamingOnLinux on: