Some thoughts on the Cities: Skylines - Concerts mini-expansion

I was sent over a copy of Cities: Skylines - Concerts [Steam] so I’ve given it a look. Here’s my thoughts on this mini-expansion. 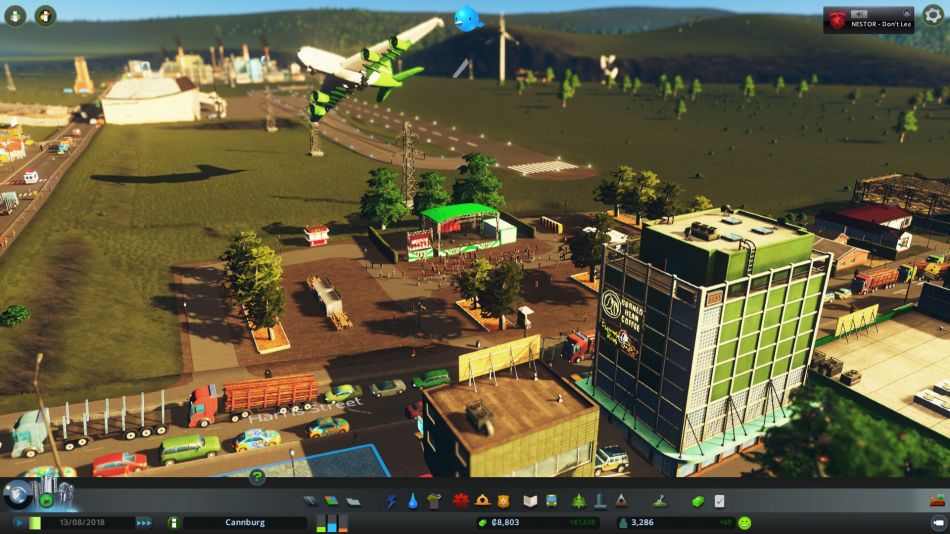 There's a new radio station, a festival area, festival policies and a hat for that annoyingly little rip of Twitter that sits at the top. That about sums it up really!

Festivals might look cool, but they really don’t add all that much to the overall experience. A minor distraction maybe, but there’s just not a lot of anything on offer here, besides the excellent new radio station that comes with it. The music files are in available in .ogg format too, so you can take them out of your Steam folder for the game and play them whenever you want. While the music is fantastic, it's not going to be enough for most people to pay out for it.

Who honestly gives a crap what hat little Chirper wears? Come on. It seems they've removed mention of that since the initial press info too, I guess not many other people care about that either.

Part of the problem, is that the actual concerts end up being quite a while between each other. So you don’t even get to see them all that often, making them largely unseen. Unless you’re powering through on the fastest possible speed, it will be a long wait to see them quite often. Once you've seen them in action,

Their Steam description of it oversells it a bit in my opinion:

With Concerts, putting on a great show is about more than just the music. From new buildings to host your headliners to festival management options that encourage ticket sales, creating advertising campaigns, driving band popularity, optimizing security budgets and more, Concerts puts players in control of everything from the front of house to backstage.

I’ve put my own emphasis on that bit, since it actually only includes one new building, but the way they describe it makes it seem like there’s more. A small error, but accurate descriptions are very important.

If they had a few different types of new music-themed buildings, then this could have been something. Build a few high-profile music venues, a festival area and so on. There’s so many things they could have done with this!

The DLC hasn’t been received very well by players and while I’m not surprised, I think people have been overly harsh on it. Personally, I thought it was worth it for the new music alone.

I’m looking forward to their next proper expansion, Cities: Skylines - Green Cities, since that should add plenty that makes the actual gameplay more interesting. That actually has me quite excited!

Article taken from GamingOnLinux.com.
Tags: DLC, Simulation, Steam
1 Likes, Who?
We do often include affiliate links to earn us some pennies. We are currently affiliated with GOG, Humble Store and Paradox Interactive. See more here.
About the author - Liam Dawe

I just had a quick look, and apparently there's mods to disable that thing. Thank goodness. I can't remember it serving as anything other than an annoyance.
1 Likes, Who?

View PC info
I love this game, but calling this an expansion (mini or otherwise) is a bit of a stretch, and it doesn't help that it costs money. IMHO this feature should have been free just as the Stadium one, since the functionality seem alike. Sure it's a business, but I'm not interested in paying 7€ for this, and to be honest the Green Cities expansion doesn't seem that substantial to me either gameplay wise, atleast compared to Mass Transit. New (official) buildings are always cool, but the "strategy" of minimizing pollution is negated by the Eden Project monument.

That is actually one of my biggest issues with CS, that most of the "end-game" monuments changes the balance in your city in weird ways (one example: the Medical Center eliminates all sickness even though it has a patient capacity of 1000, and has 50 ambulances that are never used), and they feel generally broken and not well thought out. I will gladly pay for an expansion that only focuses on balancing, and I'm honestly turned off of the direction of practically cosmetic only expansions..

Jajcus 6 Sep, 2017
View PC info
I really hoped it would be a game in a game, some kind of 'Festival Tycoon'. Base game already provides the logistics simulation, which is an important part of such endeavour, just add a few festival-specific buildings, some metrics on them to tune and we have a great game. But just one building? Disappointing and not interesting (at this price).
0 Likes
ChiKin 13 Sep, 2017
View PC info
Well, it could have been cool maybe if...

You could build a music studio in your city, and add a fame walk pavement that gets stamped with your platinum musicians, maybe a musical institute that increases the number of musicians in your city, policies like "city funded buskers" and "music scholarships". It would be cool to see the little buskers on the sidewalks of the city.

Increased tourism if your city succeeds at becoming a cultural hub, which by the way should be a new milestone you can reach if your city makes 100 platinum records, and then you can build a rock and roll museum or something. Lots of fun things you can do with this!
1 Likes, Who?