Stellar Interface [Steam, itch.io] is a rather crazy looking space shooter with a randomly-generated galaxy, it recently gained an Endless Mode too. This is one from my list of "games that got buried", it was previously in Early Access and it's been updated rather a lot.

I'm a little unclear on when it released exactly, as they put November 21st 2017 on Steam, but I can't find an actual "release" announcement for when it actually left Early Access. They had a "1.0.0.0" release on November 21st 2016 and they announced an "Anniversary Update" on November 21st 2017. I'm going to assume the actual date on Steam has the year wrong…

Anyway, take a look at the trailer for the new mode: 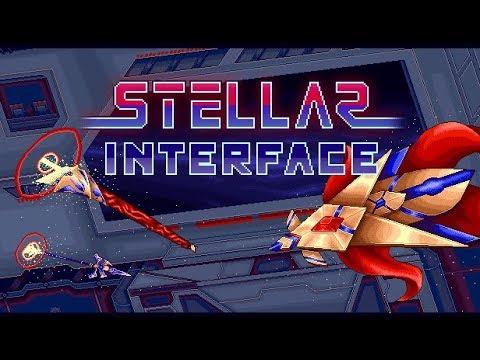 It looks absolutely nuts, love it! Visually and in terms of the action, it actually reminds me of Zero Wing from the Sega Meagdrive that I put endless hours into when I was younger.

Run through the universe, discover the numerous perks/consumables and their synergistic effects. Explore the randomly-generated galaxy to find merchants, unlock spacecrafts, collect StellarNetES Cartridges, checkmark your kills of the various galactic overlords.

Can you find the most outrageous perk combination to defeat the Last Overlord?

We do often include affiliate links to earn us some pennies. We are currently affiliated with GOG and Humble Store. See more here.
About the author - Liam Dawe
I am the owner of GamingOnLinux. After discovering Linux back in the days of Mandrake in 2003, I constantly came back to check on the progress of Linux until Ubuntu appeared on the scene and it helped me to really love it. You can reach me easily by emailing GamingOnLinux directly.
See more from me
Some you may have missed, popular articles from the last month:
The comments on this article are closed.
3 comments
DVDPT 4 Jan, 2018
Hi, Dev here ;)
The game was released in early access on September 9, 2016, and fully released on 21 November 2016, you can find the launch ""announcement"" on steam.
Thanks for sharing the game any feedback and suggestions are welcomed ;)
PS: We have a Discord channel for the players, feel free to join ;)
1 Likes, Who?

Quoting: DVDPTHi, Dev here ;)
The game was released in early access on September 9, 2016, and fully released on 21 November 2016, you can find the launch ""announcement"" on steam.
Thanks for sharing the game any feedback and suggestions are welcomed ;)
PS: We have a Discord channel for the players, feel free to join ;)

Thanks for confirming, so I was right that the Steam release date:

Is actually wrong :)
0 Likes
DVDPT 4 Jan, 2018
Yup, don't know what happen in there, the date just changed itself
0 Likes
While you're here, please consider supporting GamingOnLinux on: