Starship Titanic, a classic adventure game from 1998 is now on Linux

Starship Titanic, an adventure game from 1998 about the most beautiful starship ever that's inhabited by a crew of malfunctioning robots is now on Linux. 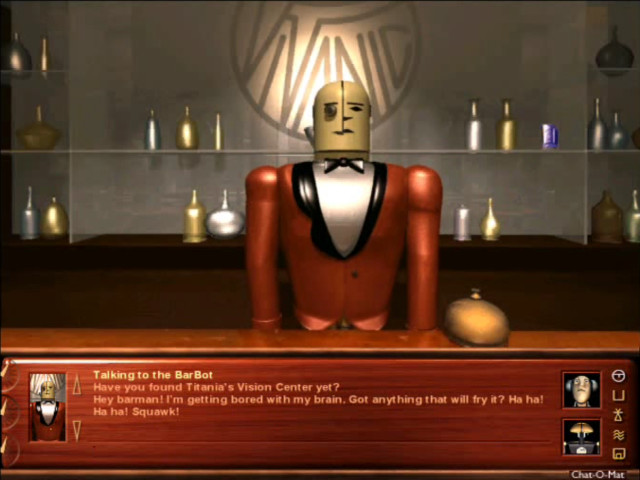 In an update posted on Steam yesterday, one of the people from Nightdive Studios noted that the game has been rebuilt to use ScummVM, which itself was recently updated to support Starship Titanic (amongst other titles). It's pleasing to see that Nightdive have now made this official with a Linux build directly on Steam. They even enabled Steam Cloud support, so you can take your saved game with you to other machines.

Hopefully the Linux build will also make its way to GOG!

At the heart of our Galaxy, an advanced civilization of which we know nothing had built the biggest, most beautiful starship ever, the Starship Titanic. Majestic and luxurious, its interior resembles a mixture of the Ritz, the Chrysler building, Tutankhamen's tomb and Venice. Starship Titanic is a technological marvel. And it cannot possibly go wrong.

In theory. Seconds into its maiden voyage it crashes into hyperspace, vanishes... and collides with your house.

Bewildered, you find your way aboard, and just as you are gazing at its awe-inspiring interior, the ship takes off again and heads deep into space. You are stranded. But you are not alone...

I remember seeing it in shops, but I never played it myself. I was only around 10 when it was originally released though…hopefully some of you will enjoy a run down memory lane.

View PC info
Super charming. It amuses me how what once needed to be prerendered can now be done in real-time, several times over. Is this anything like The Ship: Murder Party?
0 Likes

What you don't mention is that it was written by Douglas Adams. Since I used an Amiga as my daily driver until 2005 when I switched to Linux, it's the only... er, thing by Adams that I've never experienced. At least, not properly. There was a novelisation, but it was actually written by Terry Jones of Monty Python fame, who did some of the voice acting in the game.

All that said, I've heard that, a bit like Adams's Infocom adventures from the '80s, it's not really all that good. But hey... it's still Adams.

Quoting: DuncWhat you don't mention is that it was written by Douglas Adams.

Quoting: DuncAll that said, I've heard that, a bit like Adams's Infocom adventures from the '80s, it's not really all that good. But hey... it's still Adams.

I remember having had sort of a love hate relationship with the game. When seem and heard over and over again, the voices and animation got on my nerves. But I think I played through it.
0 Likes

View PC info
Wow, let's celebrate proprietary client-software with saving on someone else's computer! Better building ScummVM from source-code with "free as in freedom" and disabling support for network / cloud. :-)
2 Likes, Who?

Steam is the only cloud service I'm using. It's just very useful for me (as I sometimes have to use another computer for gaming) and I consider how far I got into a game (and when) less secret than, say, what I'm posting here. And you can still use the game bought with the ScummVM of your liking and building if you so desire.

Uhh. Okay. Buy it from GOG then, without Linux support? No optional cloud saves involved then. And I guess ScummVM is evil too, unless you build from source.
3 Likes, Who?

Ardje 18 Jan, 2018
View PC info
Wow... does anybody have to think about Kylie Minogue with David Tennant, saving the starship titanic? (Dr. Who christmas version)
1 Likes, Who?

Cloud saves is optional. And even when enabled, it only makes a cloud backup of your local save. But whatever - you keep doing you.

You don't need to wait Gog release the Linux version to buy the game: you can download ScummVM v 2.0 here:
https://www.scummvm.org/downloads/
then add the directory where you stored the game data.

Mountain Man 18 Jan, 2018
View PC info
I love Douglas Adams, but this game is waste of his talents, and your money.
0 Likes
1/2»
While you're here, please consider supporting GamingOnLinux on: