Steam continues to get bigger, with another record breaking concurrent user count at 17.6 million

This is pretty insane, Steam has broken another record for their concurrent user count hitting over 17.6 million. It was only in January that Steam passed 14 million concurrent users, so this is a pretty big growth.

Not only did they hit that allmighty figure, they also recorded 6.8 million users actually in-game, so not just people with Steam sat open doing nothing. 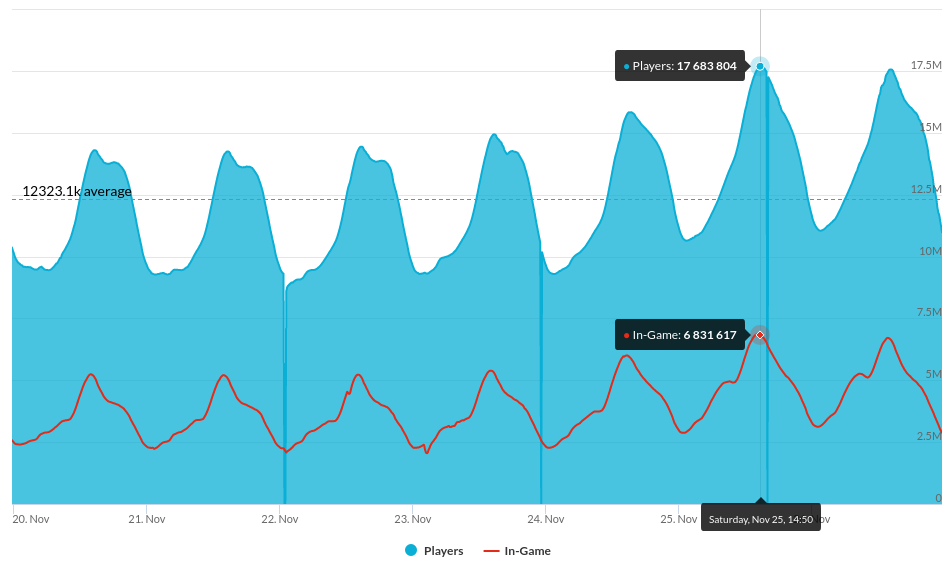 The thing is, it isn't just the sales driving this. It helps of course, as everyone scrambles to splurge the cash on the latest games, or whatever's been sat in their wishlist. On a day like today Steam is still sitting at around 12.3 million users, which is still extremely high considering the previous record.

I have no doubts that PLAYERUNKNOWN'S BATTLEGROUNDS is driving quite a bit of this, since it hit an all-time peak player count of 2.9 million around the same time. Honestly, if PUBG was on Linux, I would be playing it too. This is again a part of the reason why the Linux market-share on Steam has gone down (remember though, it doesn't actually mean less Linux gamers!), due to such popular games not supporting Linux and Steam's growth in markets where Linux isn't currently popular.

Now, just imagine how much money Valve is likely dealing with. Not just how much they're making, but how much passes through their systems every day—crazy! It shows how big a grip Valve holds on the PC gaming market and how far they could push Linux gaming in future once drivers have come further along, once VR support is better and so on.

thats if the 0.32% from the Hardware Survey is correct
3 Likes, Who?

thats if the 0.32% from the Hardware Survey is correct

I would think the amount of linux users to be (always) online to be higher relative to windows users, for obvious reasons. So also the total online numbers relative to the 0.32%.
The amount of ingame, I don't know...
Anyway: I am now 48/7 online with a steam machine and a gpd win :-).

thats if the 0.32% from the Hardware Survey is correct

I don't think the numbers as they are right now are to be trusted, considering the huge drop since PUBG/China growth, meaning the numbers are pretty skewed right now in favour of Windows.

It's usually reasonably correct, but now not so much due to this.
0 Likes

View PC info
yeah those were just calculations from the numbers above.
there's always variety. there might be more linux users online in different times also. And yeah linux users are more likely to not close their PC :) so steam is running all the time.

Anyway i think those numbers are quite good. Obviously not good enough for bigger publishers.
0 Likes

View PC info
It must happen one thing for the linux gamer base to grow:

A successful console. (The pc gaming on linux will be low for a long time yet)

A game like PUBG, and the top 40 more played games in Steam could be the answer. Maybe.

Who already has a Linux console? Valve.

What should they do to push forward their console? Make deals with publishers and/or developers of the top 40 list to port those games to the console. And advertise it.

Valve itself must do this. It will not happen miraculously.

What should they do to push forward their console? Make deals with publishers and/or developers of the top 40 list to port those games to the console. And advertise it.

Valve itself must do this. It will not happen miraculously.


I think the stance of Valve is clear: they want to meddle as little as possible with the market.
They are willing to promote other peoples steam machine through their site.
They are even willing to develop the software and research the hardware.
But even then: the Vive is from HTC, not from Valve. Researched, developed and designed by Valve, but mass produced and sold by HTC.
They probably took matters into their own hands for the link and the steam controller, as it is hard to push to others without loosing quality.

View PC info
I don't believe a Linux console is a solution for Linux gamers. I don't know about you, but around me, me included, all Linux users are doing much more than playing, on their PC.

It's a workstation for video, music, 3D, development, internet, social media door, games, all together, and if there was a Linux console, they would NOT buy it or use it even for free. It would require a split between the PC and the console, while with the PC they have all in one machine.
3 Likes, Who?


Interesting that that number is about the same as the number of members of the r/linux_gaming subreddit.
0 Likes


Interesting that that number is about the same as the number of members of the r/linux_gaming subreddit.

I doubt the two are related at all. I rarely turn off my machine and leave steam on in the background. I don't even have a reddit account let alone subscribe to one of their subs.

Many people I know involved with linux and open source are privacy minded. Many also don't care for any form of DRM. But, while the two topics are loosely related, everyone has their differences. Think of all the people on this site that only are interested in gaming through GOG because of DRM. All I am saying is that there are so many differences that I am sure those numbers are not correlated in the least.

That being said, with 17m online at once, I wonder just how many users they have total.
0 Likes
1/2»
While you're here, please consider supporting GamingOnLinux on: