While there's a lot of good games available natively for Linux, one area we really are lacking in is games for a younger audience. Steam Play has helped a lot here!

There are games suitable for a family on Linux of course, the problem is most of them aren't really recognizable. We don't have some of the big names, which is true of Linux gaming overall but for kids games it's especially bad. On a whim, I decided to try out LEGO Jurassic World with my LEGO mad mini-me today and I came away incredibly impressed with it. 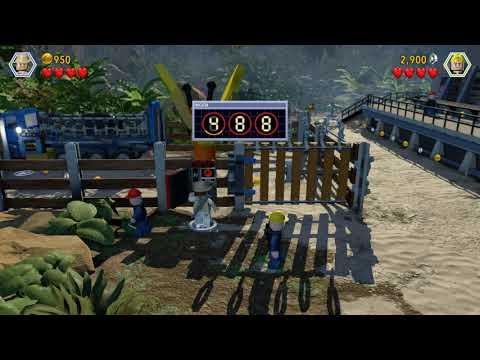 For me, the option of Steam Play is there to compliment native Linux ports and not to replace them. Since this is old (2015) and likely to never come to Linux officially, it fits in nicely for how I want to use Steam Play.

The Steam Controller and the Logitech F310 together worked great. We did have an issue where the second pad suddenly didn't work, a quick swap hot-swap later and it was fine again. You pick up a pad, plug it in and away you go—exactly how easy gaming should be.

The only other issue encountered was with it refusing to set 1080p as the screen resolution, strangely it always reverted back to 720p. I'm assuming this is Wine's multi-screen handling messing up, as it happens in others too. Many native Linux games have terrible multi-screen resolution handling, so I'm very used to the quirks. A quick fix is to edit the config file found here:

It's literally a 1 minute fix to edit the resolution numbers. A similar thing I end up doing for a lot of native games.

Not a Linux-specific issue: Some of the audio is quite low quality (true on all platforms for it), since it's cutting audio from a rather old film now for some scenes. It's noticeable but not too distracting.

Other than that, it's actually pretty amusing. I always love seeing how games translate from movies and the LEGO game series seem to do it quite well. There's something very therapeutic about smashing LEGO stuff apart and not having to deal with the aftermath. The nostalgia factor is high with this one, even with the famous "It’s a UNIX system! I know this!" quote.

Following the epic storylines of Jurassic Park, The Lost World: Jurassic Park and Jurassic Park III, as well as the highly anticipated Jurassic World, LEGO Jurassic World™ is the first videogame where players will be able to relive and experience all four Jurassic films. Reimagined in LEGO form and told in TT Games’ signature classic LEGO humor, the thrilling adventure recreates unforgettable scenes and action sequences from the films, allowing fans to play through key moments and giving them the opportunity to fully explore the expansive grounds of Isla Nublar and Isla Sorna.

You can find LEGO Jurassic World on Steam, it's 75% off in the Steam Winter Sale too so it's really cheap to try it out. For a bit of family fun and a test of Steam Play, it's worth a look.

View PC info
I remember my young nephew was extremely disappointed after getting this game as a gift and then bumping into a game breaking bug quite a bit into the game. Something to do with hang gliders or parachutes if I remember correctly. He played on Windows of course, and quite a while ago. Hopefully that has either been fixed or doesn't trigger on Proton or your hardware.
1 Likes, Who?

Quoting: tuubiI remember my young nephew was extremely disappointed after getting this game as a gift and then bumping into a game breaking bug quite a bit into the game. Something to do with hang gliders or parachutes if I remember correctly. He played on Windows of course, and quite a while ago. Hopefully that has either been fixed or doesn't trigger on Proton or your hardware.

I looked it up a little first and so far we've not hit a single bug users have mentioned from Windows on Linux. Seen quite a number of people saying it crashed a lot, we put many multiple hours into it and it's been lovely.

View PC info
I have to agree with this. As a massive lego fan and two kids that love lego, the lego games are great.
We have a Wii but they stopped making games for that.

When Proton was 1st released I went and grabbed Lego:Incredibles but there were some real big issues with it and Proton (sound and glitch).

The recent beta's ( 3.16-5 onwards) pretty much solved this. The Xaudio merge was a major fix for sound as the lego games moved to xaudio from around 2009. Likewise further improvements have fixed the glitches

At the moment we are working our way through Incredibles & StarWars TFA before jumping into Hobbit (recently got for free!!!) and then Jurassic world
2 Likes, Who?

Bummer.
3 Likes, Who?
Purple Library Guy 22 Dec, 2018
But what about all the hardcore children complaining that the frame rate is slower on Linux?!
7 Likes, Who?

View PC info
You should give it a go for Lego Lotr also Liam. That is a really funny experience.

Quoting: LeopardYou should give it a go for Lego Lotr also Liam. That is a really funny experience.

No spoilers! that was the last lego game my family were able to play (last one released for the Wii) and it friggen glitched and we couldn't get further than the stairs of Cirith Ungol .
0 Likes

pb 22 Dec, 2018
I recommend trying out LEGO City Undercover. It worked since the initial release of proton but the sound was glitched (background effects were at full volume without the way to change it). Since proton 3.16-5 the sound is fixed and the game is perfectly playable, my kids are 65h in, with 95% completion. It crashes occasionally but judging by the reviews, it's typical to Windows as well, maybe even more so.
1 Likes, Who?
stormtux 22 Dec, 2018

Have someone else had a problem like this? Is there a cleaner way to solve the problem?
0 Likes

Have someone else had a problem like this? Is there a cleaner way to solve the problem?

You need to make sure both controllers are on before you launch the game, then it is just a case of pressing the > to the right of the steam button
1 Likes, Who?
1/3»
While you're here, please consider supporting GamingOnLinux on: