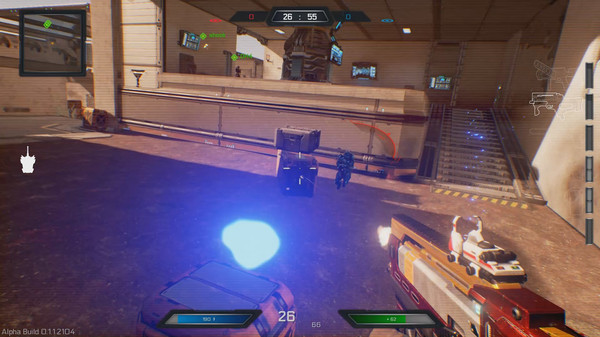 Storm United is easily one of my favourite up and coming FPS games, it needs more players so get going people.

In this latest patch they have fixed the annoying issue for Linux gamers not being able to connect to larger maps, as well as optimizing the Linux version to reduce a bunch of stutter it had. Full patch notes available here.

It's easily one of the most beautiful FPS games on Linux, the developers are pretty responsive now too and seem to be taking better care of the Linux version too.

If you have been able to try the latest version, be sure to tell us how much better it is! Personally, I'm still annoyed at how slow as hell it is to load.

It can be pretty hit and miss with the servers at times too, the game doesn't seem to gracefully time-out if it cannot connect. If you think a loading screen to get into a server is taking too long, you will need to force quit the game. They really need to improve little things like that before adding more new content I think.

View PC info
i dont see the difference... but maps seem to load fine now, the ones that crashed before.

i didnt have stuttering previously also with __GL_THREADED_OPTIMIZATIONS=1 %command% -opengl4

only at the start of the map..and this is still there..but its smooth after this.

Storm United is a somewhat CPU intensive game (As are all Unreal Engine 4 games including Ark.)

Eg: My i7-940 is the source of my frame-rate issues drop when paired with my GTX 970. (I turn down post-processing to get a better frame-rate in Ark on my girl's GTX 970 and Skylake it boosted FPS from 30 to 55ish)

I was able to coordinate with a Storm Unitd dev live in game before the update and I think there was some server settings too that effected FPS or perhaps the server has the ability to set settings on clients and he remotely set settings on my machine.

Anyways, All Classes in this new update now have Knives, which I like.

I'm not experiencing the load time issues that Liam is, this update probably took a good 30% off Server Load Times and I haven't crashed yet.

Previously the crashes between maps were caused by the Voting System, and particle effects & performance differ from map to map as some maps are not optimized yet for Linux to the Nth degree.

When I upgrade to Skylake though I'm sure I'll be able to run Storm United at 4k at a decent FPS, I currently downscale to 1080p.

Checkout my Steam Controller Configuration - The Penguin - it's nice :)
0 Likes

Looks to be on the UE4 engine so should be fine, anyone clarify ?

View PC info
I'm only seeing two servers and those are empty with a very high ping. I want this game to be more popular!
0 Likes

View PC info
I went through the reviews list and added like 20+ friends so whenever I open the game people come on since they see a popup in their steam.
1 Likes, Who?

Quoting: ElectricPrismI went through the reviews list and added like 20+ friends so whenever I open the game people come on since they see a popup in their steam.

That is a remarkably good idea, sir.
0 Likes

Quoting: AnxiousInfusionAah, so it wasn't just my system being problematic afterall.

Storm United is a somewhat CPU intensive game (As are all Unreal Engine 4 games including Ark.)

Eg: My i7-940 is the source of my frame-rate issues drop when paired with my GTX 970. (I turn down post-processing to get a better frame-rate in Ark on my girl's GTX 970 and Skylake it boosted FPS from 30 to 55ish)


my AMD CPU is slower than yours by half and im getting 20 - 40fps on a single gtx760 @ 1440p with almost everything on the highest and a few judicial setting drops. It was 5 - 10fps ! but the threaded optimisations really work well with ARK. I try them out.

its a shame no steam machine will get these additions to current & older Unreal engine games :|

View PC info
Just bought a 4 pack, seen as it was on offer :D

I'll find out what its like on AMD GPU I guess