Storm United, The Great Looking UE4 FPS Is Finally Getting An Update 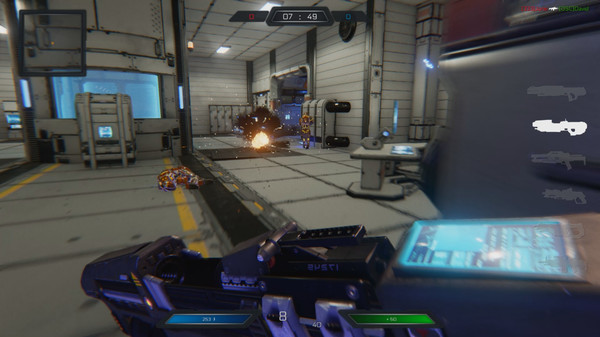 This weekend Storm United should finally have a new update, and the developers have told us it will include Linux too.

We've been left out in the cold a bit, as they haven't updated the Linux build recently so it's not in-sync with the Windows version. It's a shame, as it's already massively fun to play, and I can't wait to pick it up again.

@gamingonlinux Linux will get a huge version update with this next Storm United patch, coming this weekend! :) #linux #gaming

The developers also confirmed this on their official Steam forum:


QuoteThe new Angel and Hacker classes and having all OS back on the same version are some of the highlights of the new update.

You can see the full list of what's coming here, and it sounds delightful!

You can find Storm United on Steam. I highly suggest not buying it until the deliver this new update, or else you won't really be able to play with anyone. Article taken from GamingOnLinux.com.
Tags: Action, FPS, Steam
0 Likes
Share

View PC info
I had a clean out of games on steam which i don't play or don't work (still waiting for patches) or have not had an update in ages, that was 2 days ago and guess what one of the games i deleted/uninstalled was, Maybe i'll wait for the patch then re-install.
0 Likes

Quoting: TheReaperUKI had a clean out of games on steam which i don't play or don't work (still waiting for patches) or have not had an update in ages, that was 2 days ago and guess what one of the games i deleted/uninstalled was, Maybe i'll wait for the patch then re-install.

Ugh, that reminds me.. a bit off topic, but some of the games I have installed for the very reason that I check to see if updates have been done and hope things have been fixed... two off the top of my head I recently tried and failed to see the bugs fixed are 7 Days to Die and Ark. Both are still quite buggy.

I am not sure if I have Storm United, I may have to get it if they are releasing it for Linux.
0 Likes

View PC info
I've been following this game a while now and I sometimes play online.

When I play Storm It feels very Halo, CSS, and CoD-ish which is fantastic because I plan to play it on my Steam Controller. It's been a long time since I had my fix from Halo 3.

Definitely my #1 anticipated SteamOS FPS - however, they seem like they're holding the reigns back to really draw the public in and unleash the hype as the beta servers are a ghost-town and whatever master plan they have they're content to wait on as long as it takes for them to get development where they want it.

It is good to see them communicating their intentions and progress - good news or bad news. I hope to see success in their near future as a FTP FPS. And I guess I'll get some Early Access Loot which might be worth something someday if it's tradable/saleable.
1 Likes, Who?

We are especially excited to have our Linux users back on the same version so we can look forward to some matches together. We also plan to have the Steam Controller fully compatible with Storm United so that will be plenty fun to test in the future.

The "Quick Social Commands" are not fully developed yet so the entirety will not be included in the patch. We do wish to implement a call command for a heal and perhaps ammo, but is ultimately up to what you guys want to see for social commands in-game.

I'll continue to throw updates here until we get this update out :)

View PC info
Oooh the update is live. I hope the servers will at least be populated now.
0 Likes

We'll be looking to add a couple new servers soon so everyone has their ideal server to play on. We currently only have two dedicated servers, with one in Germany and the other in New York.

This is one of the known issues we're working on that came with the new update. You'll be able to connect, however it will take a few tries. Hoping to get a hotfix later this week to resolve most, if not all, of these issues.


Last edited by StormUnited on 13 October 2015 at 6:37 am UTC
0 Likes
While you're here, please consider supporting GamingOnLinux on: