Streets of Rogue [Steam] is such a fantastic mix of genres, I was quite sad when we reached the end of it recently. Thankfully, it's been updated recently with more content. 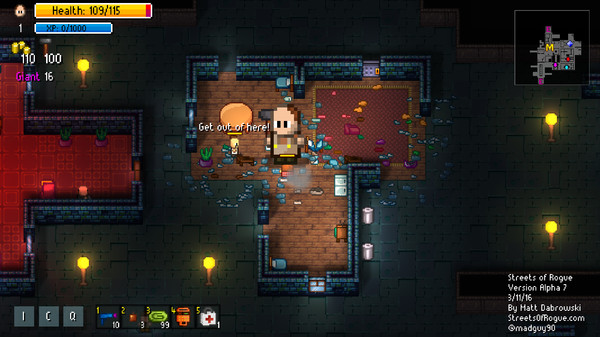 The developer has begun working on the next set of levels for you to progress through, with "Uptown" (level 5) now having the first two areas actually in the game. Of course, the new levels also come with a few new environments to keep the game feeling fresh as you progress through it. You can now find places like a Gated Community, Mansion, new Bank varieties, Police Outposts and more.

In terms of loading time, I didn't personally think it was too bad, but the developer has managed to reduce it down by around "40%-50%" in certain situations. They're not finished with optimising it, so we can expect it to be even snappier in future I'm sure.

You can also look forward to 16 new mutators to spice up the gameplay like: Exploding Bodies, No Cops, Infinite Ammo and plenty more. It's going to be fun to have a few more runs soon with all the variations you can have now.

The developer also fixed an issue I reported with the Twitch integration timer ending too soon—great!

One game that I have absolutely no problem telling you to go buy now, even with content not being finished it's an insane amount of fun. We've played it live on Twitch, sometimes with members of the community joining in and it's glorious fun.

Article taken from GamingOnLinux.com.
Tags: Action, Indie Game, Rogue-lite, RPG, Steam
4 Likes, Who?
We do often include affiliate links to earn us some pennies. We are currently affiliated with GOG, Humble Store and Paradox Interactive. See more here.
About the author - Liam Dawe