Sudden Strike 4 [GOG, Steam] continues to gain improvements to become a better game and the latest changes are welcome additions. 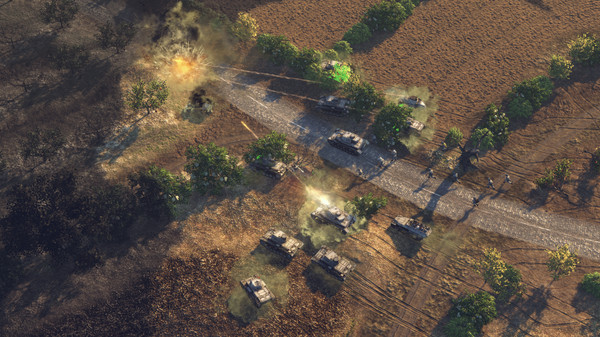 This latest update adds in a new French commander, with a brand new FCM 2C Heavy tank. He has his own army and unit set and you can use him in both singleplayer and multiplayer.

They've also enabled full 360° camera rotation, to get the best view of the action possible. I still find it strange that wasn't in it at release, but it is good to see such features being added. On top of that, they also implemented extended camera zoom to give you a better birds-eye view of what's going on, useful when combat is spread out quite a bit.

We also now have a new command available for infantry, you can tell them to scatter, which will prove extremely useful when they're under heavy fire.

I don't hold any hopes that they will get multiplayer working cross-platform, which is a shame. It's a good job the singleplayer is really good, otherwise I would be quite annoyed.

The post-release support this title has seen it pretty decent and if you're a fan of strategy games, I do think it's worth playing.

Article taken from GamingOnLinux.com.
Tags: GOG, Steam, Strategy
4 Likes, Who?
We do often include affiliate links to earn us some pennies. We are currently affiliated with GOG, Humble Store and Paradox Interactive. See more here.
About the author - Liam Dawe

gojul 12 Feb, 2018
View PC info
Honestly I found that game quite disappointing. The most irritating stuff was definitely the pathfinding which looks soooooo 90s era. Even AoE 2 did better on that point.
0 Likes

Plintslîcho 12 Feb, 2018
View PC info
The updated version of the game is not yet available at GOG.com. But full camera rotations sounds great! I'm really missing that in the game.

Sudden Strike 4 is one of my personal favourites of 2017. The graphics are amazing! My only gripe is the limited line of sight and that commanders and snipers are basically just as useful as any other infantry in this game.

Still I'm greatly enjoying this game and hope that the developers will add some more single player missions. I'm currently about to finish the last mission of the German campaign.
0 Likes

View PC info
Wait, this time its a native game (is it?) by a publisher who has full control over it's code base but still doesn't manage cross OS multiplayer?
0 Likes

PlintslîchoThe updated version of the game is not yet available at GOG.com.

Does the GOG version have the map editor? Does it work on Linux?

Can you get new skirmish maps outside of Steam for the GOG version?
0 Likes

devlandDoes the GOG version have the map editor? Does it work on Linux?

Can you get new skirmish maps outside of Steam for the GOG version?

a) Seems like the modding tools are not available for Linux, be it Steam or GOG.
b) There are a few websites from where to get mods outside of Steam.
c) Up until v1.07 (on GOG), the Linux version is missing the mods button the Windows one has (I don't know how is it on Steam).

About Mod tools: From what I saw in the devs tutorial videos, the modding tools are just a collection of Unity Editor files, you could download those files using the Windows Steam client and importing them using the Unity Linux editor, a hassle but could work.

Avehicle7887c) Up until v1.07 (on GOG), the Linux version is missing the mods button the Windows one has (I don't know how is it on Steam).

So, it's possible to now get new maps to play on the gog version, right? The few skirmish maps I saw it had was the only turn-off so far.
Thanks for taking the time to reply.