Sumoman, the hilarious UNIGINE-powered puzzle platformer with physics is now out on Linux

Sumoman [Steam] is a brand new and rather hilarious puzzle platformer powered by the UNIGINE engine. It released with day-1 Linux support and I took a look.

Disclosure: Key provided by the developer before the release.

The game is pretty damn funny thanks to the glorious use of physics. It's the simple things like timing a jump wrong and Sumoman falls flat on his face, to rewind time but just not rewind enough to end up doing it again and I really can't help but laugh at it. Take a look at some of my failures in the video below: 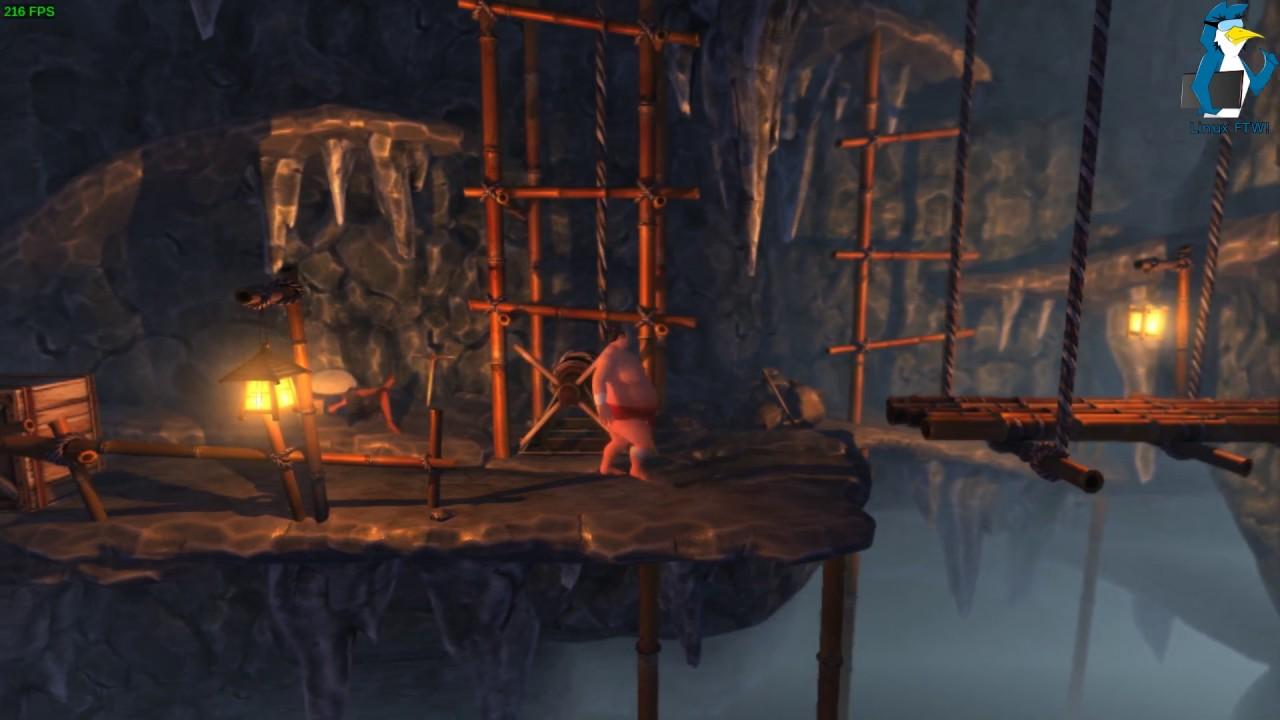 If you only looked at the game from the official trailer, you might have been left thinking it would have firmly sat in the crapware pile Steam has been growing, but the truth is I've had way more fun than I thought possible. It's a game that has a weird charm to it and it instantly hooked me with that. The mix of simple puzzles, some tricky platforming with a sprinkle of hilarious physics has actually made a pretty competent and surprisingly good looking platformer.

One part about the games controls does annoy me a lot though! You can only jump forward whilst you're moving. It has tripped me up plenty of times, as jumping without moving only allows you to jump upwards. So you will at times be forced to back track a few steps, just to make a simple jump. A little tuning of the controls to allow jumping forwards without moving and it would be solid.

Issues
The game does not play well with the Linux desktop. You cannot alt+tab at all and if you do the game will lose focus, forcing you to kill it from another TTY session (CTRL+ALT+F2).

OBS doesn't even show it when capturing the entire screen, so the game is doing something strange with the way it renders.

Thankfully it does have a windowed mode, which makes everything work fine. That's the only way I was able to capture a video of it.

Strange bugs aside, it's actually not bad at all. Tricky in places, damn funny at times and certainly something to take a look at if you need some dumb fun. Article taken from GamingOnLinux.com.
Tags: Platformer, Puzzle, Review, Steam, Video | Apps: Sumoman
1 Likes, Who?
We do often include affiliate links to earn us some pennies. We are currently affiliated with GOG, Humble Store and Paradox Interactive. See more here.
About the author - Liam Dawe

View PC info
This actually seems kind of neat? The stiff animation seemed bad at first but there's almost a unique charm to it. I imagine the average person will go "this game sucks, you just fall over all the time" but that's the whole point!

Unigine always had issues with Alt + Tab on Linux. It captures the X11 keyboard directly, just like screen lockers do. It also doesn't use SDL so you can't use a patched SDL to fix it. I imagine one could patch the X libraries directly but then you'd likely open a huge hole in your screen locker.
0 Likes

View PC info
I've had a lot of luck with just dropping down/over to another desktop (I use ctl+shift+arrow) instead of ALT+TAB, even with full screen like DiRT Rally or Civ6. Always worth a shot..

Definitely been there though, like with Vulkan up to about December; it would freeze on me where it took not just F2 but all the way out to like F7 before the SIG went through. It seems to have come a long ways since last year, but it used to lock the system hard if fps got too high (or maybe coincidence?)

Thanks for the video! It looks like a good casual or perhaps with friends/pass the controller type game.
0 Likes

PozzuoliI bought it, but it won't launch for me.

Your having more luck than me, just runs in the background.
Debian testing, Mesa/radeon.
1 Likes, Who?

PozzuoliI bought it, but it won't launch for me.

Your having more luck than me, just runs in the background.
Debian testing, Mesa/radeon.

Anything useful it you start steam, then on a separate workstation/desktop screen (same X session) launch the game (without > /dev/null) to see where it's getting stuck? Hope it's a quick fix : )
0 Likes

Pozzuoli 30 March 2017 at 5:20 am UTC
View PC info
I'm using KDE Plasma. There is nothing in the terminal when it freezes, although the dev just replied in the thread linked above. There's a log file at `~/.local/share/Steam/SteamApps/common/Sumoman/bin/game_log.html` that might be relevant. I'll run it again tonight and see what happens.
1 Likes, Who?

PozzuoliI'm using KDE Plasma. There is nothing in the terminal when it freezes, although the dev just replied in the thread linked above. There's a log file at `~/.local/share/Steam/SteamApps/common/Sumoman/bin/game_log.html` that might be relevant. I'll run it again tonight and see what happens.

Hah, great minds.. I actually have it ready to go tonight as well. I'll report back if I have any issues and what I am able to do to fix it (I've only refunded one game ever.. level one is sometimes getting to the main menu... and I feel like we should get a Steam achievement for that!) ;)
0 Likes

saildataI actually have it ready to go tonight as well.

Nice one! I did send them the log, but I don't think it was helpful (as per that thread). They suggested downgrading my Nvidia drivers, but that's not easy in Arch. Perhaps you could comment over in the Steam thread, so they know if affects more people? Cheers.
0 Likes

saildataI actually have it ready to go tonight as well.

Nice one! I did send them the log, but I don't think it was helpful (as per that thread). They suggested downgrading my Nvidia drivers, but that's not easy in Arch. Perhaps you could comment over in the Steam thread, so they know if affects more people? Cheers.

For sure. I haven't gone through my normal pre-flight checklist

e.g. checking the launcher script.. making sure all the libraries are linked.. but I'll get something out there within the hour so they have a better idea.

I'm also on Arch and agree; not a chance I'm downgrading the system because the game should have spent longer in beta.

That's like the gas station telling me to sell my car for one with lower fuel requirements if i say my car runs like crap using their premium blend..