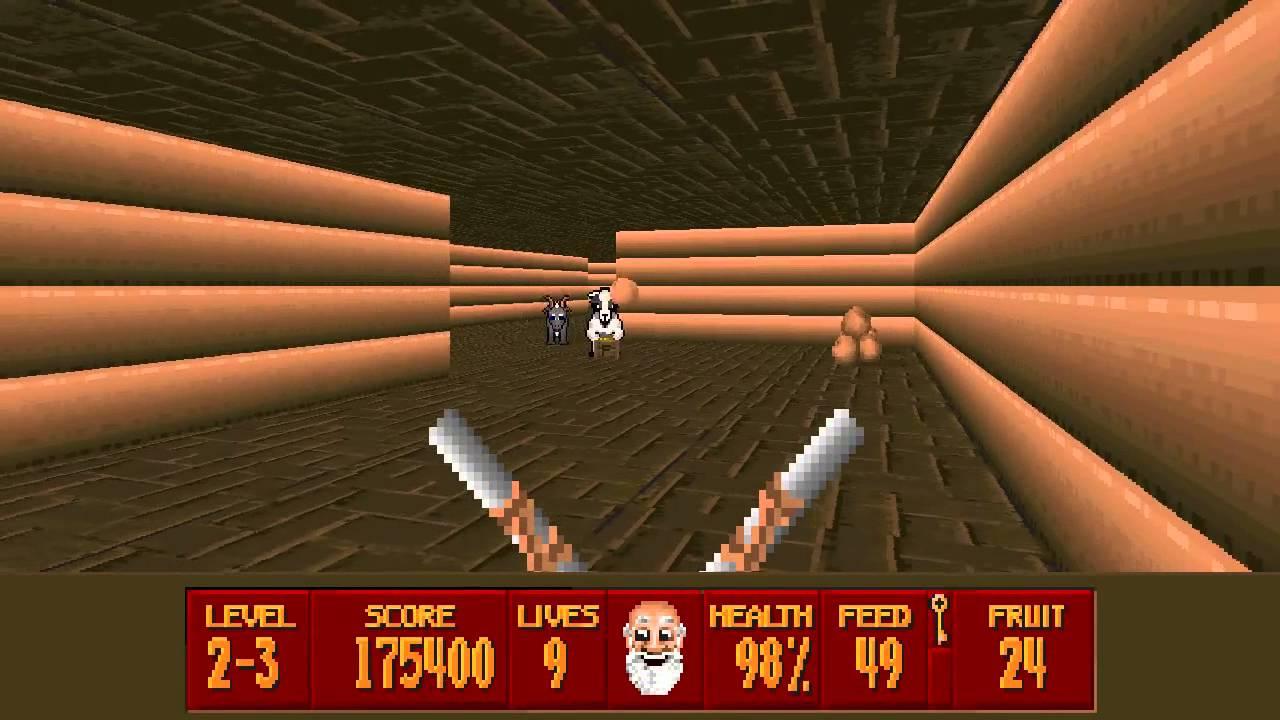 YouTube videos require cookies, you must accept their cookies to view. View cookie preferences.
Accept Cookies & Show   Direct Link
Super 3D Noah's Ark was originally a NES & DOS game that was revamped for a 20th anniversary edition, and the new version includes a Linux port with an open source engine.

Grab your bibles as this is a Christian-themed game, but it's really just non-violent version of Wolfenstein 3D. So, try not to read into the religious thing too much and take it as it is.

About
It's been a long journey. In just a few days, the ark doors will open and Noah, his family & the animals will be back on dry land. But the animals have become a bit restless and are out of their cages. Camels, giraffes, monkeys, kangaroos and more are wandering throughout the corridors of the ark. As Noah, it's your job to regain order & get the animals to sleep until you leave the ark. Your only tool to accomplish this is the food you brought aboard the ark. Can it be done? You bet! But how?

Probably a good game for a younger audience.

Thanks c704710 for letting us know. Article taken from GamingOnLinux.com.
Tags: Action, FPS, Itch.io
0 Likes
We do often include affiliate links to earn us some pennies. We are currently affiliated with GOG, Humble Store and Paradox Interactive. See more here.
About the author - Liam Dawe

I am the owner of GamingOnLinux. After discovering Linux back in the days of Mandrake in 2003, I constantly came back to check on the progress of Linux until Ubuntu appeared on the scene and it helped me to really love it. You can reach me easily by emailing GamingOnLinux directly.
See more from me
The comments on this article are closed.
7 comments
Guest 15 July 2014 at 1:41 pm UTC
What's with the bible based quiz questions every now and then?

Wolf3D was a childhood memory, so I get nostalgia when I play it; this on the other hand doesn't do anything for me.
0 Likes

Well that makes more sense: Only 11 animals were stuffed onto the ark.

View PC info
Nice, I will be purchasing this. I have wanted to play this game for most of my life but I never actually saw it anywhere. Im still trying to track down chex quest http://en.wikipedia.org/wiki/Chex_Quest
0 Likes
c704710 16 July 2014 at 4:28 pm UTC

edgleyWhat's with the bible based quiz questions every now and then?

Rather than a 'GOD Mode' cheat, players have a chance to win a health, ammo and score bonus for correct answers to the quiz. A unique aspect is this bonus is transferable, if your health is full, you get an increased ammo bonus 15% more than the regular ammo bonus. There's also a minor health bonus just for attempting to answer correctly.

Well, game play and level design as original as Wolf3D

Story is reused as well

But story implementation is certainly an original.
0 Likes