Super Rad Raygun, a love-letter to the Game Boy era of gaming, some thoughts

The developer of Super Rad Raygun [Steam, Official Site] sent in a key for me to check out their retro-inspired action platformer. We have a quite ridiculous amount of platformers now, so I was hoping that SRR would be able to stand by itself. As someone who owned the original Game Boy (anyone remember the Game Boy Printer?) the idea of this game excited me.

You play as “Rad”, a robot who looks very much like the original Game Boy case. It’s a nice throwback to something that has obviously inspired the developers quite heavily. It also gives a nod to Mega Man, since one of your arms is your weapon.

The game isn’t groundbreaking by any measure, it feels exactly like some games I personally played on the Game Boy when I was many years younger, which for me is not a selling point. If this game had come out way back then, it would probably have been a killer.

One really interesting feature the game has is the ability to change the colour palette.

Initially, you’re only able to use the standard Game Boy style colours: 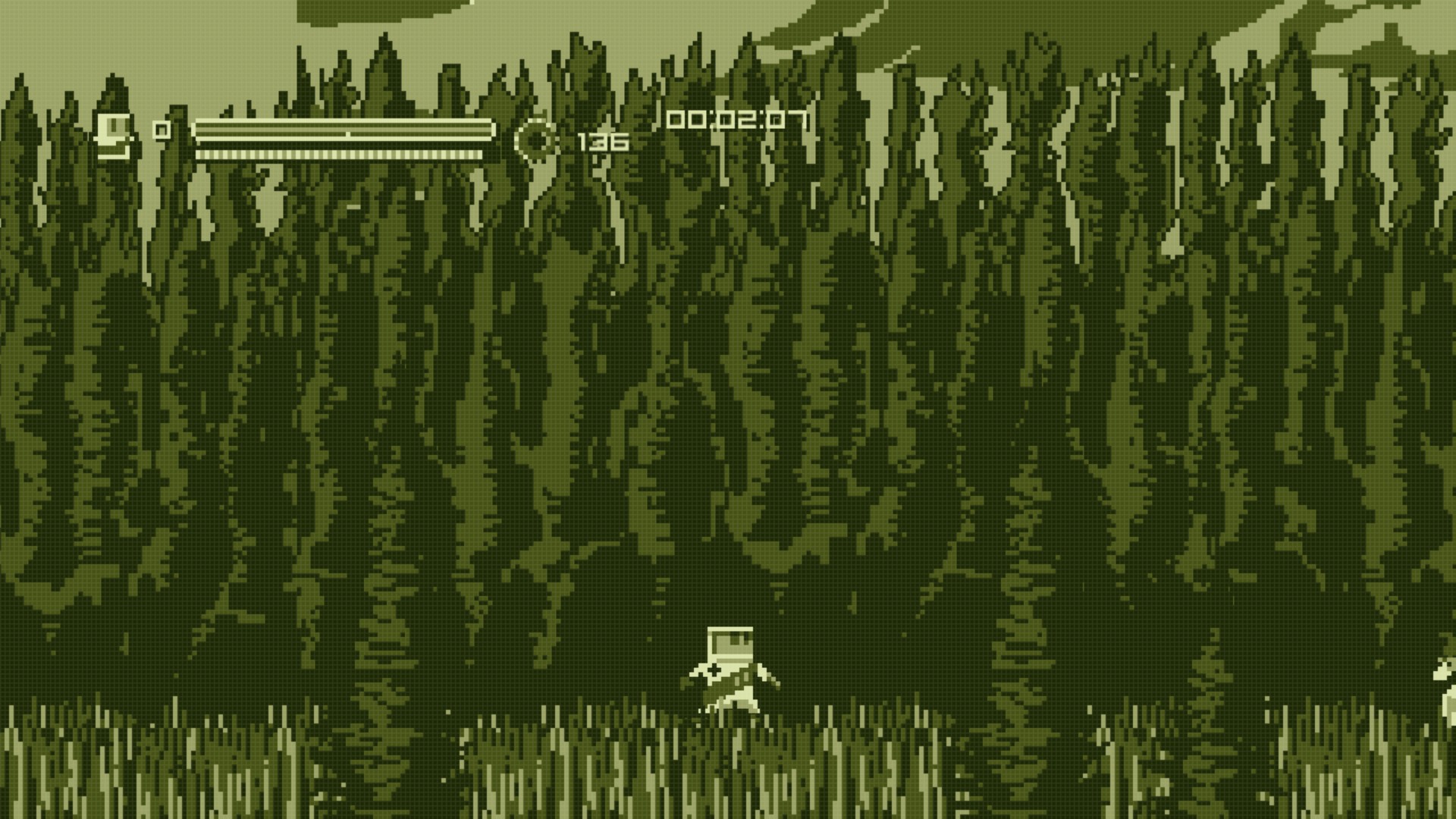 Once you finish the first level, you unlock “Rooster Teeth” which looks like this: 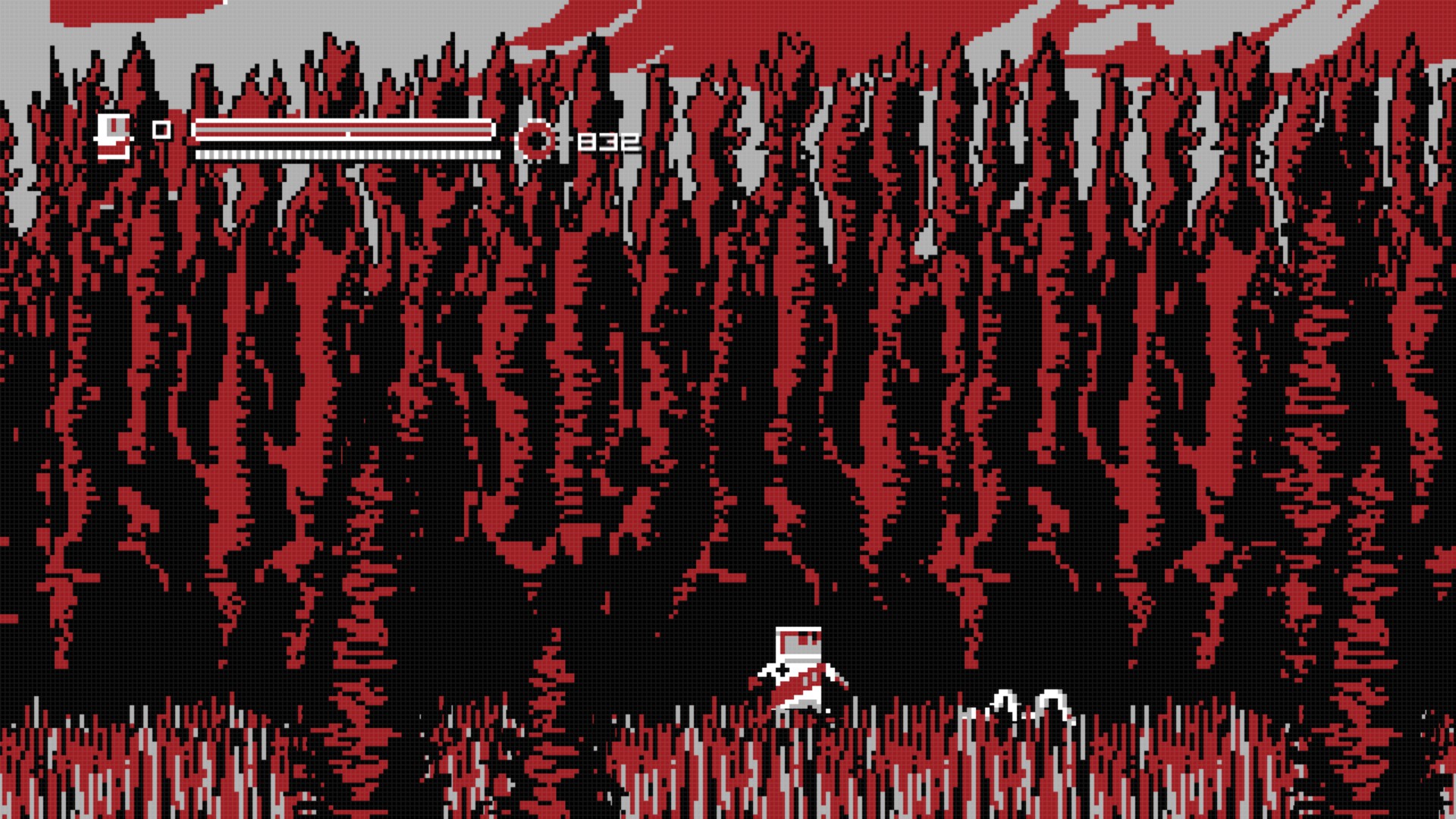 By default the game will launch in windowed mode, but once you get into the game the fullscreen option is a seamless one click to activate. The fullscreen mode works perfectly with my two monitor setup too so that’s fantastic.

I used the Steam Controller for my play-through, which worked flawlessly without needing to adjust anything.

It’s an action platformer styled very much like the classics, but it has a few twists thrown in. It has an upgrade system based on batteries, which you can adjust at any time during a level. You can give yourself for Max HP, more damage and so on.

You also collect “bits” from dead enemies, which are also used to permanently upgrade your abilities: 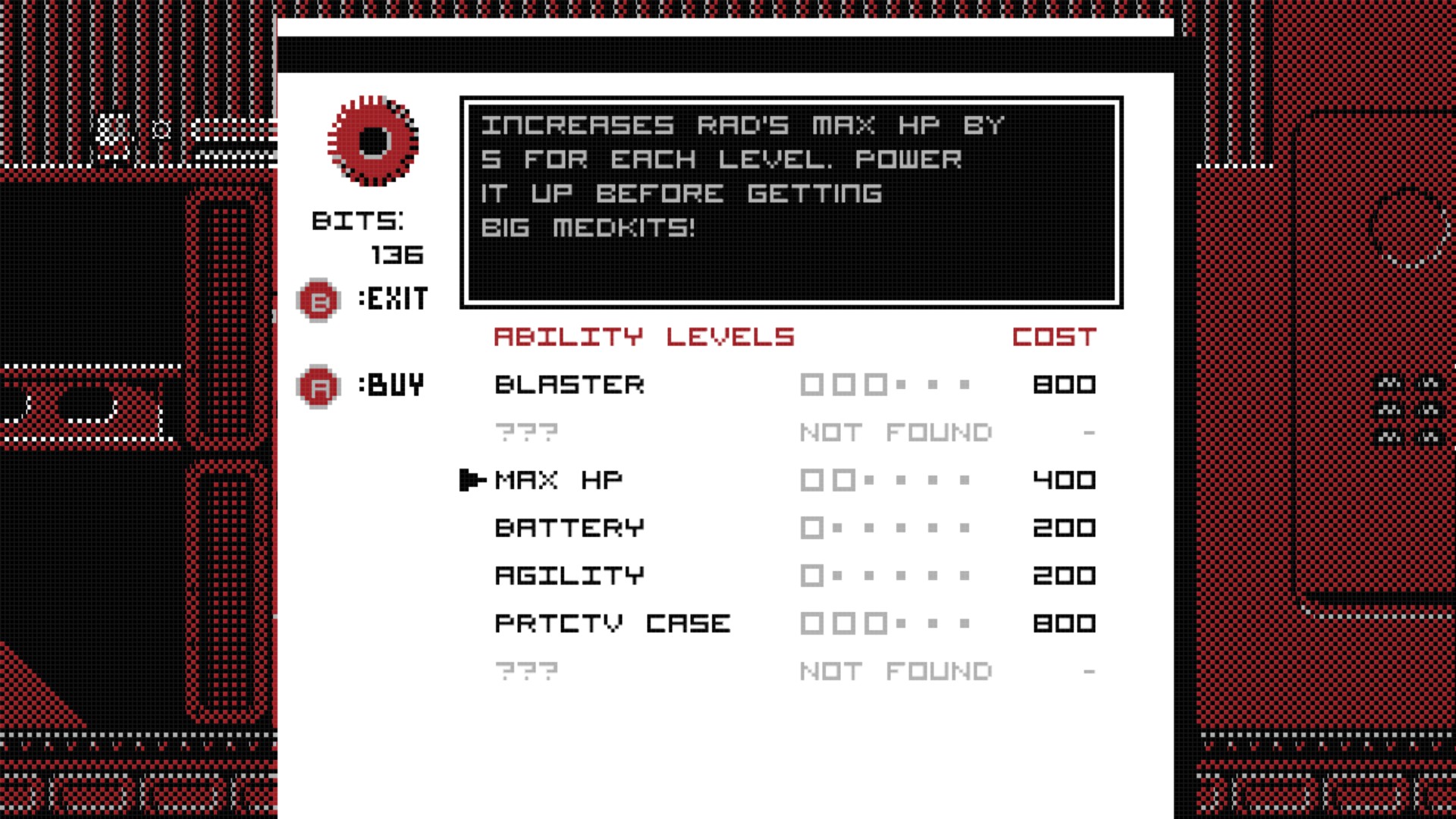 One upgrade I did especially like was the “Backlight” enabling a glow of light around you in darker levels: 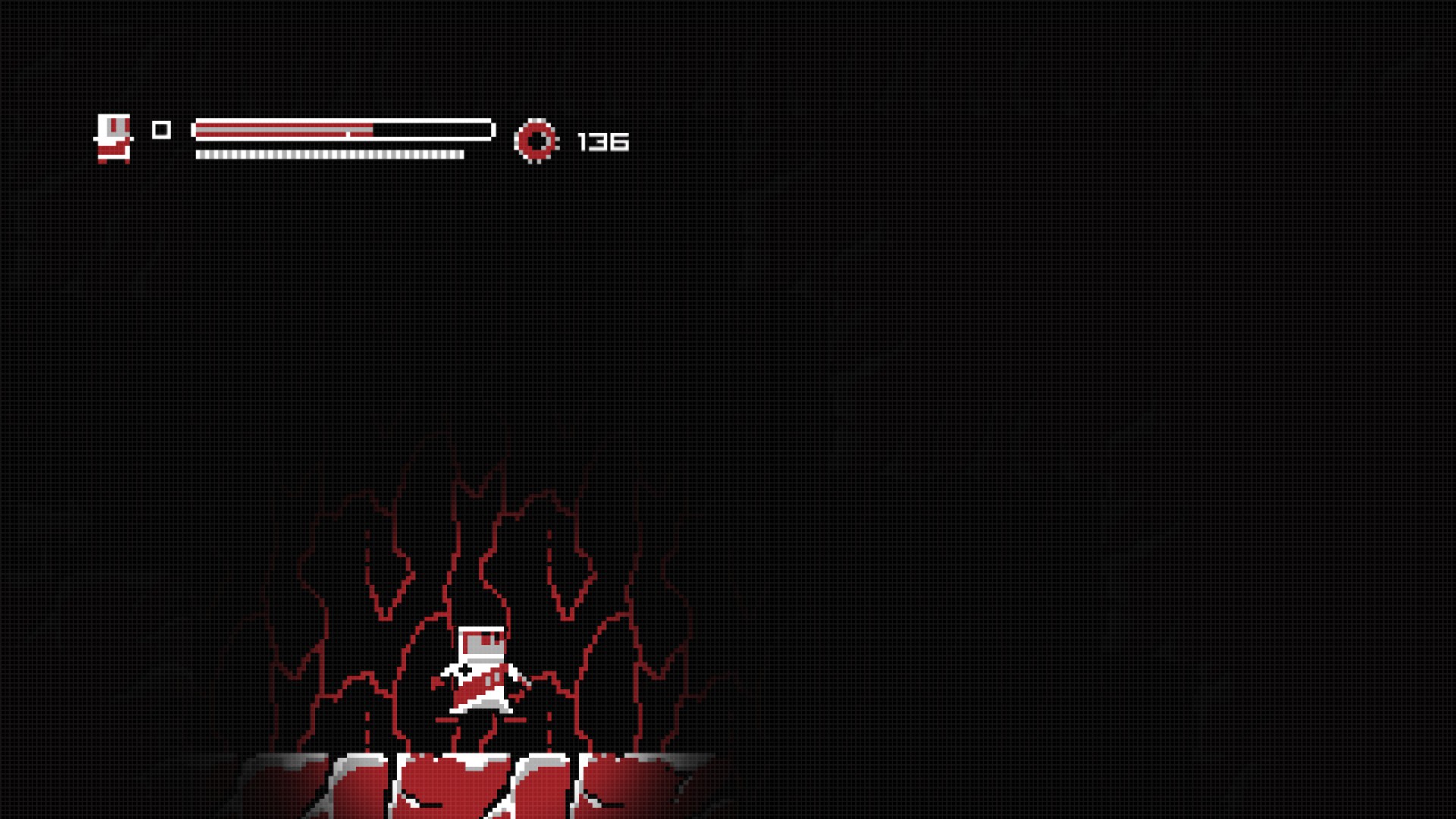 If your battery runs out, it becomes quite difficult, but luckily it recharges so you just need to hold off for a moment: 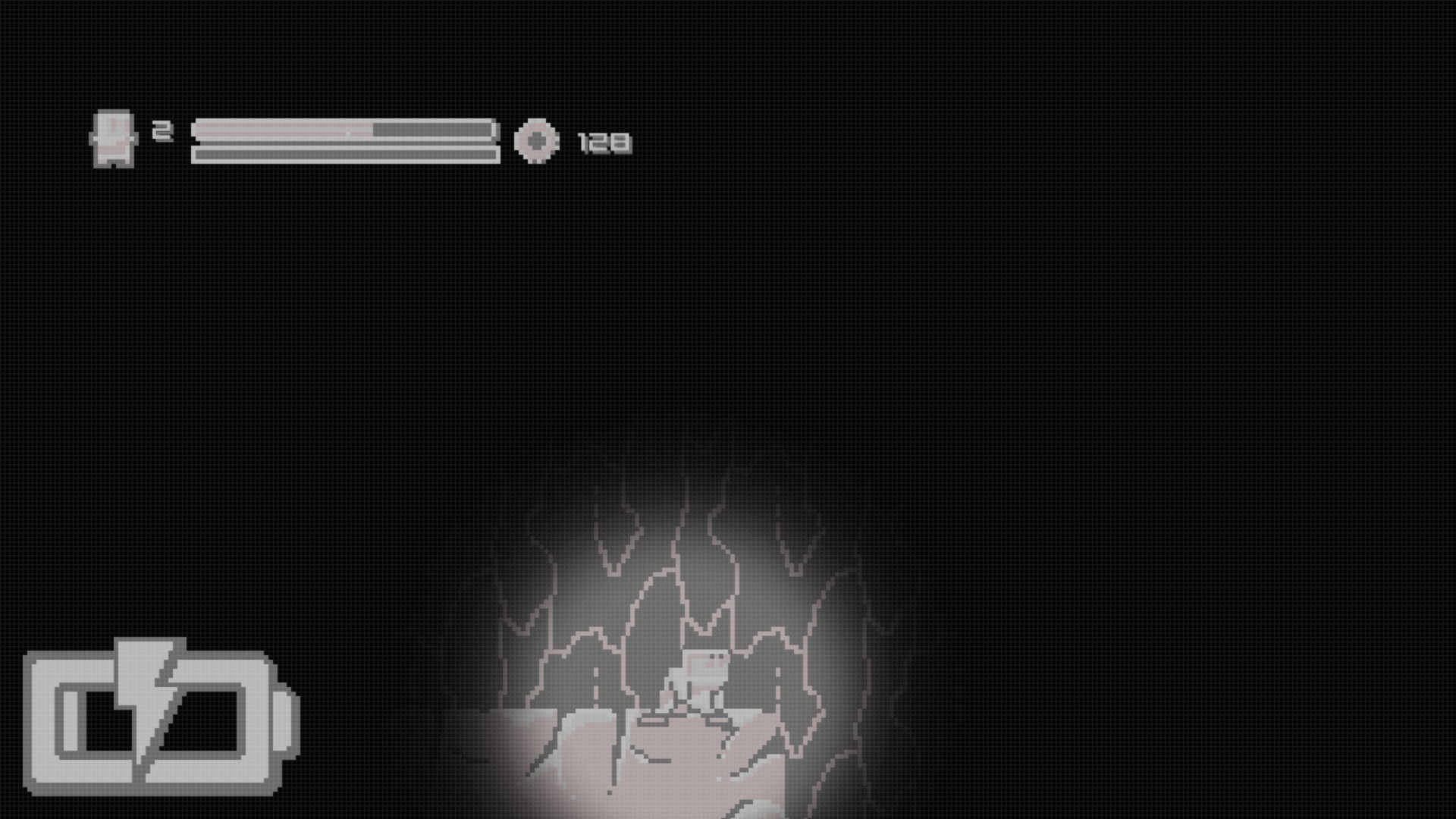 Some of the platforming elements can be quite tricky too, especially the one in the volcano. Tricky due to two reasons: the platforms crumble away as you touch them, and you’re jumping through screens (the screen does a slow scroll when you move between them) where some parts end up being off-screen, which doubles the difficulty. It took me a good 3-4 tries to actually nail that bit down, but I actually rather enjoyed that section.

Thankfully, when you die you don’t have to start all over again from the first level. Your progress is kept after each level which is a nice touch. They at least kept one or two modern features in like that to help prevent retro burn-out from the mechanics. Still, having to start a whole level over again, especially ones with really tricky parts to them did wear a bit thin on me in the end.

The music is absolutely fantastic! This really helps give it an authentic retro feel. Each level has a different tune and I can’t understate just how lush the music really is.

Overall, it’s a rather competent retro throwback and it really is rather well made, but it’s not going to win any awards as I feel it doesn’t go far enough in making its mark on the world. I will still recommend it, as it works really well and it's far better than some I have played recently. Article taken from GamingOnLinux.com.
Tags: Action, Indie Game, Platformer, Retro, Review, Steam, Super Rad Raygun
0 Likes
We do often include affiliate links to earn us some pennies. We are currently affiliated with GOG, Humble Store and Paradox Interactive. See more here.
About the author - Liam Dawe

Got this one in my wishlist just because of the music

.
No DRM-free release on Humble, itch or GOG unfortunately.
0 Likes

orochi_kyo 13 December 2016 at 6:17 pm UTC
View PC info
Seems cool but I think I cant handle those colors on a big screen, I mean my eyes would get tired fast.
0 Likes