Super Versus, a multiplayer action superhero game is coming to Linux

Ever wanted to be a superhero? I'm sure it's a dream we've all had at some point in our lives. Super Versus, looks like it will let you do that.

It's going to be free to play, with community server hosting support along with some kind of premium option for cosmetics. It will release initially in Early Access, so with that in mind it will get new features as time goes on. They say they're planning to include "matchmaking, competitive ranks, official servers, team based modes and player inventory for the full game". The free version will have casual play and community server support, with premium for matchmaking and ranked modes.

Footage from their beta test: 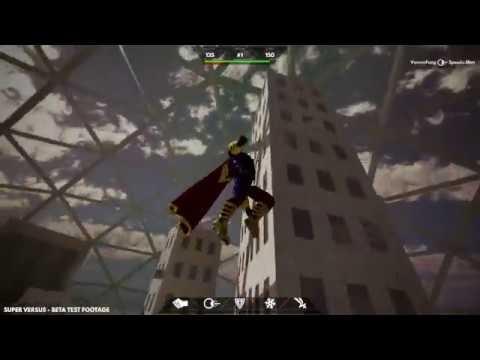 It does look slightly amusing, I will admit. Ridiculous outfits, capes, helmets and various powers to wield. The child inside me really wants to give it a go. Fly around, pick up a water tower and throw it at someone? Yes please.

Some details about it:

Update: I grabbed a beta key from the official site (you can too!) and I've had a test with the developer, it certainly seems like it's going to be a lot of fun. The cheesy voice lines are brilliant, can easily see myself playing this often when it's out properly. The actual gameplay is incredibly accessible, with really easy controls too so it's super easy to get into the fight.

I'm very curious to see how they will expand it, I'm especially interested to see what new abilities they're going to be adding in. The current abilities are fun and varied already, so that's sweet.

Article taken from GamingOnLinux.com.
Tags: Early Access, Action, Free Game, Indie Game, Steam, Upcoming
6 Likes, Who?
We do often include affiliate links to earn us some pennies. We are currently affiliated with GOG and Humble Store. See more here.
About the author - Liam Dawe

I don't think it seems ridiculous, and looks like a lot of fun.
0 Likes

Quoting: bgh251f2I don't think it seems ridiculous, and looks like a lot of fun.

Poor choice of words and not explained enough I guess, made it clearer.
2 Likes, Who?

Para-Gliding 1 Feb, 2019
View PC info
it's a reference to one of the worst game ever: Superman 64

View PC info
Testing it now the download is fixed and you know what, I think this is going to be great.
0 Likes

View PC info
I have a few keys for people willing to test, PM me if you're actually available for testing.
0 Likes
While you're here, please consider supporting GamingOnLinux on: