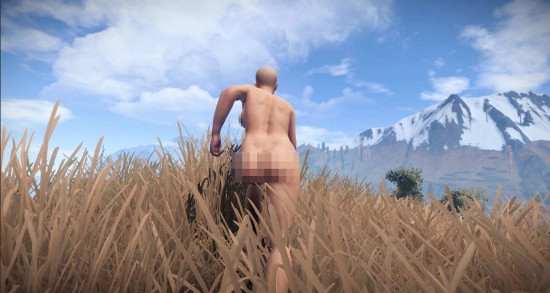 The survival game Rust from Facepunch Studios has been updated with a bit of a controversial change. They have added in new models, including female models, but you don't get to pick your gender.

QuoteWe understand this is a sore subject for a lot of people. We understand that you may now be a gender that you don’t identify with in real-life. We understand this causes you distress and makes you not want to play the game anymore. Technically nothing has changed, since half the population was already living with those feelings. The only difference is that whether you feel like this is now decided by your SteamID instead of your real life gender.

Your gender is linked to your SteamID, so what you're assigned to you're essentially stuck with. I'm fine with this, as I understand it's just a game. Others however, are not happy with this change.

I can understand both sides of the argument, people want their character to reflect them as an extension of themselves. I am a male in any game that lets me choose, simply because I also have that view of wanting it to represent me, but it's certainly not a deal-breaker.

Honestly, I think give it a week or two and people will calm down about it. What a weird thing to get so up in arms over—it's a game. Do people who complain about this steer away from every game where they can't choose a gender? I don't think so.

We do often include affiliate links to earn us some pennies. We are currently affiliated with GOG and Humble Store. See more here.
About the author - Liam Dawe
I am the owner of GamingOnLinux. After discovering Linux back in the days of Mandrake in 2003, I constantly came back to check on the progress of Linux until Ubuntu appeared on the scene and it helped me to really love it. You can reach me easily by emailing GamingOnLinux directly.
See more from me
Some you may have missed, popular articles from the last month:
The comments on this article are closed.
55 comments
Page: «3/6»

View PC info
Somewhat off-topic, but I wonder how many of the 800 bajillion early access survival games will ever make it out of early access and have a full release? 5%? 3%?
1 Likes, Who?

View PC info
does anyone else have a problem running Rust on Linux? Runs terribly for me.

As for me and my Rust experiences, I went through a lot of different updates and changes to my character. I was originally a black male. Now, like others said, it would be cool if my character was a reflection of me, but it was fine. I didn't mind. Since this new update, I'm now a white male, so I'm happy it reflects me, but I wouldn't have minded being a female. I think it's silly to get mad over. I believe the developers said in the past that Rust is a social experiment. (I may be wrong.)

I love Rust, and it's one of my favorite games. Unfortunately I have to play it on Windows because Linux is absolutely unplayable for me, but it offers a good glance into human nature when you put people into a realistic anarchy. Would be cool to have customization in Rust, and things like hair and tattoos would be cool, but until they do something like that, I don't mind new changes, as long as they keep updating the game.
0 Likes

View PC info
Minecraft did this exact same thing when they randomly assigned myself and many others the female "Alex" skin.
0 Likes

View PC info
Game characters as a reflection of the player? You can rarely customise them enough.

For instance, I look like Link, not Conan. If the game only lets me choose between Duke Nukem and Lara Croft, I tend to pick the one nearer to my proportions, which is Lara Croft.

Unless the developers genderifucked (Is that word understandable? I was looking for a word that describes "making something gender-specific that should not be gender-specific; and doing it in a way where it doesn't even work any more" ) the armour, in which case I take whatever can wear the more realistic armour.

kibbles 11 Apr, 2016
View PC info
I'm an attack helicopter transitioning to a radial tire. The fact I can play neither of these triggers me.
3 Likes, Who?

View PC info
I don't care much for the devs, but it is an interesting social experiment o3o To paraphrase Extra Credits, who covered Rust when they did the random race assignment, if you can't relate to your character because they're not white dude in a 1st person game, imagine how everyone else must feel about gaming as a whole.

Breeze 11 Apr, 2016
View PC info
Did they say this is how it will be in the final game or is this for testing purposes? If I want to test every combination of race/gender/body type. How do I do that? I randomly assign the characteristics based on some unique identifier (steam id). I wouldn't care either way.
0 Likes

View PC info
I have yet to play Rust (refused to buy it in early access, but I think I got it through humble bundle). Some have said it's not playable for them from Linux. I thought it looked awesome, but after my experience with 7 days to die, I had decided simply to not play it, but now I think it'd be kind of funny to find out of I'm a chick or dude based on my steamID!
0 Likes

View PC info
Also, skin tones and penis sizes change every so often with new updates. It's possible gender will change too.
0 Likes

Quoting: SeegrasFor instance, I look like Link, not Conan. If the game only lets me choose between Duke Nukem and Lara Croft, I tend to pick the one nearer to my proportions, which is Lara Croft.

No but seriously, in any game that gives me the choice, I choose robot because screw being a mortal meat sack. Unless the game consists of hours running around in third person, in which case female becomes a candidate.
1 Likes, Who?
« 1«3/6»
While you're here, please consider supporting GamingOnLinux on: