Surviving a frozen world in ICY: Frostbite Edition, some thoughts

ICY: Frostbite Edition [Steam, Official Site] is the complete remaster of ICY (which did not have a Linux version), here’s some thoughts on surviving this narrative-driven post-apocalyptic survival RPG set in a new Ice Age.

This review may contain some spoilers. 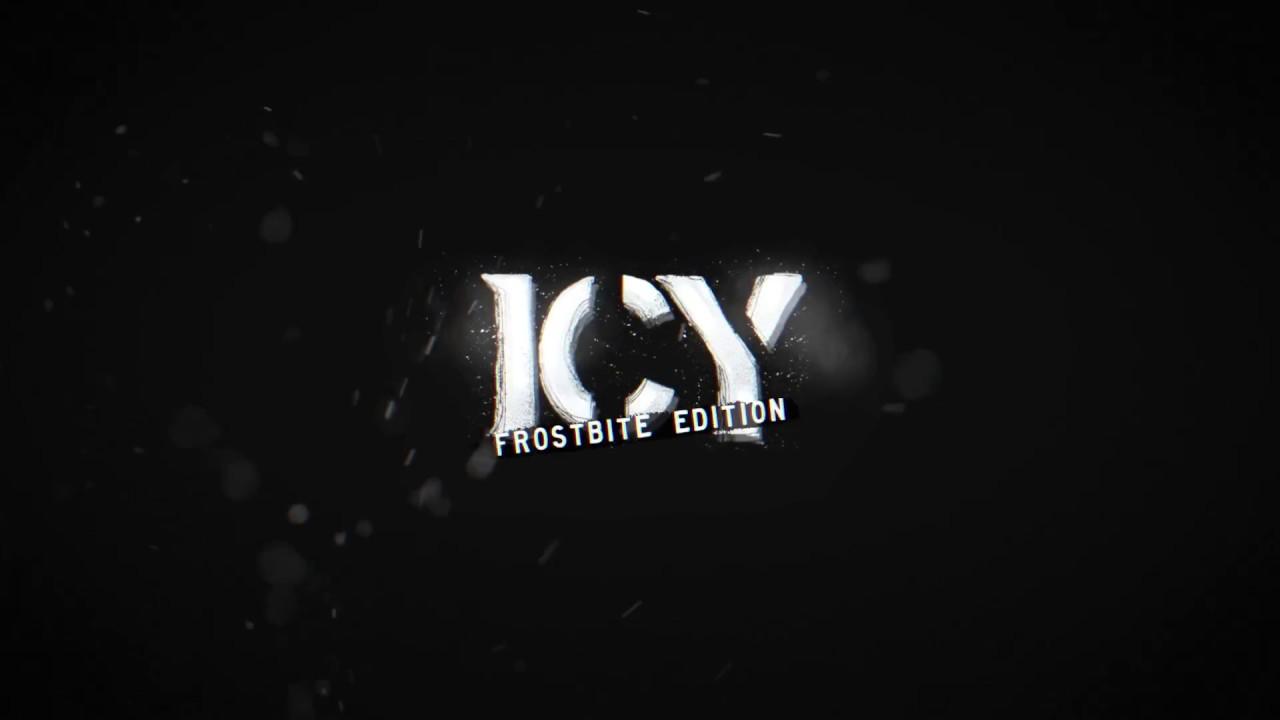 Note: It’s another Unity game that has broken fullscreen on Linux. To fix it until they update, you need to set the game into windowed mode. You can do this by setting this as a Steam launch option:

First, if you did happen to own the original even though it’s not on Linux, this new edition will be given to you for free. Always nice to see developers do this, as it makes sense for good customer relations.

ICY: Frostbite Edition is a slow-paced, narrative heavy survival game. Like a lot of apocalyptic survival games it paints a pretty bleak picture, as you and your group struggle to survive a frozen planet against all odds. We have no idea what happened to the world, only that there may have been some sort of war long ago.

ICY begins with the standard character creation, since part of the game is an RPG, so you’re able to pick your sex, character portrait and assign skill points. The only thing you can’t do is name your character. You actually end up going through the game as a nameless character which was odd. 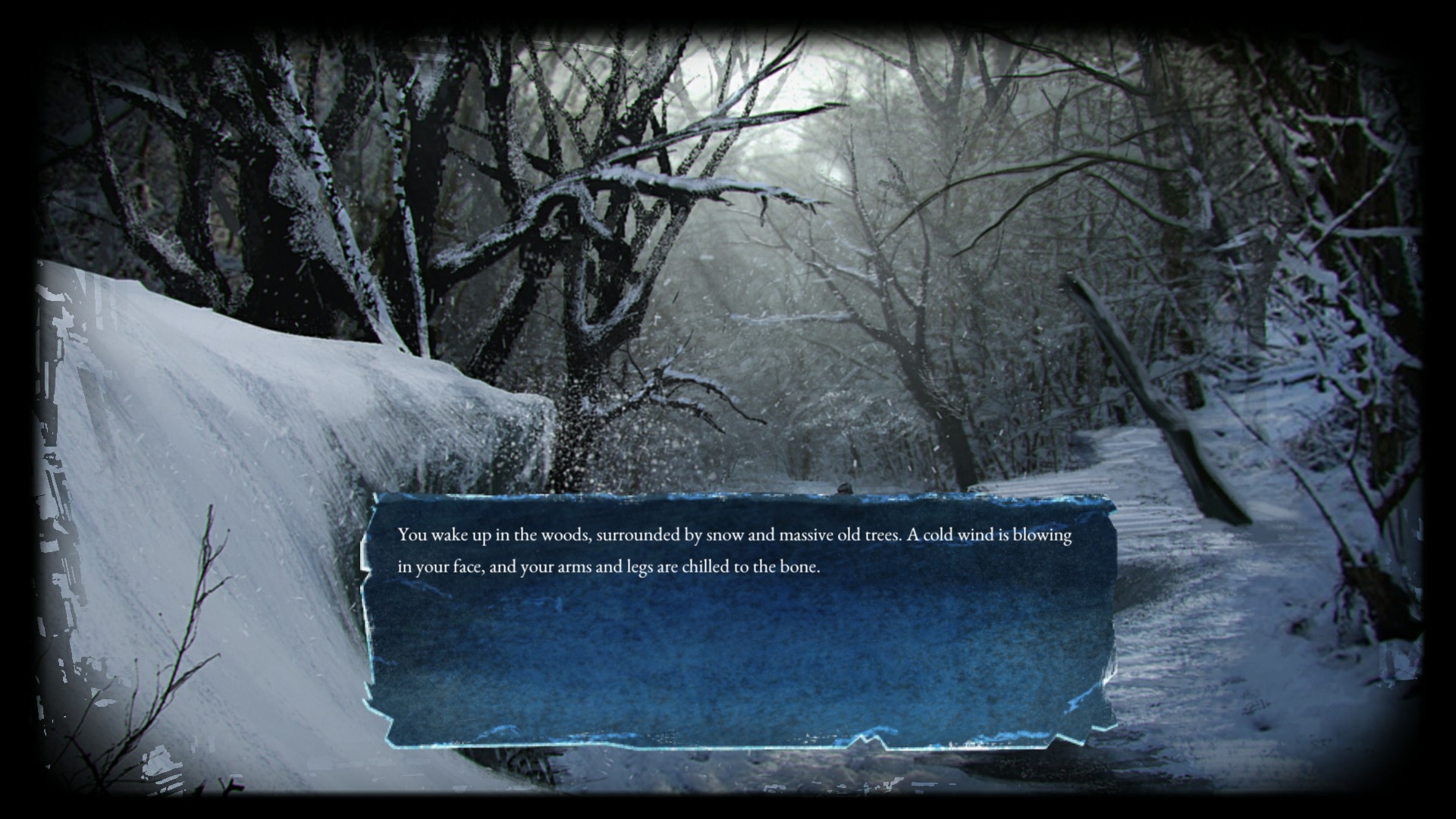 Prepare to read — a lot. While the game is story driven, it’s all text. There’s no narrator, no voice over and it’s a lot to end up taking in if you’re not prepared for it. While the game does have elements of an RPG, it’s very much an exploration and adventure game, where you pick a path and follow it through picking a few options on what to do. Each path you take will affect the overall outcome, as the game features multiple endings.

The game has some wonderful art, that really gives a sense of the frozen barren planet we’ve been left with. Still, it would be nice to have voice-over, so I can appreciate the art a little more rather than spending most of my time reading. It’s a good job the story seems pretty interesting. It feels a little slow to get into, but once you get past the first battle it certainly gets a lot more interesting. 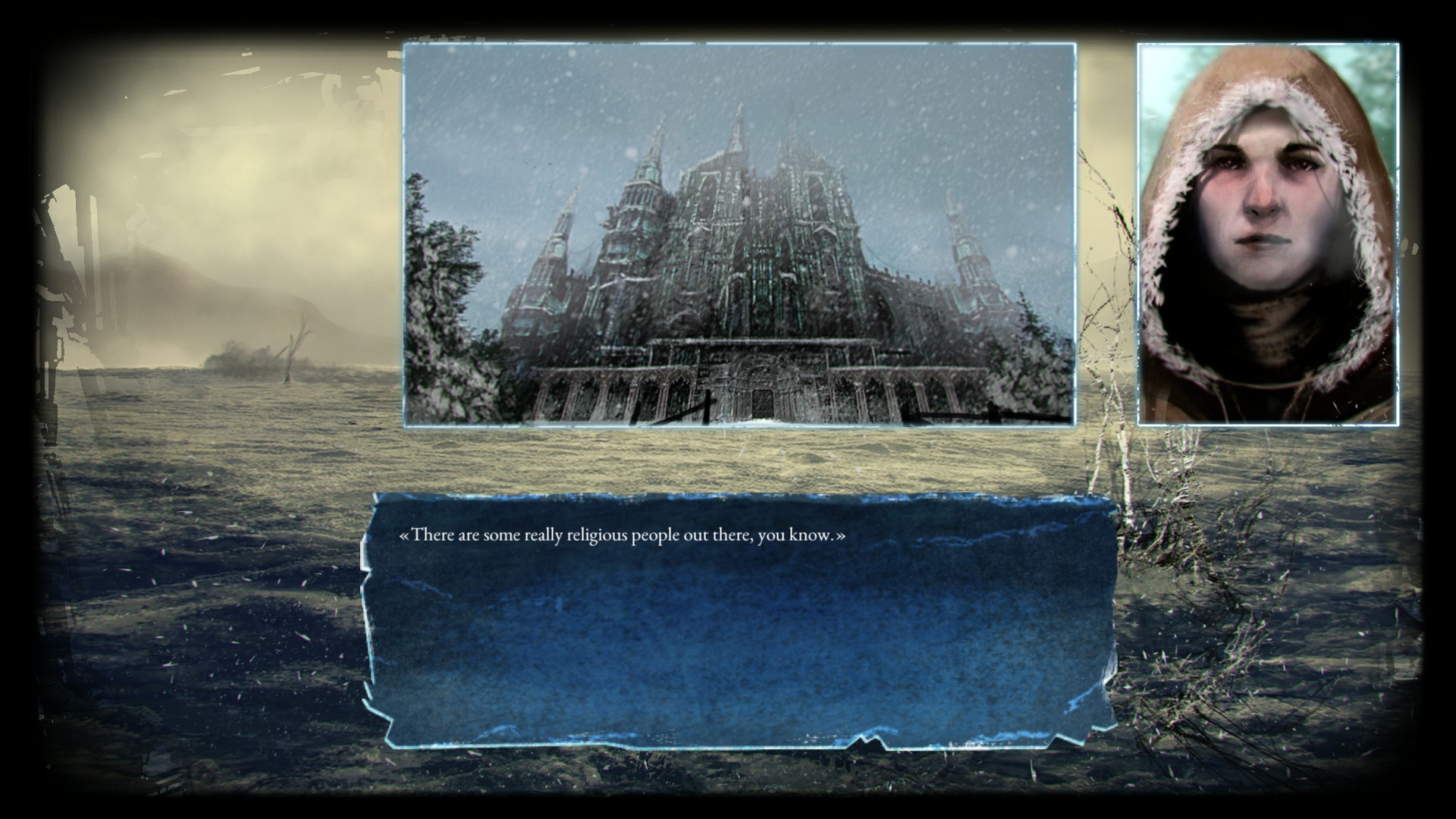 It doesn’t take long for your little group of survivors to come under attack, by a foe unsurprisingly much better equipped than you are and it’s a very one sided battle. When it comes to combat, the game is a bit of a mixed bag. It has turn-based combat, that sees you mixing together actions that change the attributes of an attack. A very neat idea, but the actual combat is pretty boring overall. There’s barely any animations to give you a sense of it being an actual battle, just picking your “cards” and watch health bars go up and down until the battle reaches it’s conclusion. A bit of a let down, it’s just a good job I liked the card system of combining them to make different attacks and abilities.

Another letdown with the combat, is the inability to switch weapons. If you have half of your group wielding guns and you manage to run out of ammo, you’re completely out of luck. That ruined one of my runs pretty quickly and it was a little annoying. It felt like artificial difficulty, considering bullets are also the currency. Even if they were going for a balancing act between fun and the survival elements, making you skip a go/take away their action cards for that turn if you switch weapons could have worked rather nicely. 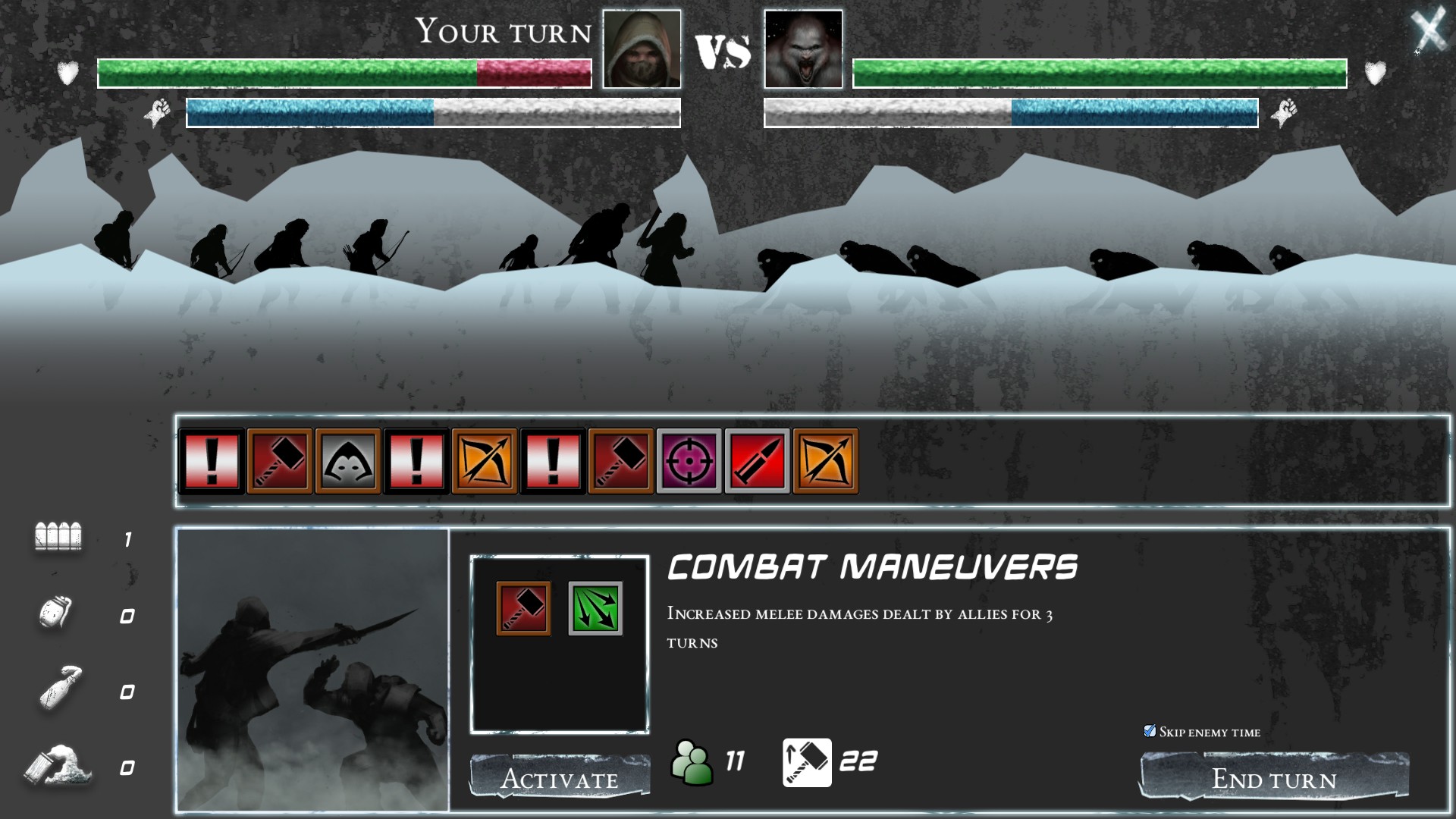 Another point in the game's favour is that it allows you to save at any point when you’re on the world-map. This allowed me to enjoy it at my own pace. For me, saving whenever I want is vitally important, especially in a game where you might spend hours to die stupidly, allowing you to “save scum” if you desire. If you grew attached to a certain character, you could load a save from earlier and perhaps go a different route.

The most interesting part of the game tends to be the exploration. I found the dead remains of “ancient” people (people who saw some apparent War that happened a long time ago), which only made me more curious as to what actually happened. You come across all sorts of scenarios from hunting to dealing with altercations between different groups of people. I came across a church, were some scary looking mutants were overprotective of some religious junk too. There’s lots of encounters to appreciate and writing is almost always exciting enough to keep my attention. 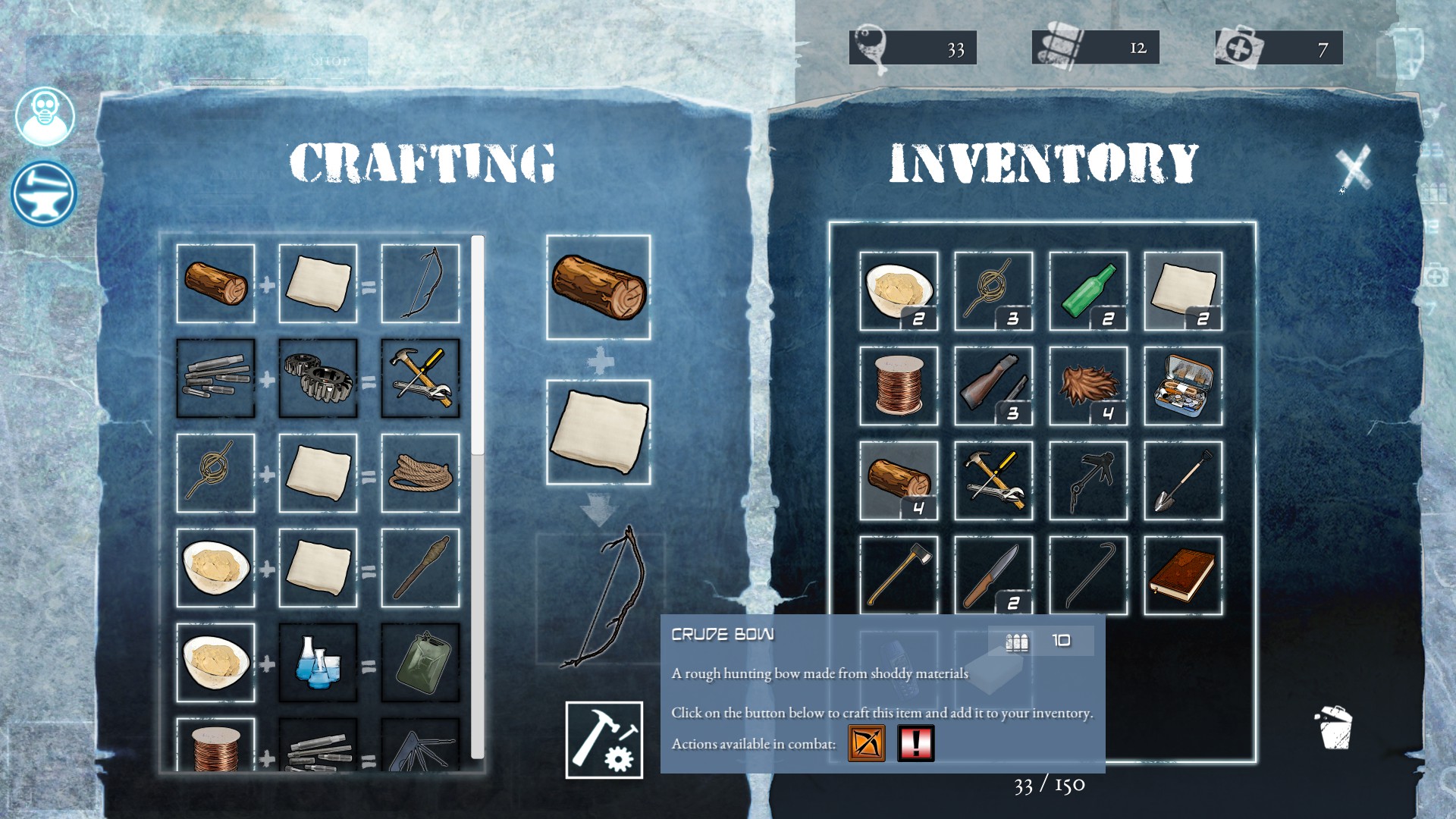 The game does feature crafting, because what game doesn't have a crafting system now? Thankfully here it's quite simple, where new items only require two resources. Inventory management is a bit messy, since all types of items are bundled together. Thankfully bullets, food and medical items have their own counters instead of filling up your inventory. You only start with a limited set to craft, but you can gain more by acquiring blueprints from traders.

The game also touches on harder topics like slavery and racism too. The game is post-apocalyptic, so it’s from a point where people have lost a bit of their humanity. I came across two groups having an argument, so I approached them. When I did, the fellow outside told me the “black man” had killed some of his group. This other fellow then came outside carrying a dead child in his arms and asked for the other group to tell you the whole story. The stranger I first met then called him a “lying coon thug”. I managed to rescue the fellow getting the abuse, who later told me his name and that the people after him were slavers. I felt pretty good about my decision to help him then.

A thrilling survival and exploration game, that feels a little like a visual novel at times. If you’re after a story-driven survival adventure, it’s one to take a look it. I’ve enjoyed exploring, but I do wish the combat was a little more interesting.

I especially liked the little quip about the Nokia phone.

Article taken from GamingOnLinux.com.
Tags: Adventure, Indie Game, Review, Steam, Survival
3 Likes, Who?
We do often include affiliate links to earn us some pennies. We are currently affiliated with GOG, Humble Store and Paradox Interactive. See more here.
About the author - Liam Dawe

View PC info
Beat this back on Windows in the original version
Had issues running this one on Linux but totally forgot about the Unity full screen bug.
0 Likes

View PC info
Good review and I agree with all points except:

QuoteAnother letdown with the combat, is the inability to switch weapons. If you have half of your group wielding guns and you manage to run out of ammo, you’re completely out of luck. That ruined one of my runs pretty quickly and it was a little annoying. It felt like artificial difficulty, considering bullets are also the currency.

Erh, what? 2 hours in the game, you are basically swimming in bullets. Not once in the game was I short on them and I wasn't even grinding, just visiting locations as I went from A to B.
If anything, you have far too MANY bullets.

And I actually think the combat is a good example of how to do combat on a tiny budget. Fancy animations aren't really needed.

View PC info
Well that depends what difficulty you're on and how good/bad your run is going.
0 Likes

Quoting: liamdaweWell that depends what difficulty you're on and how good/bad your run is going.

I don't remember the name, but I always pick one above the normal difficulty. The "hard" equivalent, if you will.

I could really only see you getting short on bullets in the very beginning and if everyone is using guns instead of other weapons. But in that case, it would completely be your own fault. Besides, I don't even think all the NPCs are good with guns.