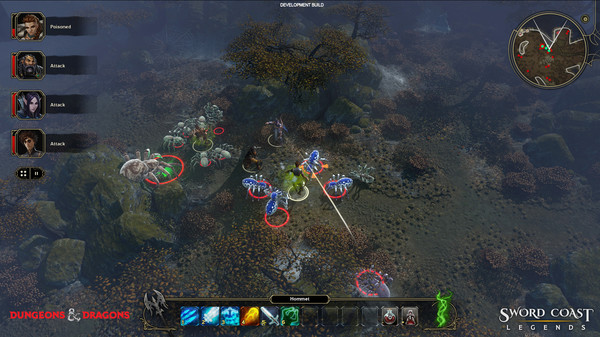 We don’t have too many high quality RPG titles, and I was excited to finally give Sword Coast Legends a proper try.

Note: If you have me on Steam, ignore the time it says I've played. I played it during the Head Start Access too.

It has at time of writing gained a lot of mixed reviews, and I understand why some people aren’t happy with it. It’s certainly not as in-depth as it could be with any part of it, but with that said I’m personally finding it enjoyable for the most part.

The game world is actually quite beautiful and bright, which makes it quite easy on the eyes and I imagine a lot of people will be able to get into it. It’s great that we have so many games, but not a lot look as good as Sword Coast Legends. The only graphical part that is a let-down are the character models and running animations, as they look a little awkward. It’s especially awkward when the camera zooms in to show an enemy running into the area, as their running animation seems weirdly sluggish.

I also found it quite weird picking your weapon and armour at the start, it was interesting to be able to do it, but there was no explanation of what would be best for your character. Honestly I found this section quite confusing.

Choosing abilities was much nicer, with a wide range of different things to choose. I decided to level up my archer’s stealth as much as possible, as I like the idea of sneaking up on someone with my bow and arrow.

Gameplay
It feels very much like Baldur’s Gate, and it has real time with pause combat which is nice. It doesn’t feel as unforgiving as Pillars of Eternity, as I’m finding the combat to be much more manageable. Even though it has the pause option, it seems quite fast paced when you put it next to Pillars. I can’t quite put my finger on why it’s making me feel that way.

During the character’s chatting it doesn’t actually say anything about skipping, but you are able to skip dialogue by pressing the spacebar. It’s odd they didn’t put any indicator on the screen to tell you, so I found this out by chance.

One thing I do like, is that your inventory is shared across the characters. This removes a lot of micromanagement I’ve seen in other RPG games, and helps make it a little more accessible. It’s one thing that annoys me about other games, so I’m actually quite happy with that here.

One thing that is currently getting a little annoying, is that every single movement click has a character voice over. Honestly, I would much prefer it if they did it every x amount of movement clicks, as to avoid becoming annoyingly repetitive like it is right now.

Another gameplay annoyance is most things are done with left click, so if you miss click during combat prepare to have your character run around. I’ve seen other people complain about it too, and it does get annoying. Luckily the developers are responsive and may put in a right click to move option.

Performance
Performance seems to be satisfactory on high settings, as i'm getting between 50-60FPS on my 970, so while it’s not amazing, it’s playable. If I turn it up another notch to the Best setting, I get a big performance drop to 30-50FPS. It does still remain smooth, and it is playable, but I can imagine people with less expensive cards struggling a bit. It does seem like it could do with some optimizations, as I’ve seen posts from Windows users saying it performs badly for them too, so it’s not specifically an issue with the Linux version.

Issues
Currently the Create account button doesn’t work on Linux (at least it does nothing on my Ubuntu install), so you may need to create an account here. This annoyed me somewhat, as I wasn’t aware I needed to register to play even the single player portion of the game.

I asked about it on the forum, and the reply was this:


QuoteThat is some crap. Not sure we've seen that with other Linux users at all but I'll pass it along. Possible the actual launch version might fix it? Keep us posted!

Not the reply I was expecting really. I can’t test if the release version has fixed it, as there’s no way to logout.

Final thoughts: It’s actually not bad, not bad at all. Not incredible, but worth picking up if you’re an RPG fan like me. I’m finding it much more accessible than Pillars, and I’m enjoying it much more. However, if you’re looking for something more in-depth, go get Pillars.

ricki42 20 Oct, 2015
View PC info
I don't like the idea of having to register to play the single-player game. Is it possible to play it offline at all?

About the voiceover when giving characters commands, is there no way to turn that off in the options? Baldur's Gate did the same thing by default, but then it had an option to reduce the voiceover to only happen occasionally, or turn it off completely.

The rest sounds pretty good. I wished I had more time, still haven't finished PoE, so I think I'll wait a bit before jumping on Sword Coast Legends.
1 Likes, Who?

View PC info
DRM on top of DRM? Gonna avoid this piece of trash. Didn't like the devs from the start and now I have another reason to continue seeing it that way.
3 Likes, Who?

View PC info
This game is like a Gauntlet with a Game Master and D&D rules.
I'll pass.

Still waiting for a NWN successor.

Quoting: amonobeaxThis game is like a Gauntlet with a Game Master and D&D rules.
I'll pass.

Still waiting for a NWN successor.

This. I'll stick with Pillars thank you very much. Hopefully Obsidian gets a chance to create NWN3 someday.

View PC info
It seems to be a mix between 2nd edition rules (what I grew up with) and 5th edition with easier to manage skill tree, which I like, although yes, I still overall prefer the old method of rest and being able to select spells appropriate for the Wizard out of the book, but I like how much more steamlined the method they've chosen is, but it is indeed a controversial one which Wizards of the Coast gave their blessings for.

The DM mode is interactive, you can take over a monster and use it directly with full access to its abilities and if appropriate spells, which adds to the multiplayer fun. Oh and if you have a microphone you can talk directly to other players as support is built in.

The camera is much better than Pillars (I know and understand their decision to not invest in the scenery so they can lock it to one view) , you have full control and can spin it around all sorts of ways.

The campaign is actually a lot of fun, with good voice overs (I barely checked the options for the VO) and an interesting story from what I have seen so far with some unexpected turns and choices which actually seem to count. Also noticed your game auto-saves, so if you choose an option you cannot seem to easily load and go back, which is actually not necessarily a bad thing. Most DM's won't let you say, "oh ooops, let me go back and try this option..."

So far its a very fun and cool game, still a baby as games go and look forward to seeing it develop further, hopefully. Most of the negativity seems to come from what others have mentioned about the skill trees, lack of classes, and no multi-classing (which matches the mix of 2nd edition with 5th), but to me it very much captures the essence of D&D and reminds me of those 12+ hour D&D sessions from when I was young. Spiritual successor to NWN? Not quite, not yet. I don't think they're ever will be because my personal requirement is that it needs to be set within the D&D lore, not a copy of.
1 Likes, Who?

Not so much Story Wise, but gameplay wise - yes. This is based mostly off the 5th Edition PnP RPG Rules. The game only has a half of the classes and and handful of races (playable that is) from 5th right now, but the first DLC (which if free/not free - not clear on that one) will add an additional class and race.

The Story is definitely a good story, but it also serves as an intro to the game. It's designed to bring a near complete D&D experience to video games.... DM Mode allows for player to create entire modules/stories set in other parts of the Forgotten Realms. In one case, the World Map even showed the new locations for that module.

Finally, Dungeon Crawl is fun too. Just set some presets for a dungeon tile set, quest settings, floors, size, difficulty, and monster groups and enter - randomly generates a dungeon to you specifications (or the DM's if one is playing)
1 Likes, Who?

View PC info
I'm sad that Dungeon Master Mode doesn't let you do branching dialogues right now, kinda kills any desire I have to create adventures at the moment, since I don't want to create straight dungeon crawls, I want to create stories. Hopefully they add that in the future, as it's one of the most requested things on their forums. As for the campaign, I only just started, but I've had fun with it so far. It's definitely closer to NWN than Baldur's Gate.
1 Likes, Who?

Quoting: SuperTuxThe camera is much better than Pillars (I know and understand their decision to not invest in the scenery so they can lock it to one view)

You're off beam: Pillars has 2D backgrounds, which aren't cheap to make with the level of detail they have, and they decided for 2D background because they wanted to make a successor to the Infinity Engine games which are isometric games with hand crafted 2D backgrounds.
2 Likes, Who?
1/3»
While you're here, please consider supporting GamingOnLinux on: