System76 sent word earlier about something new. A new (and rather powerful) Linux laptop named the Adder WS. The Adder WS will be the first Linux machine from System76 to include an OLED display, with a 15" size and 4K support it's sounding impressive.

They're saying it's a "workstation laptop", as it's going to be quite the beast. The base standard configuration will have an Intel Core i7-9750H CPU and you can push it up to an i9-9980HK, the top end Intel offer for Laptops (according to System76). It will also come with an NVIDIA RTX 2070 GPU which "uses effective cooling techniques that allow the graphics card to reach its full performance potential"—so it sounds like a pretty damn good unit for some intense Linux gaming sessions. 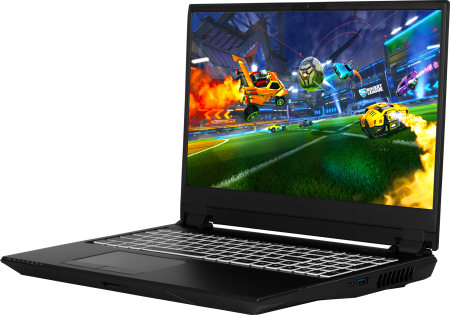 For the rest of it you can have it with up to 64GB RAM, and up to 8TB storage, which includes up to 4TB NVMe storage. It also includes three USB 3.1 Gen 1 ports, three video ports (HDMI, mini DisplayPort 1.3, DisplayPort 1.3 via USB-C 3.1 Gen 2), Thunderbolt 3 via USB-C 3.1 Gen 2, a pair of 2-in-1 Audio Jacks (headphone/microphone, microphone/SPDIF), and an SD card reader (up to USH-II) so it's fully decked out for all occasions.

They're preparing for release and a bigger announcement in "early August", with the initial details shared early. Will let you know when they send over any more details about it.

Article taken from GamingOnLinux.com.
Tags: Hardware, Upcoming
14 Likes, Who?
We do often include affiliate links to earn us some pennies. We are currently affiliated with GOG, Humble Store and Paradox Interactive. See more here.
About the author - Liam Dawe

I am the owner of GamingOnLinux. After discovering Linux back in the days of Mandrake in 2003, I constantly came back to check on the progress of Linux until Ubuntu appeared on the scene and it helped me to really love it. You can reach me easily by emailing GamingOnLinux directly.
See more from me
Some you may have missed, popular articles from the last month:
The comments on this article are closed.
13 comments
Page: 1/2»
D0J0P 2 Aug, 2019
Is that how it looks like in the picture above?
1 Likes, Who?

View PC info
Isn't it at this point easier (also cheaper and more scalable) to just have a desktop workstation...? And a cheap laptop on a side if you really need that mobility but, yeah, most people don't.

I will never understand the reason for Gaming Laptops. Either go for a Console or PC. But yeah i guess nice for those who are willing to buy it or so.
1 Likes, Who?

Quoting: cprnIsn't it at this point easier (also cheaper and more scalable) to just have a desktop workstation...? And a cheap laptop on a side if you really need that mobility but, yeah, most people don't.

Depends on the job, but laptop and desktop workstations aren't necessarily exclusive to one another. You can have the desktop for your main work and the laptop to move around a building or to other buildings, but maybe you need the laptop to be capable of renders and data computing too where you're going. Maybe you need to bring the laptop home to finish work some nights, or any number of other excuses as long as you or the company you work for deem it worth it.
3 Likes, Who?

shotm7 2 Aug, 2019
View PC info
A cheap and slim laptop on Linux with a good autonomy is all I want, unfortunately there are not many offers, I think even there is zero.
0 Likes
Fishticon 2 Aug, 2019
I'm guessing "Adder" is a nod to Death Adder from Golden Axe on the SEGA Genesis.
0 Likes

View PC info
Being able to play games on a laptop is a great luxury. It makes LAN parties easier, and so they happen more often. Convenience has a cost. Not worth it to you? Fine. Don't buy it then. When I was a teen, my friends and I all had laptops that could play our favorite games, and so we met up really often. That was worth it.

Apart from gaming, many people at my company only have a laptop. They have extra monitors and peripherals at their desks. When they pick up their laptop and go to a meeting or home, they have their actual workstation with them.
5 Likes, Who?

Quoting: TimeFreezeI will never understand the reason for Gaming Laptops. Either go for a Console or PC. But yeah i guess nice for those who are willing to buy it or so.

Some people live a very compact life I guess, no house/home, no possessions, no TV, always on a bus or in a library/study somewhere. Guessing that is the type of person this is aimed at.
0 Likes

View PC info
Many (most?) people that buy laptops would be better served with a desktop.
But when they go to a shop (mostly FNAC and Worten here in my country) they are presented with a plethora of portable devices, including Macs in their ever-so-posh corner, and only a handful of desktops at the end, sort of ashamed to be there.
The idea in their minds is that the desktop is a disappearing species and that laptops are trendy and posh; so they buy laptop.
Another thing is Marketing. Take the new Intels: the i7 1065G7 has 1.3 GHz base frequency with a (single) core turbo boost of 3.9 GHz. They'll only see the 3.9 value. And don't you go explaining that base frequency is where it stays most of the time (and even that will throttle) and why a mid range desktop counterpart is vastly superior because it can boost all-core 4.5 GHz for days on end: you'll be wasting your time.
0 Likes
1/2»
While you're here, please consider supporting GamingOnLinux on: