Take out enemies from an attack helicopter using an FLIR camera in Chopper: Lethal darkness

Chopper: Lethal darkness [Steam] is a simple indie game about taking out enemies from an attack helicopter with an FLIR camera. 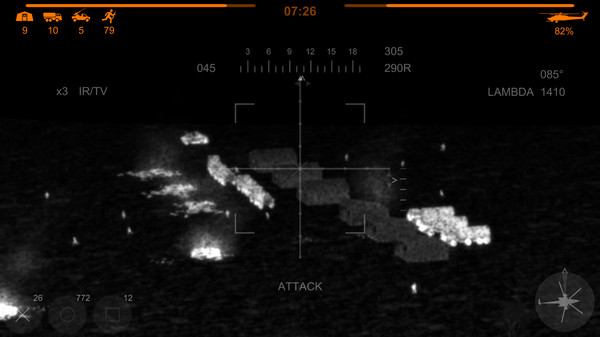 The developer announced a Linux release this month, with a short one-liner about it being available.

In the game you setup a flight plan picking your route across pre-defined waypoints. Once you reach one, it circles around allowing you to get in on the action. I actually love the idea of these games, but they're never usually all that good.

I'll be honest, at £2.79 you probably shouldn't expect much at all from it. It has the signs of the bargain bin games I used to find in shops like PC World when I was younger. However, the small amount of user reviews it has so far give it a reasonably good look overall.

It also has a DLC to see things from the opposite side, as a gunner trying to take down a helicopter.

Article taken from GamingOnLinux.com.
Tags: Action, Indie Game, Steam
1 Likes, Who?
We do often include affiliate links to earn us some pennies. We are currently affiliated with GOG, Humble Store and Paradox Interactive. See more here.
About the author - Liam Dawe

Quoting: Doc AngeloEh... this seems to cross the border between fiction and reality for me in a very wrong way. I don't think I want to play this.

I guess it strikes a similar nerve to Unmanned where you play a drone pilot.

EDIT: Looking at it closer now it looks more like it's playing it straight, blissfully unaware of the horrible thing it depicts. Unmanned specifically set out to make a statement.

Quoting: rustybroomhandleI guess it strikes a similar nerve to Unmanned where you play a drone pilot.

I think the game here strives to be exciting and fun. Molleindustria, the makers of Unmanned, are striking that uncanny nerve intentionally. Molleindustria are doing serious/educative games. They did the "anti-advergame" McDonalds-Manager and Phone Story for example.
0 Likes

Quoting: Doc AngeloEh... this seems to cross the border between fiction and reality for me in a very wrong way. I don't think I want to play this.

My first gut reaction exactly. Warfare to kill people from miles and miles away with a joystick. I refer to a real war video on YT i remember running into way back; where the "soldiers" rejoice while pressing buttons from a cozy command center office; "look at all those dead bastards"

View PC info
Huh? In most military shooters you kill people all up close and personal. I don't see how this is any different.

Maybe that your enemies are less capable of fighting back?

'Death From Above' from cod 4 was a pretty cool level. I like the idea of a simple indie based on the same idea.

Btw in that "look at all those dead bastards" video they were shooting journalists(not intentionally).
Also, in this game you are in an attack helicopter, not a cozy office with a joystick.

View PC info
I don't mind shooting people, most of the time it's fun...

It seems to be a pretty simple game, without much to do beside sooting things with some realistic tools (i never did shot people in real so i don't know about the realistic part). I like the effort with the arts in night vision, but that's all.
0 Likes

View PC info
FYI
To anyone interested , Samsai played this on Stream couple weeks ago.
0 Likes

Quoting: Gonza565Huh? In most military shooters you kill people all up close and personal. I don't see how this is any different.

For me, it is the reference to this incident: 2007 Baghdad Airstrike

Of course, shooting people in any way is more or less the same. The difference is, that I grew up with shooting games since I was a kid. As a kid, I couldn't really grasp what happened on my screen. As a kid, it was just a kind of "sport": Performing against computer opponents or online opponents within a certain set of rules and tools. I play a lot of PUBG for example. For me, the point of PUBG is not killing each other. It's just a part of the visualization of the rule set. If PUBG would be released with Paintball Guns, it wouldn't make any kind of difference to me.

I saw the leaked videos of the incident as an adult, and I was disgusted by it. That's why I can't enjoy a game with very similar visuals to the leaked videos. I already formed a connection to real people being slaughtered.

View PC info
This sounds a lot like a Chopper game I played on an Apple II when I was a kid.

That farther you are from the killing you're involved with, the easier it is. You don't feel as much of the human damage you're causing. You can tie our tax dollars to warfare. Not that we have a choice in that matter, but we fuel it. It couldn't happen without our funding. You can also say shooting someone is probably mentally easier than strangling them. Quick and distant versus intimately close. But when it comes down to it, is there more loss of life in modern warfare than melee, or less? I'm not saying we should desensitize ourselves... just trying to look on the... uh, brighter side.
0 Likes