In the comments of our recent Dying Light article, a video was posted showing two Techland developers talking about their porting of Dying Light to Linux. It’s quite interesting. 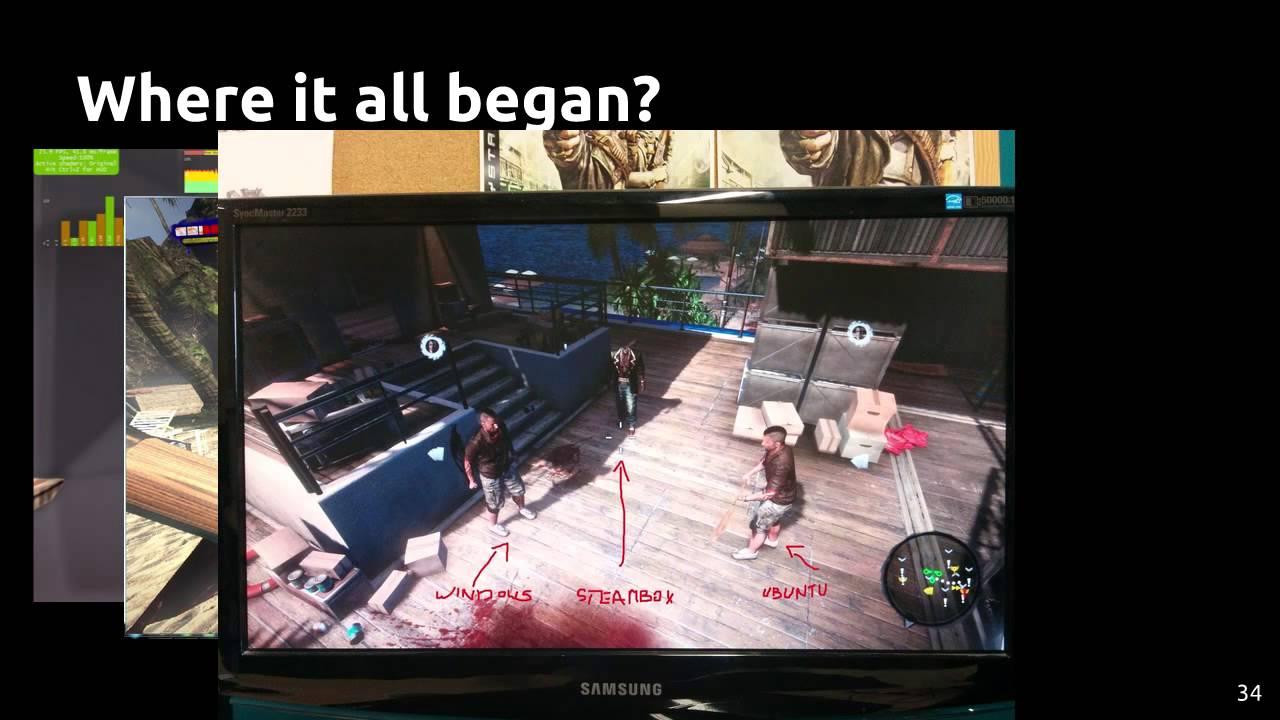 One of those developers speaking is actually my personal contact at Techland, so it’s nice to put a face to the emails.

The start isn’t in English, but it seems the rest of it is, and it’s quite informative.

First of all, I found it amusing that they were having problems with their presentation on Windows, while trying to talk about Linux porting.

A key fact here is that out of around 300 people, only two people work on the Linux version (the two presenting). While it’s true that throwing more people into it doesn’t always help, it’s hard to imagine the colossal project they had to port. This presentation will give you an idea of the struggle they had, and kudos to them for their work.

They were only given 4 months to prepare the Linux version, so it’s easy to see why they had a hard time getting it right. You will understand why when you see what they had to deal with too.

The talk is very technical, but one thing I did find quite striking is the build time difference between Visual Studio (8 Minutes) and Make (70 Minutes). They did find an alternative to make, but it still doesn’t come close to VS’s time.

The Dead Island port was also mentioned, and the problems with the loot system not working correctly on Linux.

Their video around the 25 minute mark was amazing, showing little comments for Linux gamers like “with ssao disabled game looks terribly”, a shot on the main menu completely messing up, and after a comment of “after patch game doesn't start when using primusrun”. There’s also the golden “game doesn’t start” comment and a few others. It’s mostly poking fun at themselves, and shows they have a sense of humour.

A lot of it went over my head, but it’s all still very interesting.

Many thanks EKRboi for pointing it out in the comments

Article taken from GamingOnLinux.com.
Tags: Editorial, Video
1 Likes, Who?
We do often include affiliate links to earn us some pennies. We are currently affiliated with GOG and Humble Store. See more here.
About the author - Liam Dawe

edo 23 Apr, 2015
View PC info
but what about the opengl implementation? is it totally native or is similar to the one used in source?
0 Likes

MaxPower 23 Apr, 2015
View PC info
For windows they distributed the build to all the computers available in the company while for the linux build they might not have or not on the same number of machines. They don't say but it could be one of the explanations why the make was so much longer.
Also 2 dev for 4 months, it does not sound very expensive to port the game to Linux.

Lastly it would have been nice to know why they decided to do the port.

I assume that the dev you are in contact with, is the first guy as he seems to enjoy Linux. The other one used Windows while doing the port to Opengl.
0 Likes

minj 23 Apr, 2015
Regarding compiling/linking: I think both valve and @icculus have talked about making it better with centralized caching etc. So there are tricks to build games faster.

But sure, -j 8 is not the same as using all the boxes in your company, duh
1 Likes, Who?

View PC info
This was a very cool talk. I've not played any of their ports but for just two 2 people to pull this off is a great feat of talent.

Quoting: MaxPowerFor windows they distributed the build to all the computers available in the company while for the linux build they might not have or not on the same number of machines. They don't say but it could be one of the explanations why the make was so much longer.
Also 2 dev for 4 months, it does not sound very expensive to port the game to Linux.

Lastly it would have been nice to know why they decided to do the port.

I assume that the dev you are in contact with, is the first guy as he seems to enjoy Linux. The other one used Windows while doing the port to Opengl.

As I understand it they could not find any distributed (as in running the build on more then 1 computer) compiling system for linux which was stable enough to be used in production. So the 70 minutes (or 45 minutes with fast build) would have been solely on their 8 core i7 computers.
For a game this size that is still pretty fast. It's not workable for development, but still pretty fast.
0 Likes

View PC info
This video from Techland is GREAT! I hope more video's are published by Linux developers to show the pain & suffering they go through in the Windows gaming world.
I'm happy they took the time to work on a Linux port even if they only had 4 months... it was totally worth it!
I hope they continue to make Linux ports and help other programmers to think mulit-platform when coding.
Thanks for sharing
1 Likes, Who?

View PC info
I wonder if they already use ccache to speed up iterative builds. It's not like it's an obscure piece of software or anything. And even if a complete build takes ages, why would they recompile absolutely everything after every little tweak as they seem to imply? Is it company policy to only do clean builds during development? I hope I misunderstood.

And for distributed compiling on Linux, isn't distcc a fairly common choice?

Lots of questions addressed to nobody in particular...
2 Likes, Who?

View PC info
It's a very good insight into what happens at these larger companies. 2 guys given 4 months to port the game, dealing with all the lovely little things that any comp. sci. class would give a fail for, and being unable to integrate their work into the main development channel (meaning things can change at any moment and they have to play catchup really fast); they did an incredible job. I suspect they're still learning modern OpenGL to boot.
I can only hope that higher ups noticed everything, and have put in place procedures and coding guidelines to ensure a smoother ride for their next title.
1 Likes, Who?

sgtGarcia 23 Apr, 2015
View PC info
I posted it already in other Techland news:

For those who cannot understand polish language ( I really don't know why it may be ) at the end of talk, people asked questions & one of them was what is speed difference between Windows & Linux versions ( both with OpenGL )
& Wojtek said that DL on his Titan ( Windows ) was slower than Tomek GTX780 ( Linux ).

But whats more, Wojtek added that he has some code prepared, that should give boost performance of 50 - 100%.
If this is true, then WOW.
3 Likes, Who?

linux_gamer 23 Apr, 2015
View PC info
If it just takes 2 guys and 4 months to increase the sale of a project of hundred persons and some years by 1% Techland has a good fortune by every Linux game published.
But maybe Linux game devs are paid 10 times as much as the others cause they are rarer...

They definitely had some things to work on. Many problems could have been avoided eg. lower/upper-case names if the "main" devs had more care in the first place.
0 Likes
1/3»
While you're here, please consider supporting GamingOnLinux on: