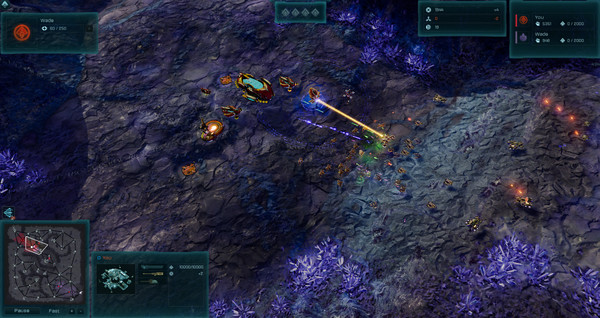 In an impressive show of support, the post from the Stardock CEO asking for Ashes of the Singularity [Steam, GOG] Linux version requests has more posts than reviews on Steam.

The Steam post has 656 replies, with practically all of them requesting a Linux version. The game itself has only 555 reviews in total, which is taking into account the reviews that aren't counted towards the overall score.

Also, if they do a Linux version and you want to see it on GOG, you can vote for that too here.

I would imagine with this level of requests for a Linux version, that it will be done. It will be interesting to see what Stardock do here. If they decide not to, then it will really make me wonder what they were expecting. Getting more requests for the Linux port than the total reviews the game has, should hopefully open a few eyes at Stardock.

As always though, I urge you not to buy it until it is released for Linux. I've seen people say they have now purchased it, which is extremely silly since they could still decide not to. Hopefully that won't affect their Linux sales numbers too much at release. I already own it from some time ago as a gift from someone, but I will likely buy an extra copy or two if it does release for Linux for people I want to play with.

That's another point worth considering when porting to Linux. You're not just doing it for the people who say they will buy it, but the people they might convince to also pick it up, or the people they buy extra copies for. Article taken from GamingOnLinux.com.
Tags: Editorial, GOG, Steam, Strategy, Vulkan
19 Likes, Who?
We do often include affiliate links to earn us some pennies. We are currently affiliated with GOG and Humble Store. See more here.
About the author - Liam Dawe

Ripster 4 Jun, 2017
View PC info
I would have been willing to buy this at full price but just got it in the latest humble monthly bundle. I hope things like that are taken into account when looking at linux sales overall.
2 Likes, Who?

View PC info
Normally I'm following the Linux-request threads of games I'm interested in on the steam forums. But this thread I had to unfollow again :D The response to the devs request is really huge. Haven't seen any other thread exploding like this.
Which is kinda cool!
3 Likes, Who?

Ya know there are DRM free games on steam too :P

View PC info
Now if they would do the same thing for Galactic Civilizations 3.
4 Likes, Who?

Quoting: pete910Ya know there are DRM free games on steam too :P

Yes, although they are not readily labeled as such. Path of least resistance.
0 Likes
ODDity 4 Jun, 2017

My feeling is most people got it "free" through the humble monthly like I did, but I could be wrong.

There seems to be a fair amount of reasonably priced DLC for the game though, so hopefully if/when they do make the port, still some revenue comes from those.
1 Likes, Who?

View PC info
I didn't contribute to the epic Steam thread as this isn't really my kind of game, but if a Linux version comes along, I might just end up buying it as a general show of support. It is meant to be pretty slick too.
2 Likes, Who?

View PC info
This is why I kind of don't like when devs make open-ended statements about requests to show interest. They've still really made no commitment. They can always just keep saying there's "not enough." I think it would be more professional to say, "I'd like to see at least X number of requests." This is about money after all. They should be able to crunch the numbers and set a target for profitability.