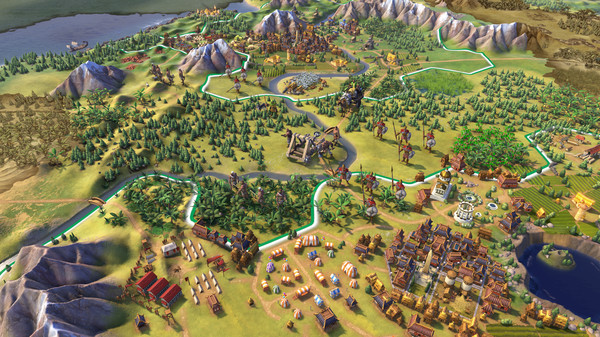 Sad news for those waiting on it, as Aspyr Media have again delayed cross-platform multiplayer for the Linux version of Civilization VI [Steam].

They posted this on Steam earlier:


QuoteHey everyone, status update on the Summer 2017 Patch for Mac/Linux:

It is with huge regret and sad faces that we, again, have to delay the release of cross-platform multiplayer.

We are moving forward with the launch of the Summer 2017 Update for Mac and Linux, which will offer all of the available content as the Windows update. After thorough investigation, we’ve decided that we cannot hold back the content any longer in lieu of some nasty cross-platform bugs.

We’ve consistently stood behind a quality bar for our products, and it’s a standard that our partners and players have also come to expect. For those of you who were looking forward to cross-platform multiplayer, we urge you to understand that should the feature have come into the live environment, desyncs would have been guaranteed and frequent to the point of an extremely poor experience.

It's a real shame, but I really do appreciate how open they're being about the process. It's better to have a stable and enjoyable experience first. Hopefully they will get it nailed before the year is up, because I imagine there's a bunch of people who have been waiting on this on both Linux & Mac.

The Summer Update was released for Windows on July 27th, so we've been waiting nearly a month for this patch. I imagine the large time difference there was due to them trying to get cross-platform multiplayer working. For a complete list of what's coming in the patch, see here from the original release announcement. Article taken from GamingOnLinux.com.
Tags: Aspyr Media, Steam, Strategy
1 Likes
Share

We do often include affiliate links to earn us some pennies. We are currently affiliated with GOG and Humble Store. See more here.
About the author - Liam Dawe
I am the owner of GamingOnLinux. After discovering Linux back in the days of Mandrake in 2003, I constantly came back to check on the progress of Linux until Ubuntu appeared on the scene and it helped me to really love it. You can reach me easily by emailing GamingOnLinux directly.
See more from me
Some you may have missed, popular articles from the last month:
The comments on this article are closed.
19 comments
Page: 1/2»
mraggi 24 Aug, 2017
I'll buy it when everything works :)
3 Likes, Who?

View PC info
Okay, this stuff is really starting go on my nerves. Either external porting companies like Aspyr and Feral need to get it together when it comes to multiplayer or the companies hiring them must integrate them better. First-party/consultant-made ports (which pretty much always seem to work out better it seems) don't have these issues, and they also don't have delayed patch releases. We've had ports that work just fine between operating systems for a long time (like UT99), I wonder what the roadblock is now. Can't imagine that it's really just the often-cited random number generation, that would be really kinda embarrassing and sad for all parties involved.

View PC info
I've never understood Civ being a multiplayer game. A single game typically runs me 20+ hours and that's without having to wait for anybody else to take their turn. Is multiplayer faster somehow or do people really sit there without sleep for days on end to play?
2 Likes, Who?

View PC info
It sounds like there was something in the "we investigate feasibility" in the beginning.

Still, most of Civ games are always singleplayer. I only wish that we would get some technical update. I mean if someone sit down and write down blog what is technically wrong. I always like to read those things.
0 Likes

View PC info
I was about to say "awwww, pooo!", then I suddenly realized I never play Civ in muliplayer. *shrug*
1 Likes, Who?

Quoting: ExpalphalogI've never understood Civ being a multiplayer game. A single game typically runs me 20+ hours and that's without having to wait for anybody else to take their turn. Is multiplayer faster somehow or do people really sit there without sleep for days on end to play?

We have a weekly online gaming round with some friends going. For a while, we played Civ5 there and actually managed to finish two games.

Obviously not going to work for any "quick session".
0 Likes

Quoting: KimyrielleI was about to say "awwww, pooo!", then I suddenly realized I never play Civ in muliplayer. *shrug*

Same here. Cool that it is coming and I'm glad that I had purchased it (as Linux sell of cource ;)). It's a cool game!
0 Likes

View PC info
I remember a game that lasted me six months, singleplayer on civ V (biggest map, slow time). But not every game is like this.

Usually, playing with your friends as an ally is less boring, as they can see your troops.

This is also a good candidate as a "mail-chess"-like (see freeciv 2's website).

A bit sad to hear this. Would love to hear the complete technical analysis of what happens here. The function names, actual differences, etc.

Is it floating point related, RNG related, other? Wine doesn't seem to have a problem with this. Wouldn't using some parts of winelib help? (It is LGPL, so definitely linkable against).
0 Likes
1/2»
While you're here, please consider supporting GamingOnLinux on: